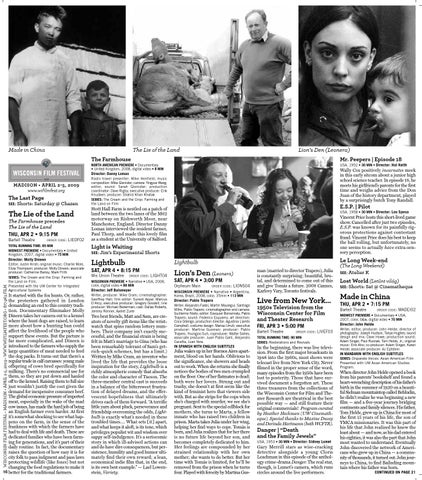 The Lie of the Land

Wally Cox positively incarnates meek in this early sitcom about a junior high school science teacher. In episode 18, he meets his girlfriend’s parents for the first time and weighs advice from the Don Juan of the history department, played by a surprisingly butch Tony Randall.

Stott Hall Farm is nestled on a patch of land between the two lanes of the M62 motorway on Rishworth Moor, near Manchester, England. Director Danny Lomax interviewed the resident farmer, Paul Thorp, and made this lovely film as a student at the University of Salford.

Vincent Price hosts this short-lived game show. Cancelled after just two episodes, E.S.P. was known for its painfully rigorous protections against contestant fraud. Vincent Price does his best to keep the ball rolling, but unfortunately, no one seems to actually have extra-sensory perception.

It started with the fox hunts. Or, rather, the protesters gathered in London demanding an end to this country tradition. Documentary filmmaker Molly Dineen takes her camera out to a kennel where the hunt dogs are raised, to learn more about how a hunting ban could affect the livelihood of the people who support these events. But the picture is far more complicated, and Dineen is introduced to the farmers who supply the large quantities of meat needed to feed the dog packs. It turns out that there’s a regular trade in calf carcasses: young male offspring of cows bred specifically for milking. There’s no commercial use for them, so they are put down and hauled off to the kennel. Raising them to full size just wouldn’t justify the cost given the demand for inexpensive consumer beef. The global economic pressure of imported meat, especially in the wake of the mad cow issues, has made the hard job of being an English farmer even harder. At first it’s somewhat shocking to see what happens on the farm, in the sense of the frankness with which the farmers have had to deal with life and death. These are dedicated families who have been farming for generations, and it’s part of their daily routine. In fact, the documentary raises the question of how easy it is for city folk to pass judgment and pass laws protecting wildlife (like foxes) but not changing the food regulations to make it 16 better for the traditional farmers.

Two best friends, Matt and Sam, are creators of novelty gift items like the wristwatch that spins random lottery numbers. Their company isn’t exactly successful, and the financial strain is being felt in Matt’s marriage to Gina (who has been remarkably tolerant of Sam’s getrich-quick schemes, but has a limit.) Written by Mike Cram, an inventor who lived the life that provides the loose inspiration for the story, Lightbulb is a richly atmospheric comedy that absorbs the color and character of Tucson. The three-member central cast is succeeds in a balance of the bittersweet frustration of delayed dreams, and the effervescent hopefulness that ultimately drives each of them forward. “A terrific little yarn about pluck, perseverance and friendship overcoming the odds, Lightbulb is exactly what’s needed in these troubled times…. What sets [it] apart, and what keeps it aloft, is its tone, which privileges populist wit and wisdom over sappy self-indulgence. It’s a seriocomic story in which ill-advised actions can and do have dire consequences, but persistence, humility and good humor ultimately find their own reward; a lean, economical indie film that, in the end, is its own best example.” — Lael Lowenstein, Variety.

Julia wakes up in her Buenos Aires apartment, blood on her hands. Oblivious to the significance, she showers and heads out to work. When she returns she finally notices the bodies of two men crumpled on the floor. One of her flatmates is dead; both were her lovers. Strung out and trashy, she doesn’t at first seem like the kind of feminist hero that viewers side with. But as she strips for the cops when she’s charged with murder, we see she’s pregnant. Sent to the special cellblock for mothers, she turns to Marta, a fellow inmate who has raised two children in prison. Marta takes Julia under her wing, helping her find ways to cope. Tomás is born, and Julia realizes that for her there is no future life beyond her son, and becomes completely dedicated to him. Her feelings are compounded by her strained relationship with her own mother; she wants to do better. But her time with Tomás is limited, for he’ll be removed from the prison when he turns four. Played with ferocity by Martina Gus-

man (married to director Trapero), Julia is constantly surprising: beautiful, brutal, and determined to come out of this and give Tomás a future. 2008 Cannes, Karlovy Vary, Toronto festivals.

In the beginning, there was live television. From the first major broadcasts in 1948 into the 1960s, most shows were telecast live from New York City. Never filmed in the proper sense of the word, many episodes from the 1950s have been lost to posterity. Those that have survived document a forgotten art. These three treasures from the collections of the Wisconsin Center for Film and Theater Research are theatrical in the best possible way — and still feature their original commercials! Program curated by Heather Heckman (UW Cinematheque). Special thanks to Maxine Ducey and Dorinda Hartmann (both WCFTR).

Gary Merrill stars as wise-cracking detective alongside a young Cloris Leachman in this episode of the anthology crime-drama Danger. The real star, though, is Lumet’s camera, which runs circles around the live performers.

When director John Helde opened a book from his parents’ bookshelf and found a heart-wrenching description of his father’s birth in the summer of 1920 on a beautiful Sichuan mountaintop called Behludin, he didn’t realize he was beginning a new film — and a five-year journey bridging continents and family silences. His father, Tom Helde, grew up in China for most of the first 15 years of his life, the son of YMCA missionaries. It was this part of his life that John realized he knew the least about — and now, as his dad entered his eighties, it was also the part that John most wanted to understand. Eventually John discovered the network of Americans who grew up in China — a community of thousands, it turned out. John journeys to China, to find Bailuding mountain where his father was born. CONTINUED ON PAGE 21