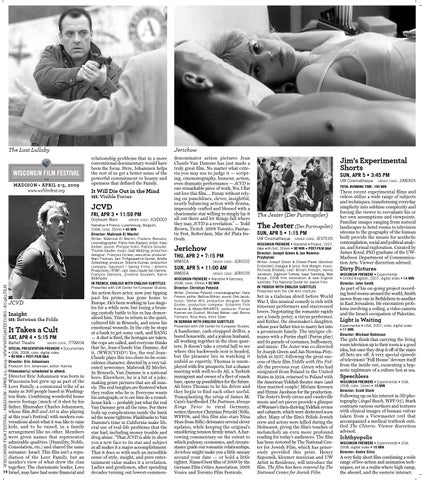 relationship problems that in a more conventional documentary would have been the focus. Here, Johannsen helps the rest of us get a better sense of the powerful commitment to beauty and openness that defined the Family.

It Will Die Out in the Mind SEE: Visible Forces

JCVD Insight SEE: Between the Folds

Director Eric Johannsen was born in Wisconsin but grew up as part of the Love Family, a communal tribe of as many as 300 people based in Washington State. Combining wonderful home movie footage (much of it shot by his father, filmmaker Charles Johannsen, whose film Bill and Art is also playing at this year’s Festival) with modern conversations about what it was like to raise kids, and to be raised, in a family arrangement like no other. Members were given names that represented admirable qualities (Humility, Noble, Consolation, etc.) and shared the same surname: Israel. This film isn’t a repudiation of the Love Family, but an insider’s view of what drew the clan together. The charismatic leader, Love 14 Israel, may have had some financial and

An action-hero actor, now just tipping past his prime, has gone home to Europe. He’s been working in Los Angeles for a while now, but losing a bruising custody battle to his ex has demoralized him. Time to return to the quiet, cultured life in Brussels, and nurse his emotional wounds. In the city he stops at a bank to get some cash, and BANG — A shot is fired, the hostages are taken, the cops are called, and everyone thinks that he, Jean-Claude Van Damme, did it. (WWJCVDD?) Yes, the real JeanClaude plays this too-close-to-be-coincidence character, directed by a very talented newcomer, Mabrouk El Mechri. In Brussels, Van Damme is a national hero. Elsewhere, he is a bit of a joke, making genre pictures that are all muscle. The real burglars are flustered when they realize who he is. Everyone wants his autograph, or to see him do a roundhouse kick — probably just what the real Van Damme gets all the time. For there boils up complications inside the bank ad the noose tightens. Flashbacks to Van Damme’s time in California make liberal use of real-life problems that the star had, including money trouble and drug abuse. “That JCVD is able to show you a new face to its star and subject at all makes it a major accomplishment. That it does so with such an incredible sense of style, insight, and pure entertainment value makes it a revelation. Ladies and gentlemen, after spending decades turning out lowest-common-

denominator action pictures Jean Claude Van Damme has just made a truly great film. No matter what criteria you may use to judge it — scripting, cinematography, humour, action, even dramatic performance — JCVD is one remarkable piece of work. Yes, I flat out love this film…. Funny without relying on punchlines, clever, insightful, neatly balancing action with drama, impeccably crafted and blessed with a charismatic star willing to simply lay it all out there and let things fall where they may, JCVD is a revelation.” — Todd Brown, Twitch. 2008 Toronto, Fantastic Fest, Rotterdam, Mar del Plata festivals.

A handsome, cash-strapped drifter, a bored housewife, and a jealous husband, all working together in the close quarters. It doesn’t take a crystal ball to see where this backwoods noir is headed, but the pleasure lies in watching it unfold so expertly. Thomas is unemployed with few prospects, but a chance meeting with well-to-do Ali, a Turkish immigrant and owner of a fleet of snack bars, opens up possibilities for the future. Ali hires Thomas to be his driver and they begin to find each other useful. Transplanting the setup of James M. Cain’s hardboiled The Postman Always Rings Twice to rural Germany, writer/director Christian Petzold (Yella, WFF08, and this film also stars Nina Hoss from Yella) detonates several clever updates, while keeping the original’s smoldering tension firmly intact. A harrowing commentary on the extent to which jealousy, economics, and circumstance guide our romantic relationships, Jerichow might make you a little uneasy around your date — or hold a little tighter. Named best film of 2008 by the German Film Critics Association. 2008 Venice and Toronto Film Festivals.

Set in a Galician shtetl before World War I, this musical comedy is rich with itinerant performers and starcrossed lovers. Negotiating the romantic rapids are a lonely jester, a circus performer, and Esther, the shoemaker’s daughter, whose poor father tries to marry her into a prominent family. The intrigue climaxes with a Purim shpil (Purim play) and its parade of costumes, buffoonery, and music. The Jester was co-directed by Joseph Green and Jan Nowina-Przybylsk in 1937, following the great success of their film Yiddle with His Fiddle the previous year. Green who had emigrated from Poland to the United States in 1924, returned to Poland with the American Yiddish theater stars (and then married couple) Miriam Kressyn and Hymie Jacobson for the production. The Jester’s lively circus and vaudeville music and set pieces provide a glimpse of Warsaw’s then-thriving Yiddish revues and cabarets, which were destroyed soon after. Many of the film’s Polish-Jewish crew and actors were killed during the Holocaust, giving the film’s touches of melancholy an even more profound reading for today’s audiences. The film has been restored by The National Center for Jewish Film, which has generously provided this print. Henry Sapoznik, klezmer musician and UW Artist in Residence, will introduce the film. The film has been restored by The National Center for Jewish Film.

These recent experimental films and videos utilize a wide range of subjects and techniques, transforming everyday simplicity into sublime complexity and forcing the viewer to reevaluate his or her own assumptions and viewpoints. Familiar images ranging from natural landscapes to hotel rooms to television sitcoms to the geography of the human body provide the means for aesthetic contemplation, social and political analysis, and formal exploration. Curated by James Kreul, PhD graduate of the UWMadison Department of Communication Arts. Viewer discretion advised.

As part of his on-going project recording hotel rooms around the world, Smith moves from one in Bethlehem to another in East Jerusalem. He encounters problems involving a ceiling, a video camera and the Israeli occupation of Palestine.

The girls think that carrying the living room television up to their room is a good idea, but once they drop it off of the stairs all bets are off. A very special episode of television’s “Full House” devours itself from the inside out, excavating a hypnotic nightmare of a culture lost at sea.

Following up on his interest in 3D photography (Angel Beach, WFF 02), Stark contrasts various surfaces and textures with clinical images of human vulvae taken from a Viewmaster reel that accompanied a medical textbook entitled The Clitoris. Viewer discretion advised.

A very fishy short film combining a wide range of live-action and animation techniques, set in a realm where high camp, the absurd, and the esoteric interact.