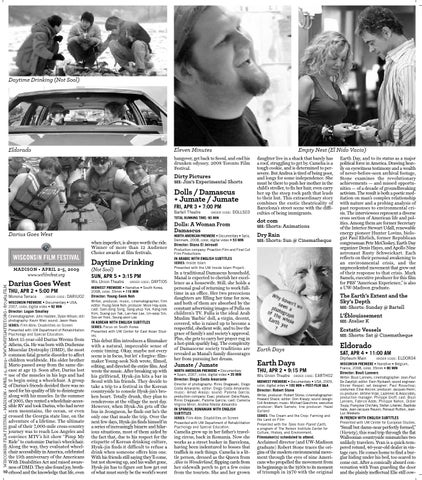 hangover, get back to Seoul, and end his drunken odyssey. 2008 Toronto Film Festival.

Dolls: A Woman From Damascus

Darius Goes West when imperfect, is always worth the ride. Winner of more than 12 Audience Choice awards at film festivals.

Meet 15-year-old Darius Weems from Athens, Ga. He was born with Duchenne Muscular Dystrophy (DMD), the most common fatal genetic disorder to affect children worldwide. His older brother Mario passed away from the same disease at age 19. Soon after, Darius lost use of the muscles in his legs and had to begin using a wheelchair. A group of Darius’s friends decided there was no need for his quality of life to disintegrate along with his muscles. In the summer of 2005, they rented a wheelchair-accessible RV and took Darius, who had never seen mountains, the ocean, or even crossed the Georgia state line, on the adventure of a lifetime. The ultimate goal of their 7,000-mile cross-country journey was to reach Los Angeles and convince MTV’s hit show “Pimp My Ride” to customize Darius’s wheelchair. Along the way, they evaluated wheelchair accessibility in America, celebrated the 15th anniversary of the Americans With Disabilities Act and raised awareness of DMD. They also found joy, broth10 erhood and the knowledge that life, even

This debut film introduces a filmmaker with a natural, impeccable sense of comic timing. Okay, maybe not every scene is in focus, but let’ s forgive: filmmaker Young-seok Noh wrote, filmed, editing, and directed the entire film. And wrote the music. After breaking up with his girlfriend, Hyuk-jin hits a bar in Seoul with his friends. They decide to take a trip to a festival in the Korean countryside to console Hyuk-jin’s broken heart. Totally drunk, they plan to rendezvous at the village the next day. However, when Hyuk-Jin gets off the bus in Jeongseon, he finds out he’s the only one that made the trip. Over the next few days, Hyuk-jin finds himself in a series of increasingly bizarre and hilarious situations, most of them aided by the fact that, due to his respect for the etiquette of Korean drinking culture, Hyuk-jin finds it difficult to refuse a drink when someone offers him one. With his friends still saying they’ll come, but not showing up, and his wallet gone, Hyuk-jin has to figure out how get out of what must surely be the world’s worst

daughter live in a shack that barely has a roof, struggling to get by. Camelia is a tough cookie, and is determined to persevere. But Andrea is tired of being poor, and longs for some independence. She must be there to push her mother in the child’s stroller, to fix her hair, even carry her up the steep rock path that leads to their hut. This extraordinary story combines the exotic theatricality of Barcelona’s street scene with the difficulties of being immigrants.

In a traditional Damascus household, Manal is expected to cherish her excellence as a housewife. Still, she holds a personal goal of returning to work fulltime in an office. Her two precocious daughters are filling her time for now, and both of them are absorbed by the constant advertising images of Fulla on children’s TV. Fulla is the ideal Arab Muslim ‘Barbie’ doll, a virgin, decent, covered, who is raised up to become a respectful, obedient wife, and to live the grace of family’s and society’s approval. Plus, she gets to carry her prayer rug in a hot-pink sparkly bag. The complexity of Damascene society traditions are revealed as Manal’s family discourages her from pursuing her dream.

Camelia grew up in her father’s traveling circus, back in Romania. Now she works as a street busker in Barcelona, having been indentured to bosses that traffick in such things. Camelia is a little person, dressed as the Queen from Alice in Wonderland, flipping cards from her sidewalk perch to get a few coins from the tourists. She and her grown

Earth Day, and to its status as a major political force in America. Drawing heavily on eyewitness testimony and a wealth of never-before-seen archival footage, Stone examines the revolutionary achievements — and missed opportunities — of a decade of groundbreaking activism. The result is both a poetic meditation on man’s complex relationship with nature and a probing analysis of past responses to environmental crisis. The interviewees represent a diverse cross section of American life and politics. Among them are former Secretary of the Interior Stewart Udall, renewable energy pioneer Hunter Lovins, biologist Paul Ehrlich, former Republican congressman Pete McCloskey, Earth Day organizer Denis Hayes, and Apollo Nine astronaut Rusty Schweickart. Each reflects on their personal awakening to an environmental crisis, and the unprecedented movement that grew out of their response to that crisis. Mark Samels, executive producer for this film for PBS’ “American Experience,” is also a UW-Madison graduate.

“Small but damn-near perfectly formed,” (Variety), this road trip through the flat Walloonian countryside mismatches two unlikely travelers. Yvan is a quick-tempered rotund, 40-year-old dealer in vintage cars. He comes home to find a burglar hiding under his bed, too scared to come out. After a comically absurd conversation with Yvan guarding the door and the plainly ineffectual Elie still cow-