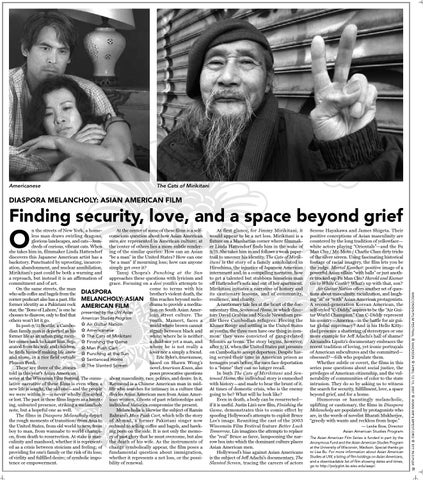 The Cats of Mirikitani

Finding security, love, and a space beyond grief

At first glance, for Jimmy Mirikitani, it would appear to be a net loss. Mirikitani is a fixture on a Manhattan corner where filmmaker Linda Hattendorf finds him in the wake of 9/11. She takes him in and follows a weak papertrail to uncover his identity. The Cats of Mirikitani is the story of a family annihilated in Hiroshima, the injustice of Japanese American internment and, in a compelling narrative, how to get a talented but stubborn homeless man off Hattendorf ’s sofa and out of her apartment. Mirikitani initiates a narrative of history and its cautionary lessons, and of community, resilience, and charity. A cautionary tale lies at the heart of the documentary film, Sentenced Home, in which directors David Grabias and Nicole Newnham profile three Cambodian refugees. Fleeing the Khmer Rouge and settling in the United States as youths, the three men have one thing in common: they were convicted of gang-related felonies as teens. The story begins, however, after 9/11, when the United States put pressure on Cambodia to accept deportees. Despite having served their time in American prison as teenagers years before, the men face deportation to a “home” they can no longer recall. In both The Cats of Mirikitani and Sentenced Home, the individual story is enmeshed with history—and made to bear the brunt of it. At times of domestic crisis, who is the enemy going to be? What will he look like? Even in death, a body can be resurrected— if it is useful. Justin Lin’s new film, Finishing the Game, demonstrates this to comic effect by spoofing Hollywood’s attempts to exploit Bruce Lee’s image. Reuniting the cast of the 2003 Wisconsin Film Festival feature Better Luck Tomorrow, Lin imagines the attempts to replace the “real” Bruce as farce, lampooning the narrow box into which the dominant culture places Asian American men. Hollywood’s bias against Asian Americans is the subject of Jeff Adachi’s documentary, The Slanted Screen, tracing the careers of actors

Sessue Hayakawa and James Shigeta. Their positive conceptions of Asian masculinity are countered by the long tradition of yellowface— white actors playing “Orientals”—and the Fu Man Chu / Mr. Moto / Charlie Chan dirty tricks of the silver screen. Using fascinating historical footage of racial imagery, the film lets you be the judge. Mortal Kombat: positive image of a powerful Asian villain “with balls” or just another trucked-up Fu Man Chu? Harold and Kumar Go to White Castle? What’s up with that, son? Air Guitar Nation offers another set of questions about masculinity, racialization, and laughing “at” or “with” Asian American protagonists. A second-generation Korean American, the self-styled “C-Diddy,” aspires to be the “Air Guitar World Champion.” Can C-Diddy represent his country—America—in the battle for air guitar global supremacy? And is his Hello Kittyclad presence a shattering of stereotypes or one more example for Jeff Adachi’s hall of shame? Alexandra Lipsitz’s documentary embraces the recent tradition of loving, yet ironic portrayals of American subcultures and the committed— obsessed?—folk who populate them. Whether subtle or covert, the films in this series pose questions about social justice, the privileges of American citizenship, and the vulnerability of communities of color to the state intrusion. They do so by asking us to witness the search for security, fulfillment, love, a space beyond grief, and for a home. Humorous or hauntingly melancholic, uplifting or cautionary, the films in Diaspora Melancholy are populated by protagonists who are, in the words of novelist Bharati Mukherjee, “greedy with wants and reckless from hope.” — Leslie Bow, Director Asian American Studies Program The Asian American Film Series is funded in part by the Anonymous Fund and the Asian American Studies Program at the University of Wisconsin, Madison. Special thanks go to Lisa Bu. For more information about Asian American Studies at UW, a listing of film holdings on Asian Americans, and a downloadable list of film showing dates and times, go to http://polyglot.lss.wisc.edu/aasp/.

n the streets of New York, a homeAt the center of some of these films is a selfless man draws swirling dragons, conscious question about how Asian American glorious landscapes, and cats—hunmen are represented in American culture; at dreds of curious, vibrant cats. When the center of others lies a more subtle rendershe takes him in, filmmaker Linda Hattendorf ing of the similar queries: How can an Asian discovers this Japanese American artist has a “be a man” in the United States? How can one backstory. Punctuated by uprooting, incarcer- “be a man” if mourning loss; how can anyone ation, abandonment, and nuclear annihilation, simply get over it? Mirikitani’s past could be both a warning and Tanuj Chopra’s Punching at the Sun a reproach, but instead it is an affirmation of approaches these questions with lyricism and commitment and of art. grace. Focusing on a desi youth’s attempts to On the same streets, the man come to terms with his who sells coffee and bagels from the DIASPORA brother’s violent death, the corner pushcart also has a past. His MELANCHOLY: ASIAN film reaches beyond meloformer identity as a Pakistani rock AMERICAN FILM drama to provide a meditastar, the “Bono of Lahore,” is one he tion on South Asian Amerpresented by the UW Asian chooses to disavow, only to find that ican street culture. The American Studies Program others won’t let it go. youth, Mameet, faces a In post-9/11 Seattle, a Cambo- ✿ Air Guitar Nation world where brown cannot dian family man is deported as his ✿ Americanese signify between black and former life as an urban gang mem- ✿ The Cats of Mirikitani white, where he is neither ber comes back to haunt him. Sep- ✿ Finishing the Game a child nor yet a man, and arated from his wife and children, ✿ Man Push Cart where he is not really a he finds himself making life anew ✿ Punching at the Sun lover nor a simply a friend. and alone, in a rice field outside ✿ Sentenced Home Eric Byler’s Americanese, Phnom Penh. based on Shawn Wong’s ✿ The Slanted Screen These are three of the stories novel American Knees, also told in this year’s Asian American poses provocative questions series at the Wisconsin Film Festival. The cumu- about masculinity, race, politics, and desire. In it, lative narrative of these films is even when a Raymond is a Chinese American man in midnew life is sought, the old one—and the people life who searches for intimacy in a culture that we were within it—is never wholly discarded divides Asian American men from Asian Ameror lost. The past in these films lingers as a hauntican women. Ghosts of past relationships and ing, unburied presence, striking a melancholy individual histories compromise the present. note, but a hopeful one as well. Melancholia is likewise the subject of Ramin The films in Diaspora Melancholy depict Bahrani’s Man Push Cart, which tells the story the rough moments of transition: from Asia to of Ahmad, a former Pakistani singer now the United States, from old world to new, from reduced to selling coffee and bagels, and hawkboy to man, from wannabe to world champi- ing porn on the side. It is not only the memoon, from death to resurrection. At stake is mas- ry of past glory that he must overcome, but also culinity and manhood, whether it is represent- the death of his wife. As the instruments of ed as a crisis between stoicism and feeling; of change symbolically appear, the film poses a providing for one’s family or the risk of its loss; fundamental question about immigration, of virility and fulfilled desire; of symbolic impowhether it represents a net loss, or the possitence or empowerment. bility of renewal.