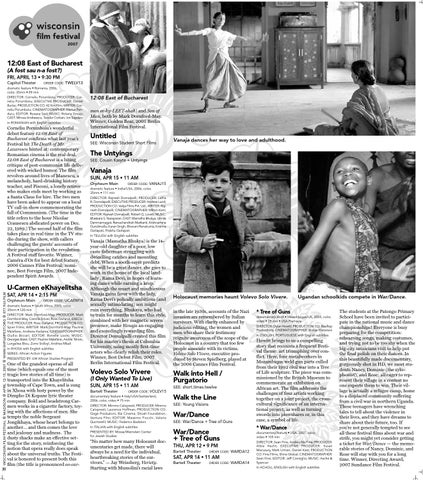 Corneliu Porumboiu’s wonderful debut feature 12:08 East of Bucharest confirms what last year’s Festival hit The Death of Mr. Lazarescu hinted at: contemporary Romanian cinema is the real deal. 12:08 East of Bucharest is a biting critique of post-communist life delivered with wicked humor. The film revolves around lives of Manescu, a melancholy, hard-drinking history teacher, and Pisconi, a lonely retiree who makes ends meet by working as a Santa Claus for hire. The two men have been asked to appear on a local TV call-in show commemorating the fall of Communism. (The time in the title refers to the hour Nicolae Ceausescu abdicated power on Dec. 22, 1989.) The second half of the film takes place in real time in the TV studio during the show, with callers challenging the guests’ accounts of their participation in the revolution. A Festival staff favorite. Winner, Caméra d’Or for best debut feature, 2006 Cannes Film Festival; nominee, Best Foreign Film, 2007 Independent Spirit Awards.

One of the grandest operas of all time (which equals one of the most tragic love stories of all time) is transported into the Khayelitsha township of Cape Town, and is sung in Xhosa with lusty power by the Dimpho Di Kopane lyric theater company. Bold and headstrong Carmen works in a cigarette factory, toying with the affections of men. She tempts the noble Sergeant Jongikhaya, whose heart belongs to another… and then comes the love and jealousy and madness. The dusty shacks make an effective setting for the story, reinforcing the notion that opera really does speak about the universal truths. The Festival is honored to present both this film (the title is pronounced oo-car-

Vanaja dances her way to love and adulthood.

Vanaja (Mamatha Bhukya) is the 14year-old daughter of a poor, low caste fisherman struggling with dwindling catches and mounting debt. When a sooth-sayer predicts she will be a great dancer, she goes to work in the house of the local landlady , Rama Devi, in hopes of learning dance while earning a keep. Although the smart and mischievous Vanaja gains favor with the lady, Rama Devi’s polically ambitious (and sexually intimidating) son might ruin everything. Bhukaya, who had to train for months to learn this style, combined with her magnetic screen presence, make Vanaja an engaging and exceedingly rewarding film. Director Domalpalli created this film for his master’s thesis at Columbia University, using mostly first-time actors who clearly relish their roles. Winner, Best Debut Film, 2007 Berlin International Film Festival.

Volevo Solo Vivere (I Only Wanted To Live) SUN, APR 15 • 11 AM Bartell Theater

“No matter how many Holocaust documentaries get made, there will always be a need for the individual, heartbreaking stories of the survivors.” — Jay Weissberg, Variety. Starting with Mussolini’s racial laws

Holocaust memories haunt Volevo Solo Vivere. in the late 1930s, accounts of the Nazi invasion are remembered by Italian survivors. With clarity enhanced by judicious editing, the women and men who share their testimony reignite awareness of the scope of the Holocaust in a country that too few people associate with its victims. Volevo Solo Vivere, executive produced by Steven Spielberg, played at the 2006 Cannes Film Festival.

Howitt brings to us a compelling story that recounts a frequent Festival theme: art triumphing over conflict. Here, four metalworkers in Mozambique weld gun parts culled from their 1992 civil war into a Tree of Life sculpture. The piece was commissioned by the British Museum to commemorate an exhibition on African art. The film addresses the challenges of four artists working together on a joint project, the crosscultural significance of an international project, as well as turning swords into plowshares or, in this case, a symbol of life.

The students at the Patongo Primary School have been invited to participate in the national music and dance championships! Everyone is busy preparing for the competition: rehearsing songs, making costumes, and trying not to be too shy when the big-city musicians visit to help put the final polish on their dances. In this beautifully made documentary, gorgeously shot in HD, we meet students Nancy, Dominic (the xylophonist), and Rose: all eager to represent their village in a contest no one expects them to win. Their village is actually a refugee camp, home to a displaced community suffering from a civil war in northern Uganda. These teenagers have wrenching tales to tell about the violence in their lives, and they have dreams to share about their future, too. If you’re not generally tempted to see all these festival films about war and strife, you might yet consider getting a ticket for War/Dance — the memorable stories of Nancy, Dominic, and Rose will stay with you for a long time. Winner, Directing Award, 2007 Sundance Film Festival.