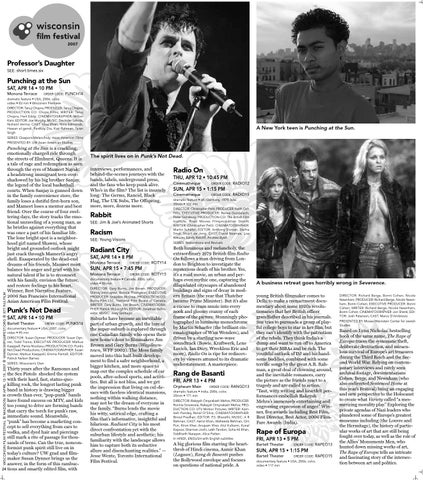 Punching at the Sun is a crackling, emotionally charged ride through the streets of Elmhurst, Queens. It is a tale of rage and redemption as seen through the eyes of Mameet Nayak: a headstrong immigrant teen overshadowed by his big brother Sanjay, the legend of the local basketball courts. When Sanjay is gunned down in the family convenience store, the family loses a dutiful first-born son, and Mameet loses a mentor and best friend. Over the course of four sweltering days, the story tracks the emotional unraveling of a young man, as he bristles against everything that was once a part of his familiar life. The lone bright spot is a neighborhood girl named Shawni, whose bright and grounded outlook might just crack through Mameet’s angry shell. Exasperated by the dead-end dreams of his friends, Mameet must balance his anger and grief with his natural talent if he is to reconnect with his family, envision the future, and restore feelings to his heart. Winner, Best Narrative Feature, 2006 San Francisco International Asian American Film Festival.

Thirty years after the Ramones and the Sex Pistols shocked the system with their hard, fast, status-quokilling rock, the longest lasting punk band in history is drawing bigger crowds than ever, “pop-punk” bands have found success on MTV, and kids too young to drive are forming bands that carry the torch for punk’s raw, immediate sound. Meanwhile, “punk” has become a marketing concept to sell everything from cars to vodka, and dyed hair and piercings still mark a rite of passage for thousands of teens. Can the true, nonconformist punk spirit still live on in today’s culture? UW grad and filmmaker Susan Dynner brings us the answer, in the form of this rambuc24 tious and smartly edited film, with

A New York teen is Punching at the Sun.

The spirit lives on in Punk’s Not Dead. interviews, performances, and behind-the-scenes journeys with the bands, labels, underground press, and the fans who keep punk alive. Who’s in the film? The list is insanely long: The Germs, Rancid, Black Flag, The UK Subs, The Offspring, more, more, dozens more.

Suburbs have become an inevitable part of urban growth, and the lure of the super-suburb is explored through one Canadian family who opens their new home’s door to filmmakers Jim Brown and Gary Burns (Waydowntown, WFF 2002). The Moss family moved into this half-built development to find a safer neighborhood, a bigger kitchen, and more space to map out the complex schedule of car pools, after-school sports, and activities. But all is not bliss, and we get the impression that living on cul-desacs with faceless identical mansions, nothing within walking distance, may not be the dream of everyone in the family. “Burns lends the movie his witty, satirical edge, crafting a film that’s informative, insightful and hilarious. Radiant City is his most direct confrontation yet with the suburban lifestyle and aesthetic; his familiarity with the landscape allows him to capture both its seductive allure and disenchanting realities.” — Jesse Wente, Toronto International Film Festival.

Both luminous and melancholy, the extraordinary 1979 British film Radio On follows a man driving from London to Brighton to investigate the mysterious death of his brother. Yes, it’s a road movie, an urban and perhaps even mythic one, capturing the dilapidated cityscapes of abandoned buildings and signs of decay in modern Britain (the year that Thatcher became Prime Minister). But it’s also a excuse to cram music into every nook and gloomy cranny of each frame of the picture. Stunningly photographed in luminous monochrome by Martin Schaefer (the brilliant cinematographer of Wim Wenders), and driven by a startling new-wave soundtrack (Bowie, Kraftwerk, Lene Lovich, Ian Dury, Wreckless Eric and more), Radio On is ripe for rediscovery by viewers attuned to its dramatic understatement. A masterpiece.

A business retreat goes horribly wrong in Severence. young British filmmaker comes to Delhi to make a reenactment documentary about some 1920s revolutionaries that her British officer grandfather described in his journals. Sue tries to pursuade a group of playful college boys to star in her film, but they can’t identify with the patriotism of the rebels. They think India’s a dump and want to run off to America to get their MBAs and be rich. The youthful outlook of DJ and his handsome buddies, combined with some terrific songs by the great A.R. Rahman, a great deal of clowning around, and the inevitable romances, carry the picture as the friends react to a tragedy and are called to action. “Taut, witty writing and heartfelt performances embellish Rakeysh Mehra’s immensely entertaining and engrossing expression of anger.” Winner, five awards including Best Film, Best Director, Best Actor, 2006 FilmFare Awards (India).

Based on Lynn Nicholas’ bestselling book of the same name, The Rape of Europa traces the systematic theft, deliberate destruction, and miraculous survival of Europe’s art treasures during the Third Reich and the Second World War. Relying on contemporary interviews and rarely seen archival footage, documentarians Cohen, Berge, and Newnham (who also codirected Sentenced Home at this year’s Festival) bring an engaging and new perspective to the Holocaust to create what Variety called “a mesmerizing morality play.” Exploring the private agendas of Nazi leaders who plundered some of Europe’s greatest museums including (the Louvre and the Hermitage), the history of particular works of art that are still being fought over today, as well as the role of the Allies’ Monuments Men, who hunted down missing works of art, The Rape of Europa tells an intricate and fascinating story of the intersection between art and politics.