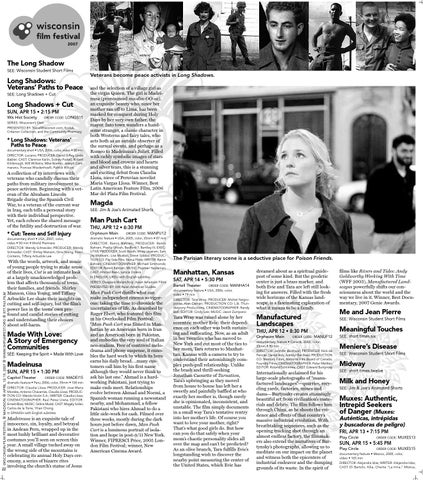 SERIES: Wisconsin’s Own PRESENTED BY: TravelWisconsin.com, Kodak, Criterion Collection, and the Community Pharmacy

A collection of 19 interviews with veterans who candidly discuss their paths from military involvement to peace activism. Beginning with a veteran of the Abraham Lincoln Brigade during the Spanish Civil War, to a veteran of the current war in Iraq, each tells a personal story with their individual perspective. Yet, each echoes the shared message of the futility and destruction of war.

* Cut: Teens and Self Injury

With the words, artwork, and music of young people trying to make sense of their lives, Cut is an intimate look at a largely unacknowledged problem that affects thousands of teens, their families, and friends. Shirley Manson, Gina Young, and Tiffany Arbuckle Lee share their insights on cutting and self-injury, but the film’s power lies in the teens’ own profound and candid stories of cutting and understanding their choices about self-harm.

Madeinusa is an exquisite tale of innocence, sin, loyalty, and betrayal in Andean Peru, wrapped up in the most lushly brilliant and decorative costumes you’ll seen on screen this year. A small village tucked away on the wrong side of the mountains is celebrating its annual Holy Days ceremony, a series of bizarre rites involving the church’s statue of Jesus

Veterans become peace activists in Long Shadows. and the selection of a village girl as the virgin Queen. The girl is Madeinusa (pronounced ma-din-OO-sa), an exquisite beauty who, since her mother ran off to Lima, has been marked for conquest during Holy Days by her very own father, the mayor. Into town wanders a handsome stranger, a classic character in both Westerns and fairy tales, who acts both as an outside observer of the surreal events, and perhaps as a Romeo to Madeinusa’s Juliet. Filled with richly symbolic images of stars and blood and crowns and hearts and silver tears, this is a stunning and exciting debut from Claudia Llosa, niece of Peruvian novelist Maria Vargas Llosa. Winner, Best Latin American Feature Film, 2006 Mar del Plata Film Festival.

Man Push Cart distills what can make independent cinema so vigorous: taking the time to chronicle the uncertainties of life. As described by Roger Ebert, who featured this film in his Overlooked Film Festival: “Man Push Cart was filmed in Manhattan by an American born in Iran and an American born in Pakistan, and embodies the very soul of Italian neo-realism. Free of contrived melodrama and phony suspense, it ennobles the hard work by which its hero earns his daily bread….many customers call him by his first name although they would never think to ask his last one.” Ahmad is a hardworking Pakistani, just trying to make ends meet. Relationships evolve between Ahmad and Noemi, a Spanish woman running a newsstand nearby, and Mohammad, a fellow Pakistani who hires Ahmad to do a little side-work for cash. Filmed over three weeks, mostly during the dark hours just before dawn, Man Push Cart is a luminous portrait of isolation and hope in post-9/11 New York. Winner, FIPRESCI Price, 2005 London Film Festival; winner, New American Cinema Award.

The Parisian literary scene is a seductive place for Poison Friends.

Tara Wray was raised alone by her eccentric mother Evie: their dependence on each other was both sustaining and suffocating. Now, as an adult in her twenties who has moved to New York and cut most of the ties to her mom, Tara returns to Manhattan, Kansas with a camera to try to understand their astonishingly complex push-pull relationship. Unlike the brash and thrill-seeking Jonathan Caouette of Tarnation, Tara’s upbringing as they moved from house to house has left her a sweetly and painfully baffled at who exactly her mother is, though surely she is opinionated, inconsistent, and unstable. The film simply documents in a small way Tara’s tentative rentry into her mother’s life. Of course you want to love your mother, right? That’s what good girls do. But how can you do that safely when your mom’s chaotic personality slides all over the map and can’t be predicted? As an olive branch, Tara fulfills Evie’s longstanding wish to discover the nearby point measuring the center of the United States, which Evie has

dreamed about as a spiritual guidepost of some kind. But the geodetic center is just a brass marker, and both Evie and Tara are left still looking for answers. Filled with the fresh wide horizons of the Kansas landscape, is a fascinating exploration of what it means to be a family.

films like Rivers and Tides: Andy Goldworthy Working With Time (WFF 2003), Manufactured Landscapes powerfully shifts our consciousness about the world and the way we live in it. Winner, Best Documentary, 2007 Genie Awards.

Internationally acclaimed for his large-scale photographs of “manufactured landscapes”—quarries, recycling yards, factories, mines and dams—Burtynsky creates stunningly beautiful art from civilization’s materials and debris. The film follows him through China, as he shoots the evidence and effects of that country’s massive industrial revolution. With breathtaking sequences, such as the opening tracking shot through an almost endless factory, the filmmakers also extend the narratives of Burtynsky’s photographs, allowing us to meditate on our impact on the planet and witness both the epicenters of industrial endeavor and the dumping grounds of its waste. In the spirit of