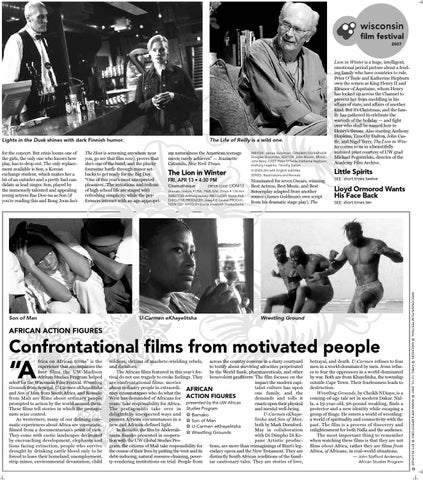 Lights in the Dusk shines with dark Finnish humor. for the concert. But crisis looms one of the girls, the only one who knows how play, has to drop out. The only replacement available is Son, a Korean exchange student, which makes her a bit of an outsider and a pretty bad candidate as lead singer. Son, played by the immensely talented and appealing young actress Bae Doo-na as Son (if you’re reading this and Bong Joon-ho’s

The Life of Reilly is a wild one.

The Host is screening anywhere near you, go see that film now), proves that she’s one of the band, and the plucky foursome battle through minor setbacks to get ready for the Big Day. “One of this year’s most unexpected pleasures...The irritations and tedium of high school life are staged with refreshing simplicity, while the performers interact with an age-appropri-

Nominated for seven Oscars, winning Best Actress, Best Music, and Best Screenplay adapted from another source (James Goldman’s own script from his dramatic stage play), The

frica on African terms” is the experience that accompanies the four films the UW-Madison African Studies Program helped select for the Wisconsin Film Festival. Wrestling Grounds from Senegal, U-Carmen eKhayelitsha and Son of Man from South Africa, and Bamako from Mali are films about ordinary people prompted to action by the world around them. These films tell stories in which the protagonists seize control. As westerners, many of our defining cinematic experiences about Africa are voyeuristic, filmed from a documentarian’s point of view. They come with exotic landscapes decimated by encroaching development, elephants and lions facing extinction, people who survive drought by drinking cattle blood only to be forced to leave their homeland, unemployment, strip mines, environmental devastation, child

soldiers, victims of machete-wielding rebels, across the country convene in a dusty courtyard and dictators. to testify about surviving atrocities perpetrated The African films featured in this year’s fesby the World Bank, pharmaceuticals, and other tival do not use tragedy to evoke feelings. They benevolent profiteers. The film focuses on the are confrontational films: movies impact the modern capiabout ordinary people in extraordi- AFRICAN talist culture has upon nary circumstances who do what the one family, and the West has demanded of Africans for ACTION FIGURES demands and tolls it years: take responsibility for Africa. presented by the UW African enacts upon their physical The protagonists take over in Studies Program and mental well-being. delightfully unexpected ways and ✿ Bamako U-Carmen eKhayepresent African circumstances in a ✿ Son of Man litsha and Son of Man, new and African-defined light. both by Mark Dornford✿ U-Carmen eKhayelitsha In Bamako, the film by Abderrah- ✿ Wrestling Grounds May in collaboration mane Sissako presented in cooperawith Di Dimpho Di Kotion with the UW Global Studies Propane Artistic producgram, the citizens of Mali take responsibility for tions, are more than reimaginings of Bizet’s legthe course of their lives by putting the west and its endary opera and the New Testament. They are debt-inducing, natural resource-draining, poverdistinctly South African renditions of the familty-rendering institutions on trial. People from iar cautionary tales. They are stories of love,

betrayal, and death. U-Carmen refuses to fear men in a world-dominated by men. Jesus refuses to fear the oppressors in a world-dominated by war. Both are from Khayelitsha, the township outside Cape Town. Their fearlessness leads to destruction. Wrestling Grounds, by Cheikh NDiaye, is a coming-of-age tale set in modern Dakar. Nalla, a 19-year-old, 98-pound weakling, finds a protector and a new identity while escaping a group of thugs. He enters a world of wrestling: a world of spirituality and connectivity with the past. The film is a process of discovery and enlightenment for both Nalla and the audience. The most important thing to remember when watching these films is that they are not films about Africa, rather they are films from Africa, of Africans, in real-world situations. — John Stafford Anderson, African Studies Program

Lion in Winter is a huge, intelligent, emotional period picture about a feuding family who have countries to rule. Peter O’Toole and Katherine Hepburn own the screen as King Henry II and Eleanor of Aquitaine, whom Henry has locked up across the Channel to prevent her from meddling in his affairs of state, and affairs of another kind. But it’s Christmas, and the family has gathered to celebrate the warmth of the holiday — and fight over who shall be named heir to Henry’s throne. Also starring Anthony Hopkins, Timothy Dalton, John Castle, and Nigel Terry, The Lion in Winter comes to us in a beautifully restored print courtesy of UW grad Michael Pogorzelski, director of the Academy Film Archive.