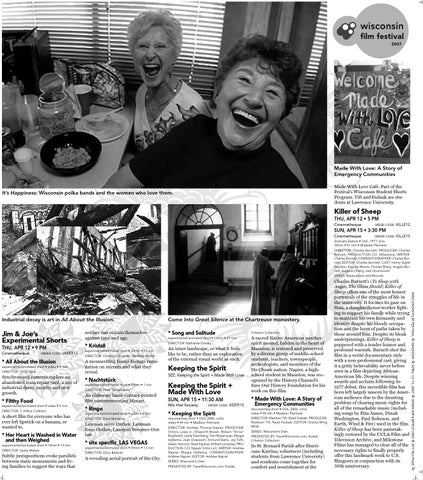 Made With Love: A Story of Emergency Communities Made With Love Café. Part of the Festival’s Wisconsin Student Shorts Program. Tift and Fadaak are students at Lawrence University.

It’s Happiness: Wisconsin polka bands and the women who love them.

neither can sustain themselves against time and age.

A mesmerizing found-footage rumination on mirrors and what they reveal.

A short film for everyone who has ever left lipstick on a banana, or wanted to.

* Her Heart is Washed in Water and then Weighed experimental/animated short • 16mm • 13 min DIRECTOR: Sasha Waters

Come Into Great Silence at the Chartreuse monastery. * Song and Solitude

An inner landscape, or what it feels like to be, rather than an exploration of the external visual world as such.

A sacred Native American panther spirit mound, hidden in the heart of Mauston, is restored and preserved by a diverse group of middle-school students, teachers, townspeople, archeologists, and members of the Ho Chunk nation. Napier, a highschool student in Mauston, was recognized by the History Channel’s Save Our History Foundation for his work on this film.

In St. Bernard Parish after Hurricane Katrina, volunteers (including students from Lawrence University) and residents come together for comfort and nourishment at the

Industrial decay is art in All About the Illusion.

Charles Burnett’s (To Sleep with Anger, The Glass Shield) Killer of Sheep offers one of the most honest portrayals of the struggles of life in the inner-city. It focuses its gaze on Stan, a slaughterhouse worker fighting to support his family while trying to maintain his own humanity and identity despite his bloody occupation and the lures of paths taken by those around him. Despite its bleak underpinnings, Killer of Sheep is peppered with a tender humor and profound warmth. Burnett shot the film in a verité documentary style with a non-professional cast, giving it a gritty believability never before seen in a film depicting AfricanAmerican life. Despite winning awards and acclaim following its 1977 debut, this incredible film has been left largely unseen by the American audience due to the daunting problem of clearing music rights for all of the remarkable music (including songs by Etta James, Dinah Washington, Paul Robeson, and Earth, Wind & Fire) used in the film. Killer of Sheep has been painstakingly restored by the UCLA Film and Television Archive, and Milestone Films has managed to clear all of the necessary rights to finally properly offer this landmark work to U.S. filmgoers in conjunction with its 30th anniversary.