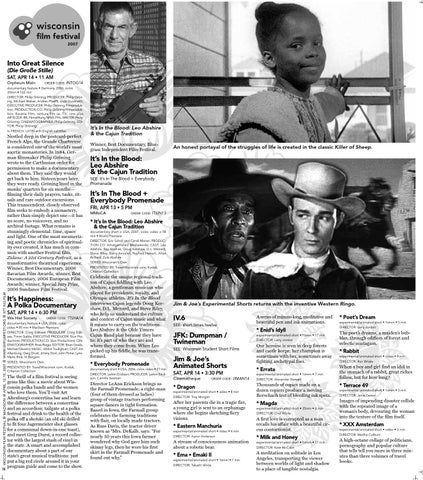 Nestled deep in the postcard-perfect French Alps, the Grande Chartreuse is considered one of the world’s most ascetic monasteries. In 1984, German filmmaker Philip Gröning wrote to the Carthusian order for permission to make a documentary about them. They said they would get back to him. Sixteen years later, they were ready. Gröning lived in the monks’ quarters for six months— filming their daily prayers, tasks, rituals and rare outdoor excursions. This transcendent, closely observed film seeks to embody a monastery, rather than simply depict one—it has no score, no voiceover, and no archival footage. What remains is stunningly elemental: time, space and light. One of the most mesmerizing and poetic chronicles of spirituality ever created, it has much in common with another Festival film, Zidane: A 21st Century Portrait, as a transformative theatrical experience. Winner, Best Documentary, 2006 Bavarian Film Awards; winner, Best Documentary, 2006 European Film Awards; winner, Special Jury Prize, 2006 Sundance Film Festival.

The thrill of a film festival is seeing gems like this: a movie about Wisconsin polka bands and the women who love them. You’ll visit Art Altenburg’s concertina bar and learn the difference between a concertina and an accordion; tailgate at a polka festival and drink to the health of the polka off a shotski (an old ski drilled to fit four Jagermeister shot glasses for a communal down-in-one toast), and meet Greg Durst, a record collector with the largest stash of vinyl in the state. A smart and accomplished documentary about a part of our state’s great musical traditions: just put a big red circle around it in your program guide and come to the show.

An honest portayal of the struggles of life is created in the classic Killer of Sheep.

It’s In the Blood: Leo Abshire & the Cajun Tradition SEE: It’s In The Blood + Everybody

Celebrate the unique regional traditon of Cajun fiddling with Leo Abshire, a gentleman musician who played for presidents, royalty, and Olympic athletes. It’s In the Blood interviews Cajun legends Doug Kershaw, D.L. Menard, and Steve Riley, who help us understand the culture and context of Cajun music and what it means to carry on the traditions. Leo Abshire & the Olde Timers Cajun Band play because they have to: it’s part of who they are and where they come from. When Leo picked up his fiddle, he was transformed.

Director LeAnn Erickson brings us the Farmall Promenade, a eight-man (four of them dressed as ladies) group of vintage tractors performing square dances in tight formation. Based in Iowa, the Farmall group celebrates the farming traditions with flair, on locally made tractors. As Russ Davis, the tractor driver known as “Mrs. DeKalb, says: “For nearly 50 years this Iowa farmer wondered why God gave him such skinny legs, then he wore his first skirt in the Farmall Promenade and found out why.”

Our heroine is seen in deep forests and castle keeps; her champion is sometimes with her, sometimes away fighting archetypal foes.

After her parents die in a tragic fire, a young girl is sent to an orphanage where she begins sketching fiery visions.

A stream of consciousness animation about a robotic bear.

Thousands of copies made on a dozen copiers produce a moving Rorschach test of bleeding ink spots.

A first love is corrupted as a man recalls his affair with a beautiful circus contortionist.

A meditation on solitude in Los Angeles, transporting the viewer between worlds of light and shadow to a place of tangible nostalgia.

The poet’s dreams, a maiden’s bubbles, through edifices of forest and eclectic contagion.

When a boy and girl find an idol in the stomach of a rabbit, great riches follow, but for how long?

Images of impending disaster collide with the repeated image of a woman’s body, devouring the woman into the texture of the film itself.

A high-octane collage of politicians, pornography and popular culture that tells tell you more in three minutes than three volumes of travel books.