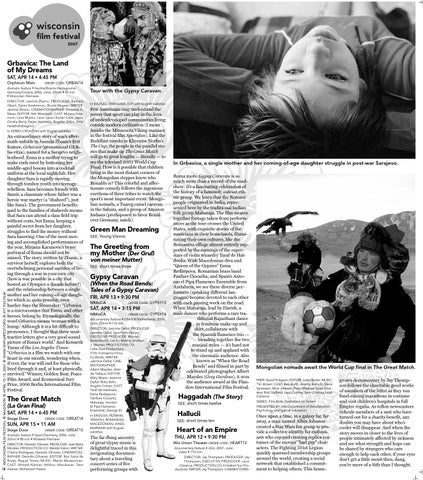 An extraordinary story of war’s aftermath unfolds in Jasmila Zbanic’s first feature, Grbavica (pronounced GERba-vitza), named for a Sarajevo neighborhood. Esma is a mother trying to make ends meet by buttoning her middle-aged bosom into a cocktail uniform at the local nightclub. Her daughter Sara is rapidly moving through tomboy youth into teenage rebellion. Sara becomes friends with Samir, a classmate whose father was a heroic war martyr (a “shaheed”), just like Sara’s. The government benefits paid to the families of shaheeds means that Sara can attend a class field trip without costs, but Esma, keeping a painful secret from her daughter, struggles to find the money without Sara knowing. One of the most moving and accomplished performances of the year, Mirjana Karanovic’s brave portrayal of Esma should not be missed. The story, written by Zbanic, a survivor herself, explores both the overwhelming personal sacrifice of living through a war in your own city (how is war possible in a city that hosted an Olympics a decade before?) and the relationship between a single mother and her coming-of-age daughter which is, quite possibly, even harder. Says the filmmaker: “Grbavica is a microcosmos that Esma, and other heroes, belong to. Etymologically, the word Grbavica means ‘woman with a hump.’ Although it is a bit difficult to pronounce, I thought that these unattractive letters give a very good sound picture of Esma’s world.” And Kenneth Turan of the Los Angeles Times: “Grbavica is a film we watch with our heart in our mouth, wondering when, if ever, the war will end for those who lived through it and, at least physically, survived.” Winner, Golden Bear, Peace Film Award, and Ecumenical Jury Prize, 2006 Berlin International Film Festival.

Tour with the Gypsy Caravan. In KAZAJO, TAMASHEK,TUPÍ with English subtitles

Few Americans may understand the power that sport can play in the lives of underdeveloped communities living outside modern civilization (I mean besides the Minnesota Viking maniacs in the festival film Sportsfan). Like the Buddhist monks in Khyentse Norbu’s The Cup, the people in the parallel stories that make up The Great Match will go to great lengths — literally — to see the televised 2002 World Cup Final. How is it possible that children living in the most distant corners of the Mongolian steppes know who Ronaldo is? This colorful and affectionate comedy follows the ingenious exertions of three tribes to watch the sport’s most important event: Mongolian nomads, a Tuareg camel caravan in the Sahara, and a group of Amazon Indians (predisposed to favor Brazil over Germany, natch).

In Grbavica, a single mother and her coming-of-age daughter struggle in post-war Sarajevo. Roma roots. Gypsy Caravan is so much more than a record of the roadshow: it’s a fascinating celebration of the history of a famously outcast ethnic group. We learn that the Romani people originated in India, represented here by the traditional Indian folk group Maharaja. The film weaves together footage taken from performances as the tour crosses the United States, with exquisite stories of the musicians in their homelands, illuminating their own cultures, like the Romanina village almost entirely supported by the earnings of the superstars of violin wizardry Taraf de Haïdouks. With Macedonian diva and “Queen of the Gypsies” Esma Redzepova; Romanian brass band Fanfare Ciocarlia; and Spain’s Antonio el Pipa Flamenco Ensemble from Andalucía, we see these diverse performers (speaking different languages) become devoted to each other with each passing week on the road. When Maharaja, lead by Harish, a male dancer who performs a rare traditional Rajasthani dance in feminine make-up and skirt, collaborate with the Spanish flamenco trio — blending together the two musical styles — it’s hard not to stand up and applaud with the cinematic audience. Also known as “When the Road Bends” and filmed in part by celebrated photographer Albert Maysles (Grey Gardens), it won the audience award at the Flanders International Film Festival.

Once upon a time, in a galaxy far, far away, a man named Albin Johnson created a Star Wars fan group to provide a collective identity for enthusiasts who enjoyed creating replica costumes of the movies’ “bad guy” characters. The Fighting 501st Legion quickly spawned membership groups around the world, creating a social network that established a commitment to helping others. This home-

grown documentary by Jay Thompson follows the charitable good works of members of the 501st as they run fund-raising marathons in costume and visit children’s hospitals in full Empire regalia. As teflon newscasters ridicule members of a unit who have turned out for a charity benefit, any doubts you may have about who’s cooler will disappear. And when the story moves in closer to the lives of people intimately affected by sickness and see what strength and hope can be shared by strangers who care enough to help each other, if your eyes don’t get a little moist then, dang, you’re more of a Sith than I thought.