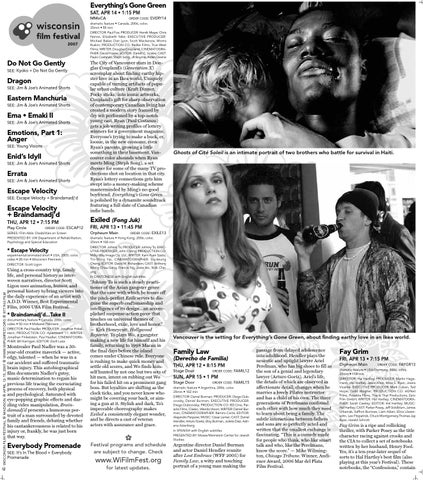 Montrealer Paul Nadler was a 30year-old creative maverick — active, edgy, talented — when he was in a car accident and suffered traumatic brain injury. This autobiographical film documents Nadler’s gutsy, manic determination to regain his previous life tracing the excruciating process of recovery, both physical and psychological. Saturated with eye-popping graphic effects and dazzling video manipulation, Braindamadj’d presents a humorous portrait of a man surrounded by devoted family and friends, debating whether his cantankerousness is related to his injury or, frankly, he was just born that way.

Everybody Promenade SEE: It’s In The Blood + Everybody

Ghosts of Cité Soleil is an intimate portrait of two brothers who battle for survival in Haiti.

The City of Vancouver stars in Douglas Coupland’s (Generation X) screenplay about finding earthy hipster love in an Ikea world. Uniquely capable of turning artifacts of popular urban culture (Kraft Dinner, Pocky sticks) into iconic artworks, Coupland’s gift for sharp observation of contemporary Canadian living has created a modern story framed by dry wit performed by a top-notch young cast. Ryan (Paul Costanzo) gets a job writing profiles of lottery winners for a government magazine. Everyone’s trying to make a buck, er, loonie, in the new economy, even Ryan’s parents, growing a little something in their basement. Vancouver color abounds when Ryan meets Ming (Steph Song), a set dresser for some of the many TV productions shot on location in that city. Ryan’s lottery connections gets him swept into a money-making scheme masterminded by Ming’s no-good boyfriend. Everything’s Gone Green is polished by a dynamite soundtrack featuring a full slate of Canadian indie bands.

“Johnny To is such a steady practitioner of the Asian gangster genre that the ease with which he tosses off the pitch-perfect Exile serves to disguise the superb craftsmanship and intelligence of its design…an accomplished suspense-action piece that touches on universal themes of brotherhood, exile, love and honor.” — Kirk Honeycutt, Hollywood Reporter. To plays Wo, a gangster making a new life for himself and his family, returning to 1998 Macau in the final days before the island comes under Chinese rule. Everyone is rushing to make quick money and settle old scores, and Wo finds himself hunted by not one but two sets of hit men, intent on rubbing out Wo for his failed hit on a prominent gang boss. But loyalties are shifting as the clock ticks, and you never know who might be covering your back, or aiming a gun at it. Stylish and dark, To’s impeccable choreography makes Exiled a consistently elegant wonder, and he directs a cast of veteran actors with assurance and grace.

Vancouver is the setting for Everything’s Gone Green, about finding earthy love in an Ikea world.

passage from delayed adolescence into adulthood. Hendler plays the neurotic and uptight lawyer Ariel Perelman, who has big shoes to fill as the son of a genial and legendary lawyer (Arturo Goetz). Ariel’s life, the details of which are observed in affectionate detail, changes when he marries a lovely Pilates instructor and has a child of his own. The three generations of Perelmans confound each other with how much they need to learn about being a family. The subtle interactions between fathers and sons are so perfectly acted and written that the smallest exchange is fascinating. “This is a comedy made for people who think, who like smart talk and who, like the Perelmans, know the score.” — Mike Wilmington, Chicago Tribune. Winner, Audience Award, 2006 Mar del Plata Film Festival.

Fay Grim is a ripe and rollicking thriller, with Parker Posey as the title character racing against crooks and the CIA to collect a set of notebooks written by her husband, Henry Fool. Yes, it’s a ten-year-later sequel of sorts to Hal Hartley’s best film (also playing at this year’s Festival). These notebooks, the “Confessions,” contain