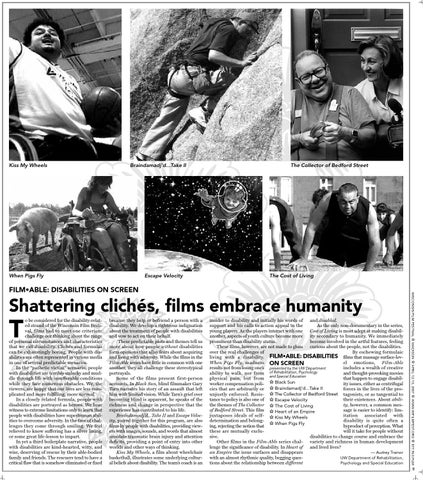 The Collector of Bedford Street

The Cost of Living

o be considered for the disability-related strand of the Wisconsin Film Festival, films had to meet one criterion: challenge our thinking about the range of personal circumstances and characteristics that we call disability. Clichés and formulas can be exhaustingly boring. People with disabilities are often represented in various media in one of several predictable scenarios. In the “pathetic victim” scenario, people with disabilities are terribly unlucky and muddle through life with insufferable conditions while they face numerous obstacles. We, the viewers, are happy that our lives are less complicated and more fulfilling, more normal. In a closely related formula, people with disabilities are portrayed as heroes. We bear witness to extreme limitations only to learn that people with disabilities have superhuman abilities to overcome adversity. In the face of challenges they come through smiling. We feel relieved to know suffering has a silver lining, or some great life-lesson to impart. In yet a third boilerplate narrative, people with disabilities are kind-hearted, witty, and wise, deserving of rescue by their able-bodied family and friends. The rescuers tend to have a critical flaw that is somehow eliminated or fixed

because they help or befriend a person with a disability. We develop a righteous indignation about the treatment of people with disabilities and vow to act on their behalf. These predictable plots and themes tell us more about how people without disabilities form opinions that allay fears about acquiring and living with adversity. While the films in the Film·Able series have little in common with one another, they all challenge these stereotypical portrayals. Some of the films present first-person accounts. In Black Sun, blind filmmaker Gary Tarn narrates his story of an assault that left him with limited vision. While Tarn’s grief over becoming blind is apparent, he speaks of the richness and change in perspective that the experience has contributed to his life. Braindamadj’d…Take II and Escape Velocity, paired together for this program, are also films by people with disabilities, providing viewers with images, sounds, and words that almost simulate traumatic brain injury and attention deficits, providing a point of entry into other worlds and other ways of thinking. Kiss My Wheels, a film about wheelchair basketball, illustrates some underlying cultural beliefs about disability. The team’s coach is an

insider to disability and initially his words of and disabled. support and his calls to action appeal to the As the only non-documentary in the series, young players. As the players interact with one Cost of Living is most adept at making disabilanother, aspects of youth culture become more ity secondary to humanity. We immediately prominent than disability status. become involved in the artful features, feeling These films, however, are not made to gloss curious about the people, not the disabilities. over the real challenges of By eschewing formulaic living with a disability. FILM•ABLE: DISABILITIES films that massage surface-levWhen Pigs Fly, madness ON SCREEN el emotions, Film·Able results not from losing one’s presented by the UW Department includes a wealth of creative ability to walk, nor from of Rehabilitation, Psychology and thought-provoking movies physical pain, but from and Special Education that happen to engage disabilworker compensation poli- ✿ Black Sun ity issues, either as centrifugal cies that are arbitrarily or ✿ Braindamadj’d...Take II forces in the lives of the prounjustly enforced. Resis- ✿ The Collector of Bedford Street tagonists, or as tangential to tance to policy is also one of ✿ Escape Velocity their existences. About abilithe themes of The Collector ✿ The Cost of Living ty, however, a common mesof Bedford Street. This film ✿ Heart of an Empire sage is easier to identify: limjuxtaposes ideals of self- ✿ Kiss My Wheels itation associated with determination and belongdisability is quite often a ✿ When Pigs Fly ing, rejecting the notion that byproduct of perception. What these are mutually excluwill it take for people without sive. disabilities to change course and embrace the Other films in the Film·Able series chal- variety and richness in human development lenge the significance of disability. In Heart of and lived lives? an Empire the issue surfaces and disappears — Audrey Trainor with an almost rhythmic quality, begging quesUW Department of Rehabilitation, tions about the relationship between different Psychology and Special Education