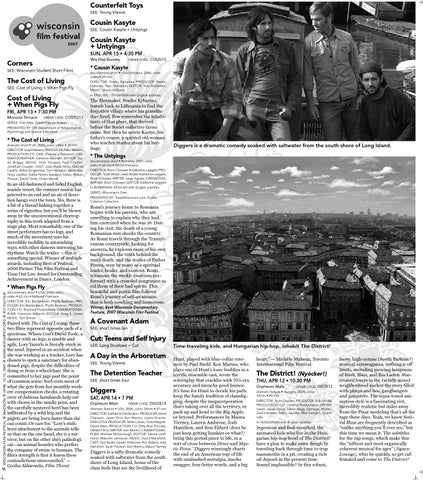 In an old-fashioned and faded English seaside resort, the summer season has petered to an end and an air of desertion hangs over the town. Yes, there is a bit of a thread linking together a series of vignettes, but you’ll be blown away by the unconventional choreography in this work adapted from a stage play. Most remarkably, one of the street performers has no legs, and much of the movement uses his incredible mobility in astonishing ways, with other dancers mirroring his rhythms. Watch the trailer — this is something special. Winner of multiple awards, including Best of Festival, 2006 Picture This Film Festival and Time Out Live Award for Outstanding Achievement in Dance, London. WISCONSIN FILM FESTIVAL ✿ MADISON ✿ APRIL 12-15, 2007 ✿ WWW.WIFILMFEST.ORG ✿ 877.963.FILM

Paired with The Cost of Living, these two films represent opposite ends of a spectrum. Where Cost’s David Toole, a dancer with no legs, is nimble and agile, Lory Yazurlo is literally stuck in the mud. Injured in an accident when she was working as a trucker, Lory has chosen to open a sanctuary for abandoned pigs, despite the difficulties of doing so from a wheelchair. She is committed to her pigs past the point of common sense: feed costs most of what she gets from her monthly workers’ compensation checks, a rotating crew of dubious farmhands help out with chores in the mucky pens, and the carefully neutered herd has been infiltrated by a wild hog and the piglets are being born faster than she can count. Or care for. “Lory’s stubborn attachment to the animals tells us that on the one hand, she is a survivor, but on the other she’s pathological—an animal hoarder who prefers the company of swine to humans. The film’s strength is that it leaves these contradictions unreconciled.” — Cecilia Aldarondo, Film Threat

The filmmaker, Stashu Kybartas, travels back to Lithuania to find the forgotten village where his grandfather lived. Few remember the inhabitants of that place, that thrived before the Soviet collective farms came. But then he meets Kastye, his father’s cousin, a spirited old woman who teaches Stashu about his heritage.

Diggers is a dramatic comedy soaked with saltwater from the south shore of Long Island.

Romi’s journey home to Romania begins with his parents, who are unwilling to explain why they had him exorcized when he was 18. During his visit, the death of a young Romanian nun shocks the country. As Romi travels through the Transylvanian countryside, looking for answers, he explores more of his own background, the truth behind the nun’s death, and the stories of Father Pintea, seen by many as a spiritual leader, healer, and exorcist. Romi witnesses the weekly exorcism performed with a crowded congration to rid them of their bad spirits. This beautiful and poetic film follows Romi’s journey of self-awareness that is both touching and humorous. Winner, Best Wisconsin Documentary Feature, 2007 Wisconsin Film Festival

A Day in the Arboretum SEE: Young Visions

Diggers is a nifty dramatic comedy soaked with saltwater from the south shore of Long Island, home of the clam beds that are the livelihood of

Hunt, played with blue-collar cuteness by Paul Rudd. Ken Marino, who plays one of Hunt’s loser buddies in a terrific ensemble cast, wrote the screenplay that crackles with 70’s-era accuracy and raunchy good humor. It’s time for Hunt to decide his path: keep the family tradition of clamdigging, despite the megacorporation that’s taking over all the territory, or pack up and head to the Big Apple, or beyond. Performances by Maura Tierney, Lauren Ambrose, Josh Hamilton, and Ron Eldard (does he just keep getting hunkier or what?) bring this period piece to life, in a sort of cross between Diner and Mystic Pizza. “Diggers winningly charts the end of an American way of life with unabashed nostalgia, macho swagger, four-letter words, and a big

Ingenious and foul-mouthed, the animated kids who live in the Hungarian hip-hop hood of The District! have a plan to make some dough by traveling back through time to trap mammoths in a pit, creating a rich oil deposit in the present time. Sound implausible? In this robust,

busty, high-octane (South Parkian?) musical extravaganza, nothing is off limits, including piercing lampoons of Bush, Blair, and Bin Laden. Starcrossed lovers in the racially mixed neighborhood anchor the story filled with pimps and hos, gangbangers and gangsters. The sepia-toned animation style is a fascinating riot, incredibly realistic but miles away from the Pixar modeling that’s all the rage these days. Yeah, we know festival films are frequently described as “unlike anything you’ll ever see,” but this time we mean it. The subtitles for the rap songs, which make this the “niftiest and most organically coherent musical for ages” (Jigsaw Lounge), whiz by quickly, so get caffeinated and come to The District!