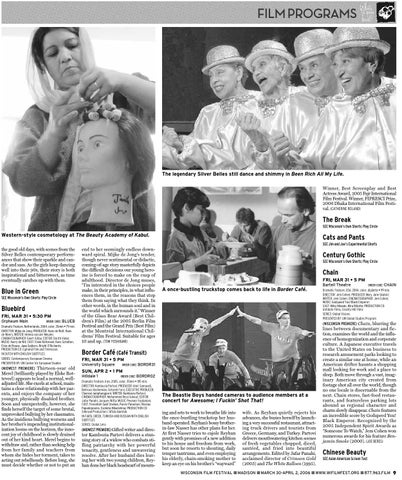 Western-style cosmetology at The Beauty Academy of Kabul.

the good old days, with scenes from the Silver Belles contemporary performances that show their sparkle and candor and sass. As the girls keep dancing well into their 90s, their story is both inspirational and bittersweet, as time eventually catches up with them.

Merel (brilliantly played by Elske Rotteveel) appears to lead a normal, welladjusted life. She excels at school, maintains a close relationship with her parents, and enjoys the company of her younger, physically disabled brother. Soon and unexpectedly, however, she finds herself the target of some brutal, unprovoked bullying by her classmates. As the insidious bullying worsens and her brother’s impending institutionalization looms on the horizon, the innocent joy of childhood is slowly drained out of her kind heart. Merel begins to withdraw and, rather than seeking help from her family and teachers from whom she hides her torment, takes to acting out rebelliously. Before long, she must decide whether or not to put an

end to her seemingly endless downward spiral. Mijke de Jong’s tender, though never sentimental or didactic, coming-of-age story masterfully depicts the difficult decisions our young heroine is forced to make on the cusp of adulthood. Director de Jong muses, “I’m interested in the choices people make, in their principles, in what influences them, in the reasons that stop them from saying what they think. In other words, in the human soul and in the world which surrounds it.” Winner of the Glass Bear Award (Best Children’s Film) at the 2005 Berlin Film Festival and the Grand Prix (Best Film) at the Montréal International Childrens’ Film Festival. Suitable for ages 10 and up. (TOM YOSHIKAMI)

A once-bustling truckstop comes back to life in Border Café.

tor Kambozia Partovi delivers a stunning story of a widow who combats stifling patriarchy with her powerful tenacity, gentleness and unwavering resolve. After her husband dies leaving her with two young children, Reyhan dons her black headscarf of mourn-

The Beastie Boys handed cameras to audience members at a concert for Awesome; I Fuckin’ Shot That! ing and sets to work to breathe life into the once-bustling truckstop her husband operated. Reyhan’s bossy brotherin-law Nasser has other plans for her. At first Nasser tries to cajole Reyhan gently with promises of a new addition to his house and freedom from work, but soon he resorts to shouting, daily temper tantrums, and even employing his elderly, chain-smoking mother to keep an eye on his brother’s “wayward”

(WISCONSIN PREMIERE) Chain, blurring the lines between documentary and fiction, examines the world and the influence of homogenization and corporate culture. A Japanese executive travels to the United States on business to research amusement parks looking to create a similar one at home, while an American drifter haunts a shopping mall looking for work and a place to sleep. Both move through a vast, imaginary American city created from footage shot all over the world, though no one locale is discernable from the next. Chain stores, fast-food restaurants, and featureless parking lots abound as regional character and charm slowly disappear. Chain features an incredible score by Godspeed You! Black Emperor. Recognized by the 2005 Independent Spirit Awards as “Someone To Watch,” Jem Cohen won numerous awards for his feature Benjamin Smoke (2000). (JOE BERES)