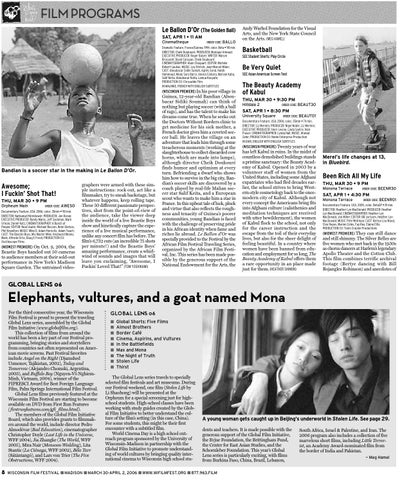 (WISCONSIN PREMIERE) In his poor village in

Bandian is a soccer star in the making in Le Ballon D’Or.

(MIDWEST PREMIERE) On Oct. 9, 2004, the Beastie Boys handed out 50 cameras to audience members at their sold-out performance in New York’s Madison Square Garden. The untrained video-

graphers were armed with these simple instructions: rock out, act like a filmmaker, try to sneak backstage, but whatever happens, keep rolling tape. These 50 different passionate perspectives, shot from the point-of-view of the audience, take the viewer deep inside the world of a live Beastie Boys show and kinetically capture the experience of a live musical performance, unlike any concert film has before. The film’s 6,732 cuts (an incredible 75 shots per minute!) and the Beastie Boys’ amazing performance, create a whirlwind of sounds and images that will leave you exclaiming, “Awesome, I Fuckin’ Loved That!” (TOM YOSHIKAMI)

Guinea, 12-year-old Bandian (Aboubacar Sidiki Soumah) can think of nothing but playing soccer (with a ball of rags), and has the talent to make his dreams come true. When he seeks out the Doctors Without Borders clinic to get medicine for his sick mother, a French doctor gives him a coveted soccer ball. He leaves the village on an adventure that leads him through some treacherous moments (working at the slaughterhouse to collect discarded cow horns, which are made into lamps), although director Cheik Doukouré finds humor and optimism at every turn. Befriending a dwarf who shows him how to survive in the big city, Bandian’s soccer skills are discovered by a coach played by real-life Malian soccer star Salif Keita, and a European scout who wants to make him a star in France. In this upbeat tale of luck, pluck and virtue that also reflects the roughness and tenacity of Guinea’s poorer communities, young Bandian is faced with the challenge of preserving pride in his African identity when fame and riches lie abroad. Le Ballon d’Or was specially provided to the Festival by the African Film Festival Traveling Series, organized by the African Film Festival, Inc. This series has been made possible by the generous support of the National Endowment for the Arts, the

Andy Warhol Foundation for the Visual Arts, and the New York State Council on the Arts. (MEG HAMEL)

(WISCONSIN PREMIERE) Twenty years of war has left Kabul in ruins. In the midst of countless demolished buildings stands a pristine sanctuary: the Beauty Academy of Kabul. Opened in 2003 by a volunteer staff of women from the United States, including some Afghani expatriates who had fled decades earlier, the school strives to bring Western-style cosmetology back to the oncemodern city of Kabul. Although not every concept the Americans bring fits into Afghani culture (calisthenics and meditation techniques are received with utter bewilderment), the women of Kabul flock to the school, not only for the career instruction and the escape from the toil of their everyday lives, but also for the sheer delight of feeling beautiful. In a country where women have been banned from education and employment for so long, The Beauty Academy of Kabul offers them a rare opportunity in an place made just for them. (HEATHER SHIMON)

Merel’s life changes at 13, in Bluebird.

(MIDWEST PREMIERE) They can still dance and still shimmy. The Silver Belles are five women who met back in the 1930s as chorus dancers at Harlem’s legendary Apollo Theater and the Cotton Club. This film combines terrific archival footage (Bertye dancing with Bill Bojangles Robinson) and anecdotes of

The Global Lens series travels to specially selected film festivals and art museums. During our Festival weekend, one film (Stolen Life by Li Shaohong) will be presented at the Orpheum for a special screening just for highschool students. High-school classes have been working with study guides created by the Global Film Initiative to better understand the culture of the film’s setting (in this case, China). For some students, this might be their first encounter with a subtitled film. World Cinema Day is a high school outreach program sponsored by the University of Wisconsin-Madison in partnership with the Global Film Initiative to promote understanding of world cultures by bringing quality international cinema to Wisconsin high school stu-

A young woman gets caught up in Beijing‘s underworld in Stolen Life. See page 29. dents and teachers. It is made possible with the generous support of the Global Film Initiative, the Evjue Foundation, the Brittingham Fund, the Center for East Asian Studies, and the Schoenleber Foundation. This year’s Global Lens series is particularly exciting, with films from Burkina Faso, China, Brazil, Lebanon,