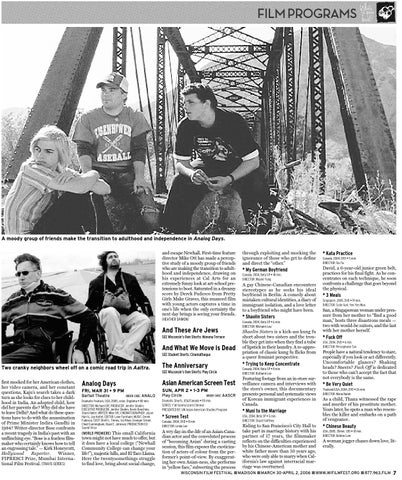 A moody group of friends make the transition to adulthood and independence in Analog Days. and escape Newhall. First-time feature director Mike Ott has made a perceptive study of a moody group of friends who are making the transition to adulthood and independence, drawing on his experiences at Cal Arts for an extremely funny look at art-school pretensions to boot. Saturated in a dreamy score by Derek Fudesco from Pretty Girls Make Graves, this nuanced film with young actors captures a time in one’s life when the only certainty the next day brings is seeing your friends. (HEATHER SHIMON)

And These Are Jews SEE Wisconsin’s Own Shorts: Monona Terrace

And What We Move is Dead SEE Student Shorts: Cinematheque

Two cranky neighbors wheel off on a comic road trip in Aaltra.

first mocked for her American clothes, her video camera, and her constant questions, Kaju’s search takes a dark turn as she looks for clues to her childhood in India. An adopted child, how did her parents die? Why did she have to leave Delhi? And what do these questions have to do with the assassination of Prime Minister Indira Gandhi in 1984? Writer-director Bose confronts a recent tragedy in India’s past with an unflinching eye. “Bose is a fearless filmmaker who certainly knows how to tell an engrossing tale.” — Kirk Honeycutt, Hollywood Reporter. Winner, FIPRESCI Prize, Mumbai International Film Festival. (TRAVIS GERDES)

town might not have much to offer, but it does have a local college (“Newhall Community College can change your life!”), majestic hills, and El Taco Llama. Here the twentysomethings struggle to find love, bring about social change,

A wry day-in-the-life of an Asian-Canadian actor and the convoluted process of “becoming Asian” during a casting session, this film exposes the exoticization of actors of colour from the performer’s point-of-view. By exaggerating her own Asian-ness, she performs in “yellow face,” subverting the process

through exploiting and mocking the ignorance of those who get to define and direct the “other.”

David, a 6-year-old junior green belt, practices for his final fight. As he concentrates on each technique, he soon confronts a challenge that goes beyond the physical.

A gay Chinese-Canadian encounters stereotypes as he seeks his ideal boyfriend in Berlin. A comedy about mistaken cultural identities, a diary of immigrant isolation, and a love letter to a boyfriend who might have been.

Shaolin Sisters is a kick-ass kung fu short about two sisters and the trouble they get into when they find a tube of lipstick in their laundry. A re-appropriation of classic kung fu flicks from a queer feminist perspective.

Featuring footage from an in-store surveillance camera and interviews with the store’s owner, this documentary presents personal and systematic views of Korean immigrant experiences in Canada.

Riding to San Francisco’s City Hall to take part in marriage history with his partner of 17 years, the filmmaker reflects on the difficulties experienced by his Chinese-American mother and white father more than 50 years ago, who were only able to marry when California’s law against interracial marriage was overturned.

San, a Singaporean woman under pressure from her mother to “find a good man,” hosts three disastrous meals — two with would-be suitors, and the last with her mother herself.

People have a natural tendency to stare, especially if you look or act differently. Uncomfortable glances? Shaking heads? Sneers? Fuck Off is dedicated to those who can’t accept the fact that not everybody is the same.

As a child, Thana witnessed the rape and murder of his prostitute mother. Years later, he spots a man who resembles the killer and embarks on a path of vengeance.