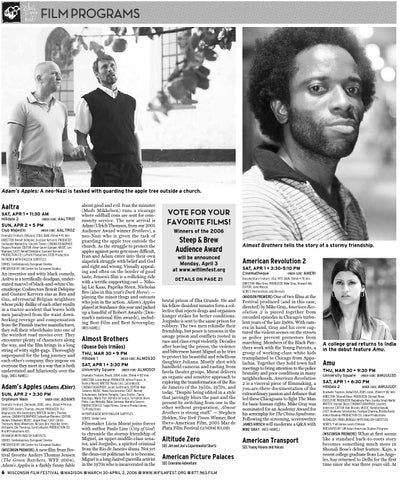 Adam’s Apples: A neo-Nazi is tasked with guarding the apple tree outside a church.

An inventive and witty black comedy, Aaltra is a terrifically deadpan, understated marvel of black-and-white CinemaScope. Codirectors Benoît Delépine and Gustave Kervern star as Ben and Gus, adversarial Belgian neighbors whose picky dislike of each other results in a tractor accident that leaves both men paralyzed from the waist down. Seeking revenge and compensation from the Finnish tractor manufacturer, they roll their wheelchairs into one of the weirdest road movies ever. They encounter plenty of characters along the way, and the film brings in a long string of witty sight-gags. Thoroughly unprepared for the long journey and each other’s company, they impose on everyone they meet in a way that is both understated and hilariously over the top. (MEG HAMEL)

about good and evil. Ivan the minister (Mads Mikkelsen) runs a vicarage where oddball cons are sent for community service. The new arrival is Adam (Ulrich Thomsen, from our 2005 Audience Award winner Brothers), a neo-Nazi who is given the task of guarding the apple tree outside the church. As the struggle to protect the apples against pests gets more difficult, Ivan and Adam enter into their own slapstick struggle with belief and God and right and wrong. Visually appealing and often on the border of good taste, Jensen’s film is a rollicking ride with a terrific supporting cast — Nikolaj Lie Kaas, Paprika Steen, Nicholas Bro (also in this year’s Dark Horse) — playing the minor thugs and outcasts who join in the action. Adam’s Apples played at Sundance this year and picked up a handful of Robert Awards (Denmark’s national film awards), including Best Film and Best Screenplay. (MEG HAMEL)

Filmmaker Lúcia Murat joins forces with author Paulo Lins (City of God) to chronicle the stormy friendship of Miguel, an upper-middle-class senator, and Jorginho, a spirited criminal from the Rio de Janeiro slums. Not yet the clean-cut politician he is to become, Miguel is a long-haired guerrilla activist in the 1970s who is incarcerated in the

VOTE FOR YOUR FAVORITE FILMS! Winners of the 2006

Almost Brothers tells the story of a stormy friendship.

brutal prison of Ilha Grande. He and his fellow dissident inmates form a collective that rejects drugs and organizes hunger strikes for better conditions. Jorginho is sent to the same prison for robbery. The two men rekindle their friendship, but peace is tenuous in the savage prison and conflicts rooted in race and class erupt violently. Decades after leaving the prison, the violence and bitterness haunt Miguel as he tries to protect his beautiful and rebellious daughter Juliana. Mostly shot with handheld cameras and casting from favela theater groups, Murat delivers an organic and sensitive approach to exploring the transformation of the Rio de Janeiro of the 1950s, 1970s, and today. “Despite being edited in a style that jarringly blurs the past and the present by switching from one to the other without preparation, Almost Brothers is strong stuff.” — Stephen Holden, New York Times. Winner, Best Ibero-American Film, 2005 Mar de Plata Film Festival (CATHERINE REILAND)

(MADISON PREMIERE) One of two films at the Festival produced (and in this case, directed) by Mike Gray, American Revolution 2 is pieced together from recorded episodes in Chicago’s turbulent years of the late 1960s. With camera in hand, Gray and his crew captured the violent scenes on the streets as police prevent protestors from marching. Members of the Black Panthers work with the Young Patriots, a group of working-class white kids transplanted to Chicago from Appalachia. Together they hold town hall meetings to bring attention to the police brutality and poor conditions in many neighborhoods. American Revolution 2 is a visceral piece of filmmaking, a you-are-there documentation of the extraordinary passion and defiance that led these Chicagoans to fight The Man for basic human rights. Mike Gray was nominated for an Academy Award for his screenplay for The China Syndrome. Following the screening, screenwriter JAMES HIRSCH will moderate a Q&amp;A with MIKE GRAY. (MEG HAMEL)

A college grad returns to India in the debut feature Amu.

(WISCONSIN PREMIERE) What at first seems like a standard back-to-roots story becomes something much more in Shonali Bose’s debut feature. Kaju, a recent college graduate from Los Angeles, has returned to Delhi for the first time since she was three years old. At