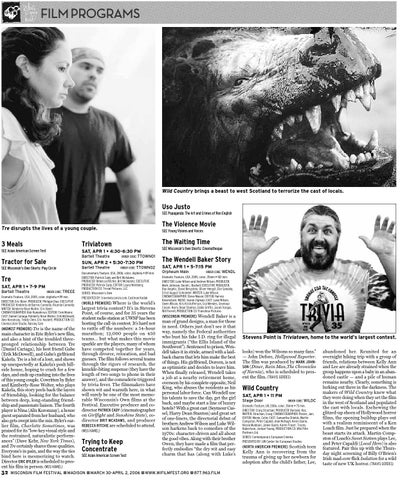 Wild Country brings a beast to west Scotland to terrorize the cast of locals.

Tre disrupts the lives of a young couple.

(MIDWEST PREMIERE) Tre is the name of the

main character in Eric Byler’s new film, and also a hint of the troubled threepronged relationship between Tre (Daniel Cariaga), his best friend Gabe (Erik McDowell), and Gabe’s girlfriend Kakela. Tre is a bit of a lout, and shows up unexpectedly at Kakela’s posh hillside house, hoping to crash for a few days, and ends up crashing into the lives of this young couple. Cowritten by Byler and Kimberly-Rose Wolter, who plays Kakela, this story peels back the layers of friendship, looking for the balance between deep, long-standing friendship and passionate liaison. The fourth player is Nina (Alix Koromzay), a house guest separated from her husband, who also gets swept into the mix. Byler’s earlier film, Charlotte Sometimes, was praised for its “low-key visual style and the restrained, naturalistic performances” (Dave Kehr, New York Times), and Tre certainly shares those qualities. Everyone’s in pain, and the way the ties bind here is mesmerizing to watch. Director ERIC BYLER is scheduled to present his film in person. (MEG HAMEL)

(WORLD PREMIERE) Where is the world’s largest trivia contest? It’s in Stevens Point, of course, and for 35 years the student radio station at UWSP has been hosting the call-in contest. It’s hard not to rattle off the numbers: a 54-hour marathon; 12,000 people on 450 teams… but what makes this movie sparkle are the players, many of whom have competed together for years, through divorce, relocation, and bad guesses. The film follows several teams through the rigors of research, the knuckle-biting suspense (they have the length of two songs to phone in their answer), and the comraderie triggered by trivia fever. The filmmakers have shown wit and warmth here, in what will surely be one of the most memorable Wisconsin’s Own films at the Festival. Executive producer and codirector PATRICK CADY (cinematographer on Girlfight and Sunshine State), codirector BRIT MCADAMS, and producer REBECCA RITCHIE are scheduled to attend. (MEG HAMEL)

(WISCONSIN PREMIERE) Wendell Baker is a man of grand designs, a man for those in need. Others just don’t see it that way, namely the Federal authorities who bust his fake I.D. ring for illegal immigrants (“the Ellis Island of the Southwest”). Sentenced to prison, Wendell takes it in stride, armed with a laidback charm that lets him make the best of things. His girlfriend, Doreen, is not as optimistic and decides to leave him. When finally released, Wendell takes a job at a nearby retirement home, overseen by his complete opposite, Neil King, who abuses the residents as his personal labor force. Can Wendell use his talents to save the day, get the girl back, and maybe start a line of luxury hotels? With a great cast (Seymour Cassel, Harry Dean Stanton) and great set of one-liners, the directorial debut of brothers Andrew Wilson and Luke Wilson harkens back to comedies of the 1970s: character-driven and all about the good vibes. Along with their brother Owen, they have made a film that perfectly embodies “the dry wit and easy charm that has (along with Luke’s

Stevens Point is Triviatown, home to the world’s largest contest. looks) won the Wilsons so many fans.” — John Defore, Hollywood Reporter. The film was produced by MARK JOHNSON (Diner, Rain Man,The Chronicles of Narnia), who is scheduled to present the film. (TRAVIS GERDES)

(NORTH AMERICAN PREMIERE) Scottish teen Kelly Ann is recovering from the trauma of giving up her newborn for adoption after the child’s father, Lee,

abandoned her. Reunited for an overnight hiking trip with a group of friends, relations between Kelly Ann and Lee are already strained when the group happens upon a baby in an abandoned castle — and a pile of human remains nearby. Clearly, something is lurking out there in the darkness. The makers of Wild Country knew what they were doing when they set the film in the west of Scotland and populated the cast with locals. Eschewing the glitzed-up sheen of Hollywood horror films, the opening buildup plays out with a realism reminiscent of a Ken Loach film. Just be prepared when the beast starts its attack. Martin Compston of Loach’s Sweet Sixteen plays Lee, and Peter Capaldi (Local Hero) is also featured. Pair this up with the Thursday night screening of Billy O’Brien’s Irish mad-cow flick Isolation for a wild taste of new UK horror. (TRAVIS GERDES)