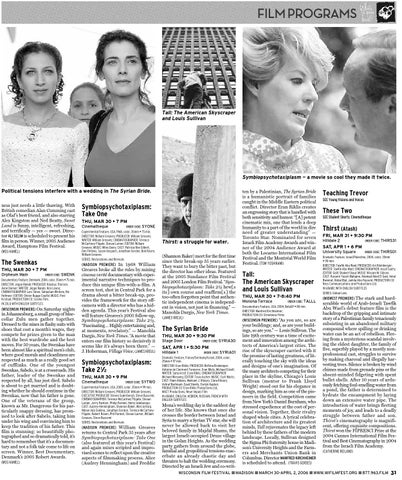 in Johannesburg, a small group of bluecollar Zulu men gather together. Dressed to the nines in flashy suits with shoes that cost a month’s wages, they compete for prizes given to the man with the best wardrobe and the best moves. For 50 years, the Swenkas have been almost like a spiritual men’s club, where good morals and cleanliness are respected as much as a really good set of cufflinks. One of the youngest Swenkas, Sabelo, is at a crossroads. His father, leader of the Swenkas and respected by all, has just died. Sabelo is about to get married and is doubting whether he should continue in the Swenkas, now that his father is gone. One of the veterans of the group, known as Mr. Dangerous for his particularly snappy dressing, has promised to look after Sabelo, taking him under his wing and convincing him to keep the tradition of his father. This film is stunning: so beautifully photographed and so dramatically told, it’s hard to remember that it’s a documentary and not a folk tale come to life on screen. Winner, Best Documentary, Denmark’s 2005 Robert Awards. (MEG HAMEL)

Greaves broke all the rules by mixing cinema verité documentary with experimental narrative techniques to produce this unique film-with-a-film. A screen test, shot in Central Park for a drama about a bitter break-up, provides the framework for the story offcamera with a director who has a hidden agenda. This year’s Festival also will feature Greaves’s 2005 follow-up, Symbiopsychotaxiplasm: Take 2½. “Fascinating… Highly entertaining and, at moments, revelatory.” — Manohla Dargis, New York Times. “A movie that enters our film history so decisively it seems like it’s always been there.” — J. Hoberman, Village Voice. (JAMES KREUL)

(MADISON PREMIERE) William Greaves returns to Central Park 35 years after Symbiopsychotaxiplasm: Take One (also featured at this year’s Festival) and again mixes scripted and improvised scenes to reflect upon the creative aspects of filmmaking process. Alice (Audrey Henningham) and Freddie

Thirst: a struggle for water. (Shannon Baker) meet for the first time since their break-up 35 years earlier. They want to bury the bitter past, but the director has other ideas. Featured at the 2005 Sundance Film Festival and 2005 London Film Festival. “Symbiopsychotaxiplasm: Take 2½ hew[s its] own course and reaffirm[s] the too-often forgotten point that authentic independent cinema is independent in vision, not just in financing.” — Manohla Dargis, New York Times. (JAMES KREUL)

(WISCONSIN PREMIERE) “As you are, so are

ten by a Palestinian, The Syrian Bride is a humanistic portrait of families caught in the Middle Eastern political conflict. Director Eran Riklis creates an engrossing story that is handled with both sensitivity and humor. “[A] potent cinematic mix, one that lends a deep humanity to a part of the world in dire need of greater understanding” — Toronto Star. Nominated for seven Israeli Film Academy Awards and winner of the 2004 Audience Award at both the Locarno International Film Festival and the Montréal World Film Festival. (TOM YOSHIKAMI)

Mona’s wedding day is the saddest day of her life. She knows that once she crosses the border between Israel and Syria to marry a Syrian TV star, she will never be allowed back to visit her beloved family in Majdal Shams, the largest Israeli-occupied Druze village in the Golan Heights. As the wedding party gathers from around the globe, familial and geopolitical tensions exacerbate an already chaotic day and threaten to halt the wedding ceremony. Directed by an Israeli Jew and co-writ-

your buildings; and, as are your buildings, so are you.” — Louis Sullivan. The late 19th century was a time of excitement and innovation among the architects of America’s largest cities. The rise of the skyscraper carried with it the promise of lasting greatness, of literally touching the sky with the ideas and designs of one’s imagination. Of the many architects competing for their place in the skyline, Chicago’s Louis Sullivan (mentor to Frank Lloyd Wright) stood out for his elegance in design, marking him as one of the pioneers in the field. Competition came from New York’s Daniel Burnham, who stressed expedience at the cost of personal vision. Together, their rivalry shaped whole cities. A lyrical celebration of architecture and its greatest minds, Tall rejuvenates the legacy left behind by these fathers of the modern landscape. Locally, Sullivan designed the Sigma Phi fraternity house in Madison’s University Heights and the Farmers and Merchants Union Bank in Columbus. Director MANFRED KIRCHHEIMER is scheduled to attend. (TRAVIS GERDES)

(MIDWEST PREMIERE) The stark and hard-

scrabble world of Arab-Israeli Tawfik Abu Wael’s debut feature film is the backdrop of the gripping and intimate story of a Palestinian family tenaciously subsisting in an abandoned military compound where spilling or drinking water can be an act of rebellion. Fleeing from a mysterious scandal involving the eldest daughter, the family of five, superbly played by a mostly nonprofessional cast, struggles to survive by making charcoal and illegally harvesting trees. Silence is broken by wind chimes made from grenade pins or the absent-minded fidgeting with spent bullet shells. After 10 years of arduously fetching foul-smelling water from a pond, the father is determined to hydrate the encampment by laying down an extensive water pipe. The introduction of water brings fleeting moments of joy, and leads to a deadly struggle between father and son. Thirst’s cinematography is magnificent, offering exquisite compositions. Thirst won the FIPRESCI Prize at the 2004 Cannes International Film Festival and Best Cinematography in 2004 from the Israeli Film Academy. (CATHERINE REILAND)