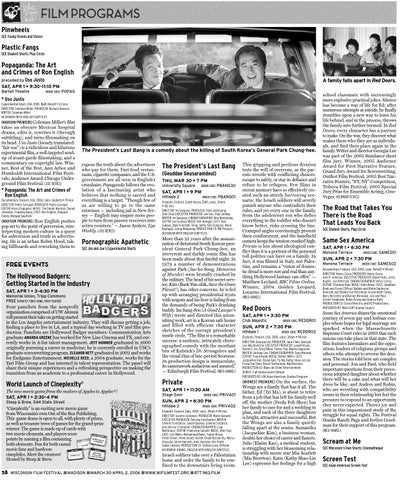 Popaganda: The Art and Crimes of Ron English preceded by Uso Justo

pop art to the point of perversion, reinterpreting modern culture in a quest for subversion and truth in advertising. He is an urban Robin Hood, taking billboards and reworking them to

The President’s Last Bang is a comedy about the killing of South Korea’s General Park Chung-hee. expose the truth about the advertisers who pay for them. Fast food restaurants, cigarette companies, and the U.S. government are all seen in English’s crosshairs. Popaganda follows the evolution of a fascinating artist who believes that nothing is sacred and everything is a target. “Though few of us are willing to go to the same extremes — including jail in New Jersey — English may inspire more people to turn from passive receivers into active resisters.” — Jason Anders, Eye Weekly. (JOE BERES)

Four panelists from the nonprofit organization comprised of UW Alumni will present their take on getting started in the Los Angeles entertainment industry. They will discuss getting a job, finding a place to live in LA, and a typical day working in TV and film production. Panelists are Hollywood Badger members: Communication Arts graduate AMANDA GREENE has worked for New Line Cinema and FX, and currently works in A-list talent management. JEFF HAMMER graduated in 2000 originally pursuing a career in medicine; he is currently enrolled in USC’s graduate screenwriting program. ELEANOR NETT graduated in 2002 and works for Endgame Entertainment. MICHELLE REED, a 2004 graduate, works for the Yari Film Group and has interned in talent representation. The panel will share their unique experiences and a refreshing perspective on making the transition from an academic to a professional career in Hollywood.

More than 25 years after the assassination of dictatorial South Korean president General Park Chung-hee, an irreverent and darkly comic film has been made about that fateful night. In 1979 a number of demonstrations against Park (Jae-ho Song, Memories of Murder) were brutally crushed by the military. The head of his secret service, Kim (Baek Yun-shik, Save the Green Planet!), has other concerns: he is fed up with arranging presidential trysts with sexpots and his liver is failing from the demands of being Park’s drinking buddy. Im Sang-Soo (A Good Lawyer’s Wife) wrote and directed this astonishing work, set in a Korean safe house and filled with efficient character sketches of the corrupt president’s inside circle. “The film is a remarkable success: a sardonic, intricately choreographed comedy with the mordant bite of Kubrick’s Dr. Strangelove and the visual élan of late-period Scorsese: its production design is immaculate, its camerawork audacious and assured.” — Edinburgh Film Festival. (MEG HAMEL)

“Cineplexity” is an exciting new movie game from Wisconsin’s own Out of the Box Publishing. This game demo is open to all, with plenty of prizes, as well as treasure trove of games for the grand-prize winner. The game is made up of cards with two movie elements, and players score points by naming a film containing both elements. Fun for both casual movie fans and hardcore cinephiles. Meet the creators! Hosted by Steep &amp; Brew.

Israeli soldiers take over a Palestinian home and order the family to be confined to the downstairs living room.

This gripping and perilous division tests the will of everyone, as the parents wrestle with conflicting choices: escape to safety, or stay in defiance and refuse to be refugees. Few films in recent memory have so effectively created such an utterly harrowing scenario: the Israeli soldiers will severly punish anyone who contradicts their rules, and yet every one in the family, from the adolescent son who defies everything to the toddler who doesn’t know better, risks crossing the line. Cramped angles convincingly present their confinement, and the handheld camera keeps the tension cranked high. Private is less about ideological conflict than it is a portrait of the personal toll politics can have on a family. In fact, it was filmed in Italy, not Palestine, and remains a “vision of domestic dread is more raw and real than anything Hollywood fantasy can offer.” — Matthew Leyland, BBC Films Online. Winner, 2004 Golden Leopard, Locarno International Film Festival. (MEG HAMEL)

(MIDWEST PREMIERE) On the surface, the Wongs are a family that has it all. The father, Ed (Tzi Ma), is about to retire from a job that has left his family well off, the mother (Freda Foh Shen) has her family to care for and a wedding to plan, and each of the three daughters is bright, attractive and successful. But the Wongs are also a family quietly falling apart at the seams. Samantha (Jacqueline Kim), a business woman, doubts her choice of career and fiancée. Julie (Elaine Kao), a medical student, is struggling with her blossoming relationship with movie star Mia Scarlett (Mia Riverton). Katie (Kathy Shao-Lin Lee) expresses her feelings for a high

school classmate with increasingly more explosive practical jokes. Silence has become a way of life for Ed; after numerous attempts at suicide, he finally stumbles upon a new way to leave his life behind, and in the process, throws the family into further turmoil. In Red Doors, every character has a journey to make. On the way, they discover what makes them who they are as individuals, and find their place again in the family. Writer and director Georgia Lee was part of the 2005 Sundance short film jury. Winner, 2005 Audience Award for First Narrative Feature, Grand Jury Award for Screenwriting, Outfest Film Festival; 2005 Best Narrative Feature, “NY, NY” Competition, Tribeca Film Festival; 2005 Special Jury Prize for Ensemble Acting, CineVegas. (KERMAN ECKES)

The Road that Takes You There is the Road That Leads You Back SEE Student Shorts: Play Circle

Same Sex America shares the emotional journey of seven gay and lesbian couples whose hopes for legal marriage are sparked when the Massachusetts Supreme Court rules in 2003 that such unions can take place in that state. The film features lawmakers and the opposition, leaders of religious groups and others who attempt to reverse the decision. The stories told here are complex and personal: Jon and Paul, who field important questions from their precocious adopted daughter about whether there will be a cake and what will her dress be like; and Audrey and Robin, who are wrestling with compatibility issues in their relationship but feel the pressure to respond to an opportunity they never expected. There’s joy and pain in this impassioned study of the struggle for equal rights. The Festival thanks Randy Page and Jerilyn Goodman for their support of this program. (MEG HAMEL)

Scream at Me SEE Wisconsin’s Own Shorts: Cinematheque