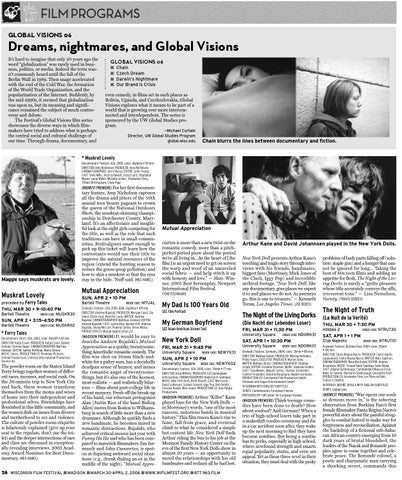 Dreams, nightmares, and Global Visions It’s hard to imagine that only 20 years ago the word “globalization” was rarely used in business, politics, or media. Indeed the term wasn’t commonly heard until the fall of the Berlin Wall in 1989. Then usage accelerated with the end of the Cold War, the formation of the World Trade Organization, and the popularization of the Internet. Suddenly, by the mid-1990s, it seemed that globalization was upon us, but its meaning and significance remained the subject of much controversy and debate. The Festival’s Global Visions film series showcases the diverse ways in which filmmakers have tried to address what is perhaps the central social and cultural challenge of our time. Through drama, documentary, and

even comedy, in films set in such places as Bolivia, Uganda, and Czechoslovakia, Global Visions explores what it means to be part of a world that is growing ever more interconnected and interdependent. The series is sponsored by the UW Global Studies program. —Michael Curtain Director, UW Global Studies Program global.wisc.edu

Chain blurrs the lines between documentary and fiction.

(MIDWEST PREMIERE) For her first documen-

tary feature, Amy Nicholson captures all the drama and jitters of the 50th annual teen beauty pageant to crown the queen of the National Outdoors Show, the muskrat-skinning championship in Dorchester County, Maryland. It’s an affectionate and insightful look at the eight girls competing for the title, as well as the role that such traditions can have in small communities. Festivalgoers smart enough to pick up this ticket will learn how the contestants would use their title to improve the natural resources of the region (extend the hunting season to reduce the goose-poop pollution) and how to skin a muskrat so that the eyes stay in the hide. ’Nuff said. (MEG HAMEL)

The powder room on the Staten Island Ferry brings together women of different races, incomes, and social rank. On the 30-minute trip to New York City and back, these women transform themselves from the moms and wives of home into their independent and professional selves. Friendships have flourished in this little community, and the women dish on issues from divorce and motherhood to sex and violence. The culture of powder-room etiquette is hilariously explained (give up your seat to the regulars, don’t use the toilet) and the deeper intersections of race and class are discussed in exceptionally revealing interviews. 2003 Academy Award Nominee for Best Documentary. (MEG HAMEL)

ciation is more than a new twist on the romantic comedy, more than a pitchperfect period piece about the period we’re all living in...At the heart of [the film] is an urgent need to get on screen the warp and woof of an unraveled social fabric — and help stitch it up with honesty and love.” — Slate. Winner, 2005 Best Screenplay, Newport International Film Festival. (TOM YOSHIKAMI)

(MADISON PREMIERE) It would be easy to

describe Andrew Bujalski’s Mutual Appreciation as a quirky, twentysomething AmerIndie romantic comedy. The film was shot on 16mm black-andwhite for a paltry sum, has a decidedly deadpan sense of humor, and mines the romantic angst of twentysomethings, but it’s also one of the keenest, most realistic — and realistically hilarious — films about post-college life in recent memory. Fresh off the break-up of his band, our reluctant protagonist Alan (Justin Rice of the band Bishop Allen) moves from Boston to Williamsburg in search of little more than a new drummer. Although he quickly finds a new bandmate, he becomes mired in romantic distractions. Bujalski, who achieved critical success last year with Funny Ha Ha and who has been compared to maverick filmmakers Jim Jarmusch and John Cassavetes, is spoton at depicting awkward social situations (e.g., drunk dialing an ex in the middle of the night). “Mutual Appre-

Arthur Kane and David Johannsen played in the New York Dolls. New York Doll presents Arthur Kane’s touching and tragic story through interviews with his friends, bandmates, biggest fans (Morrissey, Mick Jones of the Clash, Iggy Pop) and incredible archival footage. “New York Doll, like any documentary, goes places we expect it to and places we do not. As journeys go, this is one to treasure.” — Kenneth Turan, Los Angeles Times. (JOE BERES)

The Night of the Living Dorks

problems of body parts falling off (solution: staple gun) and a hunger that cannot be ignored for long… Taking the best of 80s teen films and adding an appetite for flesh, The Night of the Living Dorks is surely a “guilty pleasure whose title accurately conveys the silly, irreverent tone.” — Lisa Nesselson, Variety. (TRAVIS GERDES)

played bass for the New York Dolls — in Morrissey’s words, “one of the most raucous, notorious bands in musical history.” This film traces Kane’s rise to fame, fall from grace, and eventual climb to what he considered a simple but content life. New York Doll finds Arthur riding the bus to his job at the Mormon Family History Center on the eve of the first New York Dolls show in almost 20 years — an opportunity to mend the relationships with his old bandmates and reclaim all he had lost.

dies have been done to death? How about undead? And German? When a trio of high-school losers take part in a makeshift voodoo ceremony and die in a car accident soon after, they wake up the next morning to find they have become zombies. But being a zombie has its perks, especially in high school, where newfound strength and smarts equal popularity, status, and even sex appeal. Yet as these three revel in their situation, they must deal with the pesky

so demons move in,” is the sobering observation from Burkina Faso’s first female filmmaker Fanta Régina Nacro’s powerful story about the painful struggles to combat hatred to make way for forgiveness and reconciliation. Against the backdrop of a fictional sub-Saharan African country emerging from 10 dark years of brutal bloodshed, the leaders of the Nayak and Bonandé peoples agree to come together and celebrate peace. The Bonandé colonel, a poetic and charismatic man carrying a shocking secret, commands this