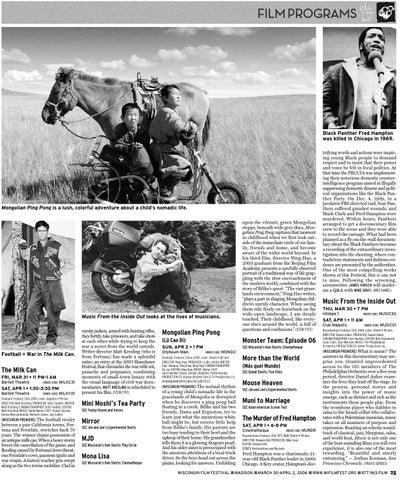 Black Panther Fred Hampton was killed in Chicago in 1969.

Mongolian Ping Pong is a lush, colorful adventure about a child’s nomadic life.

Music From the Inside Out looks at the lives of musicians.

Football = War in The Milk Can.

between a pair California towns, Fortuna and Ferndale, stretches back 70 years. The winner claims possession of an antique milk can. When a heavy storm forces the cancellation of the game, and flooding caused by Fortuna’s levee threatens Ferndale’s cows, passions ignite and war erupts. A history teacher gets swept along as the two towns mobilize. Clad in

varsity jackets, armed with hunting rifles, they fortify, take prisoners, and take shots at each other while trying to keep the war a secret from the world outside. Writer-director Matt Kresling (who is from Fortuna) has made a splendid satire, an entry at the 2005 Slamdance Festival, that chronicles the war with wit, panache and poignancy, combining moments of small-town lunacy with the visual language of civil war documentaries. MATT KRESLING is scheduled to present his film. (STEW FYFE)

upon the vibrant, green Mongolian steppe, beneath wide grey skies, Mongolian Ping Pong captures that moment in childhood when we first look outside of the immediate circle of our family, friends and home, and become aware of the wider world beyond. In his third film, director Ning Hao, a 2003 graduate from the Beijing Film Academy, presents a carefully observed portrait of a traditional way of life grappling with the slow encroachment of the modern world, combined with the story of Bilike’s quest. “The vast grasslands environment,” Ning Hao writes, “plays a part in shaping Mongolian children’s unruly character. When seeing them ride freely on horseback on the wide-open landscape, I am deeply touched. Their childhood, like everyone else’s around the world, is full of questions and confusions.” (STEW FYFE)

of a young child’s nomadic life in the grasslands of Mongolia is disrupted when he discovers a ping pong ball floating in a creek. Bilike and his two friends, Dawa and Erguotou, try to learn just what the mysterious white ball might be, but receive little help from Bilike’s family. His parents are too busy tending to their herd and the upkeep of their home. His grandmother tells them it is a glowing dragon’s pearl. And his older sister is preoccupied with the amorous attentions of a local truck driver. So the boys head out across the plains, looking for answers. Unfolding

trifying words and actions were inspiring young Black people to demand respect and to insist that their power and voice be felt in local politics. At that time the FBI/CIA was implementing their notorious domestic counterintelligence program aimed at illegally suppressing domestic dissent and political organizations like the Black Panther Party. On Dec. 4, 1969, in a predawn FBI-directed raid, four Panthers suffered gunshot wounds, and Mark Clark and Fred Hampton were murdered. Within hours, Panthers arranged to get a documentary film crew to the scene and they were able to record the carnage. What had been planned as a fly-on-the-wall documentary about the Black Panthers becomes a recording of the extraordinary investigation into the shooting, where contradictory statements and dubious evidence are presented by the authorities. One of the most compelling works shown at this Festival, this is one not to miss. Following the screening, screenwriter JAMES HIRSCH will moderate a Q&amp;A with MIKE GRAY. (MEG HAMEL)

(WISCONSIN PREMIERE) What is music? The

answers in this documentary may surprise you. Granted unprecedented access to the 105 members of The Philadelphia Orchestra over a five-year period, director Daniel Anker examines the lives they lead off the stage. In the process, personal stories and insights into the power of music emerge, each as distinct and rich as the instruments these people play. From the trombone player who dabbles in salsa to the Israeli cellist who collaborates with a Palestinian musician, music takes on all manners of purpose and expression. Boasting an eclectic soundtrack of classical, jazz, bluegrass, salsa, and world beat, Music is not only one of the best-sounding films you will ever experience, it is also one of the most rewarding. “Beautiful and utterly entrancing.” — Joshua Kosman, San Francisco Chronicle. (TRAVIS GERDES)