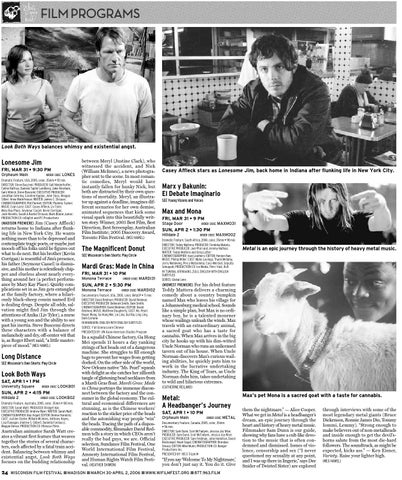 returns home to Indiana after flunking life in New York City. He wants nothing more than to be depressed and contemplate tragic poets, or maybe just mooch off his folks until he figures out what to do next. But his brother (Kevin Corrigan) is resentful of Jim’s presence, his father (Seymour Cassel) is dismissive, and his mother is relentlessly chipper and clueless about nearly everything around her (a perfect performance by Mary Kay Place). Quirky complications set in as Jim gets entangled at the family factory, where a hilariously black-sheep cousin named Evil is dealing drugs. Despite all odds, salvation might find Jim through the attentions of Anika (Liv Tyler), a nurse with a young son and the ability to see past his inertia. Steve Buscemi directs these characters with a balance of melancholy and dry, off-center wit that is, as Roger Ebert said, “a little masterpiece of mood.” (MEG HAMEL)

Australian animator Sarah Watt creates a vibrant first feature that weaves together the stories of several characters, each affected by a fatal train accident. Balancing between whimsy and existential angst, Look Both Ways focuses on the budding relationship

between Meryl (Justine Clark), who witnessed the accident, and Nick (William McInnes), a news photographer sent to the scene. In most romantic comedies, Meryl would have instantly fallen for hunky Nick, but both are distracted by their own questions of mortality. Meryl, an illustrator up against a deadline, imagines different scenarios for her own demise, animated sequences that kick some visual spark into this beautifully written story. Winner, 2005 Best Film, Best Direction, Best Screenplay, Australian Film Institute; 2005 Discovery Award, Toronto Film Festival. (MEG HAMEL)

(MIDWEST PREMIERE) For his debut feature

Teddy Mattera delivers a charming comedy about a country bumpkin named Max who leaves his village for a Johannesburg medical school. Sounds like a simple plan, but Max is no ordinary boy, he is a talented mourner whose wailings unleash the winds. Max travels with an extraordinary animal, a sacred goat who has a taste for cannabis. When Max arrives in the big city he hooks up with his dim-witted Uncle Norman who runs an unlicensed tavern out of his house. When Uncle Norman discovers Max’s curious wailing abilities, he quickly puts him to work in the lucrative undertaking industry. The King of Tears, as Uncle Norman dubs him, takes undertaking to wild and hilarious extremes.

In a squalid Chinese factory, Ga Hong Mei spends 11 hours a day yanking strings of hot beads out of a dangerous machine. She struggles to fill enough bags to prevent her wages from getting docked. On the other side of the world, New Orleans native “Ms. Pearl” squeals with delight as she catches her zillionth tangle of glistening bead necklaces from a Mardi Gras float. Mardi Gras: Made in China portrays the immense disconnect between the factory and the consumer in the global economy. The cultural and economical differences are stunning, as is the Chinese workers’ reaction to the sticker price of the beads and the astonishing way people “win” the beads. Tracing the path of a disposable commodity, filmmaker David Redmon tells a story in which CEOs aren’t really the bad guys, we are. Official selection, Sundance Film Festival, One World International Film Festival, Amnesty International Film Festival, and Human Rights Watch Film Festival. (HEATHER SHIMON)

Metal is an epic journey through the history of heavy metal music.

“If you say ‘Welcome To My Nightmare,’ you don’t just say it. You do it. Give

Max’s pet Mona is a sacred goat with a taste for cannabis. them the nightmare.” — Alice Cooper. What we get in Metal is a headbanger’s dream, an epic journey through the heart and history of heavy metal music. Filmmaker Sam Dunn is our guide, showing why fans have a cult-like devotion to the music that is often condemned and dismissed. Issues of violence, censorship and sex (“I never questioned my sexuality at any point, and I was up there in lingerie,” says Dee Snider of Twisted Sister) are explored

through interviews with some of the most legendary metal giants (Bruce Dickenson, Ronnie James Dio, Tommy Iommi, Lemmy). “Strong enough to make believers out of non-metalheads and inside enough to get the devil’shorns salute from the most die-hard followers. The soundtrack, as might be expected, kicks ass.” — Ken Eisner, Variety. Raise your lighter high. (MEG HAMEL)