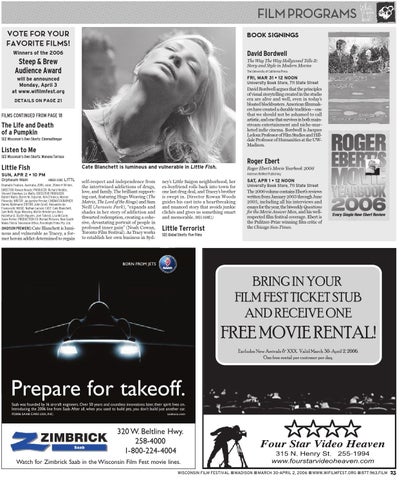 The Way The Way Hollywood Tells It: Story and Style in Modern Movies The University of California Press

will be announced Monday, April 3 at www.wifilmfest.org

David Bordwell argues that the principles of visual storytelling created in the studio era are alive and well, even in today’s bloated blockbusters. American filmmakers have created a durable tradition—one that we should not be ashamed to call artistic, and one that survives in both mainstream entertainment and niche-marketed indie cinema. Bordwell is Jacques Ledoux Professor of Film Studies and Hilldale Professor of Humanities at the UWMadison.

The Life and Death of a Pumpkin SEE Wisconsin’s Own Shorts: Cinematheque

Listen to Me SEE Wisconsin’s Own Shorts: Monona Terrace

Cate Blanchett is luminous and vulnerable in Little Fish.

self-respect and independence from the intertwined addictions of drugs, love, and family. The brilliant supporting cast, featuring Hugo Weaving (The Matrix, The Lord of the Rings) and Sam Neill (Jurassic Park), “expands and shades in her story of addiction and thwarted redemption, creating a cohesive, devastating portrait of people in profound inner pain” (Noah Cowan, Toronto Film Festival). As Tracy works to establish her own business in Syd-

ney’s Little Saigon neighborhood, her ex-boyfriend rolls back into town for one last drug deal, and Tracey’s brother is swept in. Director Rowan Woods guides his cast into a heartbreaking and nuanced story that avoids junkie clichés and gives us something smart and memorable. (MEG HAMEL)

The 2006 volume contains Ebert’s reviews written from January 2003 through June 2005, including all his interviews and essays for the year, the biweekly Questions for the Movie Answer Man, and his wellrespected film festival coverage. Ebert is the Pulitzer-Prize winning film critic of the Chicago Sun-Times.

Prepare for takeoff. Saab was founded by 16 aircraft engineers. Over 50 years and countless innovations later, their spirit lives on. Introducing the 2006 line from Saab. After all, when you used to build jets, you don’t build just another car. ©2006 SAAB CARS USA, INC.