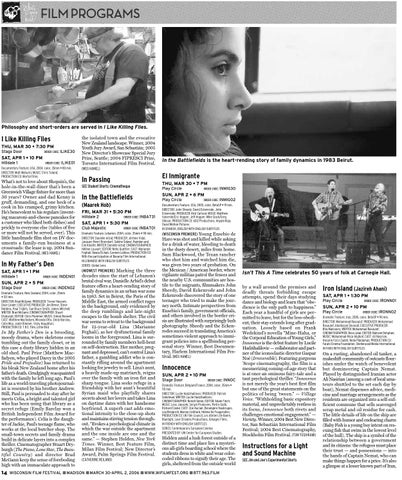 Philosophy and short-orders are served in I Like Killing Flies.

What’s not to love about Shopsin’s, the hole-in-the-wall diner that’s been a Greenwich Village fixture for more than 30 years? Owner and dad Kenny is gruff, demanding, and one heck of a cook in his cramped, grimy kitchen. He’s benevolent to his regulars (inventing macaroni-and-cheese pancakes for a customer who liked both dishes) and prickly to everyone else (tables of five or more will not be served, ever). This little handmade film shot on DV documents a family-run business at a crossroads: the lease is up. 2004 Sundance Film Festival. (MEG HAMEL)

In My Father’s Den is a brooding, moody drama, where skeletons come tumbling out the family closet, or in this case a dusty library hidden in an old shed. Paul Prior (Matthew Macfadyen, who played Darcy in the 2005 Pride and Prejudice) has returned to his bleak New Zealand home after his father’s death. Grudgingly reacquainted with the family he left long ago, Paul’s life as a world-traveling photojournalist is resented by his brother Andrew. Still, Paul is persuaded to stay after he meets Celia, a bright and talented girl who has been using that library as a secret refuge (Emily Barclay won a British Independent Film Award for the performance). Celia is the daughter of Jackie, Paul’s teenage flame, who works at the local butcher shop. The small-town secrets and family drama build in delicate layers into a complex thriller. Cinematographer Stuart Dryburgh (The Piano, Lone Star, The Beautiful Country) and director Brad McGann keep the sense of foreboding high with an immaculate approach to

In the Battlefields is the heart-rending story of family dynamics in 1983 Beirut.

(MIDWEST PREMIERE) Marking the three decades since the start of Lebanon’s brutal cival war, Danielle Arbid’s debut feature offers a heart-rending story of family dynamics in an urban war zone in 1983. Set in Beirut, the Paris of the Middle East, the armed conflict rages in the background, only evidenced by the deep rumblings and late-night escapes to the bomb shelter. The civil war seems to retreat to the background for 12-year-old Lina (Marianne Feghali), as her dysfunctional family looms in the foreground. Lina is surrounded by family members hell-bent on self-destruction. Her mother, pregnant and depressed, can’t control Lina’s father, a gambling addict who is constantly rifling around the apartment looking for jewelry to sell. Lina’s aunt, a heavily made-up matriarch, reigns over the family with an iron fist and sharp tongue. Lina seeks refuge in a friendship with her aunt’s beautiful Syrian maid who playfully shares secrets about her lovers and takes Lina on daytime dates with her handsome boyfriend. A superb cast adds emotional intensity to the close-up shots and maintains stirring tension throughout. “Evokes a psychological climate in which the war outside the apartment and the one inside are one and the same.” — Stephen Holden, New York Times. Winner, Best Feature Film, Milan Film Festival; New Director’s Award, Palm Springs Film Festival. (CATHERINE REILAND)

Haro was shot and killed while asking for a drink of water, bleeding to death in the dusty desert, miles from home. Sam Blackwood, the Texan rancher who shot him and watched him die, was given two years of probation. On the Mexican / American border, where vigilante militias patrol the fences and the nearby U.S. communities are hostile to the migrants, filmmakers John Sheedy, David Eckenrode and John Eckenrode discovered the story of one teenager who tried to make the journey north. Intimate perspectives from Eusebio’s family, government officials, and others involved in the border crisis are illustrated with surprisingly lush photography. Sheedy and the Eckenrodes succeed in translating America’s sometimes violent approach to immigrant policies into a spellbinding personal story. Winner, Best Documentary, Harlem International Film Festival. (MEG HAMEL)

Hidden amid a lush forest outside of a distinct time and place lies a mysterious all-girls boarding school where the students dress in white and wear colorcoded ribbons to signify their age. The girls, sheltered from the outside world

Isn’t This A Time celebrates 50 years of folk at Carnegie Hall. by a wall around the premises and deadly threats forbidding escape attempts, spend their days studying dance and biology and learn that “obedience is the only path to happiness.” Each year a handful of girls are permitted to leave, but for the less-obedient, their stay extends long after graduation. Loosely based on Frank Wedekind’s novella “Mine-Haha, or the Corporal Education of Young Girls,” Innocence is the debut feature by Lucile Hadzihalilovic — collaborator and partner of the iconoclastic director Gaspar Noé (Irreversible). Featuring gorgeous ’Scope cinematography, the film is a mesmerizing coming-of-age story that is at once an ominous fairy-tale and a taut psychological thriller. “Innocence is not merely the year’s best first film but one of the great statements on the politics of being ’tween.” — Village Voice. “Withholding basic expository material, and unpredictably restless in its focus, Innocence both rivets and challenges emotional engagement.” — Variety. Winner, 2004 Best New Director, San Sebastián International Film Festival; 2004 Best Cinematography, Stockholm Film Festival. (TOM YOSHIKAMI)

On a rusting, abandoned oil tanker, a makeshift community of outcasts flourishes under the watch of benevolent but domineering Captain Nemat. Played by distinguished Iranian actor Ali Nasirian (among a cast of local amateurs shuttled to the set each day by boat), Nemat dispenses advice, medicine and marriage arrangements as the residents are organized into a self-sufficient commune that sells scavenged scrap metal and oil residue for cash. The little details of life on the ship are filled with humor and endearing charm (Baby Fish is a young boy intent on rescuing fish that swim in the lowest level of the hull). The ship is a symbol of the relationship between a government and its citizens: the refugees must place their trust — and possessions — into the hands of Captain Nemat, who can make things happen for a price. It’s also a glimpse at a lesser known part of Iran,