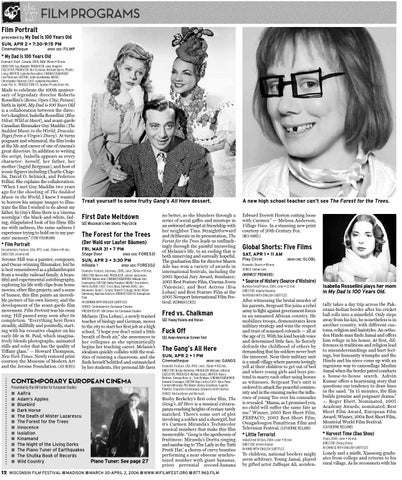 Made to celebrate the 100th anniversary of legendary director Roberto Rossellini’s (Rome, Open City; Paisan) birth in 1906, My Dad is 100 Years Old is a collaboration between the director’s daughter, Isabella Rossellini (Blue Velvet, Wild at Heart), and avant-garde Canadian filmmaker Guy Maddin (The Saddest Music in the World; Dracula: Pages from a Virgin’s Diary). At turns poignant and whimsical, the film looks at the life and career of one of cinema’s great directors. In addition to writing the script, Isabella appears as every character: herself, her father, her mother (Ingrid Bergman), and host of iconic figures including Charlie Chaplin, David O. Selznick, and Federico Fellini. She explains the collaboration: “When I met Guy Maddin two years ago for the shooting of The Saddest Music in the World, I knew I wanted to borrow his unique images to illustrate the film I wished to do about my father. In Guy’s films there is a ‘cinema nostalgia’: the black-and-white, fading, dilapidated look of his films fills me with sadness, the same sadness I experience trying to hold on to my parents’ memory.” (TOM YOSHIKAMI)

Treat yourself to some fruity Gang’s All Here dessert.

The Forest for the Trees (Der Wald vor Lauter Bäumen)

Jerome Hill was a painter, composer, and Oscar-winning filmmaker, but he is best remembered as a philanthropist from a weathy railroad family. A beautiful and experimental autobiography, exploring his life with clips from home movies, other film projects, and a sense of humor, this film paints an incredible picture of his own history, and the development of the avant-garde film movement. Film Portrait was his swan song: Hill passed away soon after its completion. “Everything here flows steadily, skillfully and pointedly, starting with his evocative chapter on his early life in St. Paul, which imaginatively blends photographs, animated stills and color that has the quality of Tiffany glass.” — Howard Thompson, New York Times. Newly restored print courtesy the Museum of Modern Art and the Jerome Foundation. (JOE BERES)

Melanie (Eva Lobau), a newly trained teacher of biology and German, moves to the city to start her first job at a high school. “I hope you don’t mind a little breath of fresh air,” she announces to her collegues as she optimistically begins her teaching career. Melanie’s idealism quickly collides with the realities of running a classroom, and she finds herself belittled and outmatched by her students. Her personal life fares

no better, as she blunders through a series of social gaffes and missteps in an awkward attempt at friendship with her neighbor Tina. Straightforward and deliberate in its presentation, The Forest for the Trees leads us unflinchingly through the painful unraveling of Melanie’s life, to an ending that is both unnerving and surreally hopeful. The graduation film for director Maren Ade has won a variety of awards in international festivals, including the 2005 Special Jury Award, Sundance; 2005 Best Feature Film, Cinema Joven (Valencia); and Best Actress (Eva Lobau) and Best Feature Film at the 2005 Newport International Film Festival. (KERMAN ECKES)

Busby Berkeley’s first color film, The Gang’s All Here is a musical extravaganza reaching heights of ecstasy rarely matched. There’s some sort of plot involving a soldier and a showgirl, but it’s Carmen Miranda’s Technicolor musical numbers that make this film memorable. “Gang is the apotheosis of fruitiness: Miranda’s Dorita singing and samba-ing to ‘The Lady in the Tutti Frutti Hat,’ a chorus of curvy beauties performing a near obscene synchronized number with giant bananas, prissy perennial second-banana

Isabella Rossellini plays her mom in My Dad Is 100 Years Old.

After witnessing the brutal murder of his parents, Sergeant Toe joins a rebel army to fight against government forces in an unnamed African country. He mobilizes troops, demonstrates keen military strategy and wins the respect and trust of seasoned colonels — all at the age of 11. With his loud boyish voice and determined little face, he fiercely defends the childhood of others by demanding that his soldiers never hurt the innocent. Near their military unit is a small village where parents lovingly yell at their children to get out of bed and where young girls and boys pretend to marry each other using horses as witnesses. Sergeant Toe’s unit is ordered to attack the peaceful community and in the ensuing melee the influence of young Toe over his comrades is revealed. “Mama, as I promised you, no child will suffer the same fate as me.” Winner, 2003 Best Short Film, FESPACO; 2003 Best Short Film, Ouagadougou Panafrican Film and Television Festival. (CATHERINE REILAND)

tally takes a day trip across the Pakistani-Indian border after his cricket ball rolls into a minefield. Only steps away from his kin, he nonetheless is in another country, with different customs, religion and hairstyles. An orthodox Hindu man finds Jamal and offers him refuge in his house. At first, differences in traditions and religion lead to misunderstandings and hurt feelings, but humanity triumphs and the Hindu and his niece come up with an ingenious way to camouflage Muslim Jamal when the border patrol conducts a house-to-house search. Ashvin Kumar offers a heartening story that questions our tendency to draw lines in the sand. “In 15 minutes, the film builds genuine and poignant drama.” — Roger Ebert. Nominated, 2005 Academy Awards; nominated, Best Short Film Award, European Film Award; Winner, 2004 Best Short Film, Montréal World Film Festival. (CATHERINE REILAND)

Lonely and a misfit, Xiaosong graduates from college and returns to his rural village. As he reconnects with his