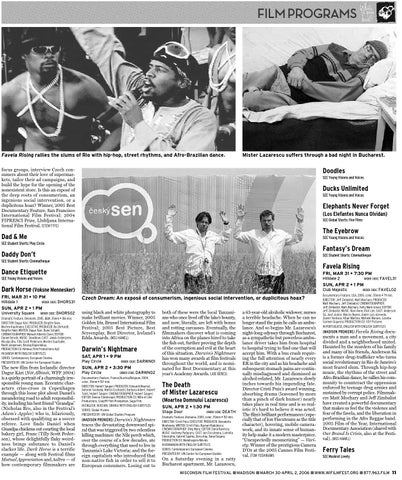 Mister Lazarescu suffers through a bad night in Bucharest.

focus groups, interview Czech consumers about their love of supermarkets, tailor their ad campaigns, and build the hype for the opening of the nonexistent store. Is this an exposé of the deep roots of consumerism, an ingenious social intervention, or a duplicitous hoax? Winner, 2005 Best Documentary Feature, San Francisco International Film Festival; 2004 FIPRESCI Prize, Llubljana International Film Festival. (STEW FYFE)

The new film from Icelandic director Dagur Kári (Nói Albinói, WFF 2004) is a quirky portrait of a charmingly irresponsible young man. Eccentric characters criss-cross in Copenhagen through this loose plot about Daniel’s meandering road to adult responsibility, including his best friend “Grandpa” (Nicholas Bro, also in the Festival’s Adam’s Apples) who is, hilariously, obsessed with qualifying as a soccer referee. Love finds Daniel when Grandpa chickens out courting the local bakery girl, Franc (Tilly Scott Pedersen), whose delightfully flaky weirdness brings substance to Daniel’s slacker life. Dark Horse is a terrific example — along with Festival films Mutual Appreciation and Aaltra — of how contemporary filmmakers are

traces the devastating downward spiral that was triggered by two relentless killing machines: the Nile perch which, over the course of a few decades, ate through everything that used to live in Tanzania’s Lake Victoria; and the foreign capitalists who introduced that non-native fish in order to sell it to European consumers. Losing out to

both of these were the local Tanzanians who once lived off the lake’s bounty, and now, literally, are left with bones and rotting carcasses. Eventually, the filmmakers discover what is coming into Africa on the planes hired to take the fish out, further proving the depth of the corruption and evil at the heart of this situation. Darwin’s Nightmare has won many awards at film festivals throughout the world, and is nominated for Best Documentary at this year’s Academy Awards. (JOE BERES)

On a Saturday evening in a ratty Bucharest apartment, Mr. Lazarescu,

a 63-year-old alcoholic widower, nurses a terrible headache. When he can no longer stand the pain he calls an ambulance. And so begins Mr. Lazarescu’s night-long odyssey through Bucharest, as a sympathetic but powerless ambulance driver takes him from hospital to hospital trying to find one that will accept him. With a bus crash requiring the full attention of nearly every ER in the city and as his headache and subsequent stomach pains are continually misdiagnosed and dismissed as alcohol-related, Mr. Lazarescu slowly inches towards his impending fate. Director Cristi Puiu’s award winning, absorbing drama (leavened by more than a pinch of dark humor) nearly takes place in real time and is so realistic it’s hard to believe it was acted. The film’s brilliant performances (especially that of Ion Fiscuteanu as the title character), hovering, mobile camerawork, and its innate sense of humanity help make it a modern masterpiece. “Unexpectedly mesmerizing” — Variety. Winner of the prestigious Camera D’Or at the 2005 Cannes Film Festival. (TOM YOSHIKAMI)

ments a man and a movement, a city divided and a neighborhood united. Haunted by the murders of his family and many of his friends, Anderson Sá is a former drug-trafficker who turns social revolutionary in Rio de Janeiro’s most feared slum. Through hip-hop music, the rhythms of the street and Afro-Brazilian dance, he rallies his community to counteract the oppression enforced by teenage drug armies and sustained by corrupt police. Filmmakers Matt Mochary and Jeff Zimbalist have created a powerful documentary that makes us feel the the violence and fear of the favela, and the liberation in performing in the Afro Reggae band. 2005 Film of the Year, International Documentary Association (shared with Our Brand Is Crisis, also at the Festival). (MEG HAMEL)