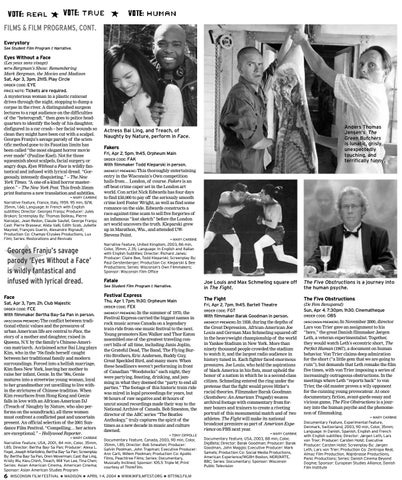 Sat, Apr 3, 3pm, 2h15, Play Circle ORDER CODE: EYE PRICE NOTE: Tickets are required. A mysterious woman in a plastic raincoat drives through the night, stopping to dump a corpse in the river. A distinguished surgeon lectures to a rapt audience on the difficulties of the “heterograft,” then goes to police headquarters to identify the body of his daughter, disfigured in a car crash – her facial wounds so clean they might have been cut with a scalpel. Georges Franju’s savage parody of the scientific method gone to its Faustian limits has been called “the most elegant horror movie ever made” (Pauline Kael). Not for those squeamish about scalpels, facial surgery, or angry dogs, Eyes Without a Face is wildly fantastical and infused with lyrical dread. “Gorgeously, intensely disquieting.” – The New York Times. “A one-of-a-kind horror masterpiece.” – The New York Post. This fresh 35mm print features a new translation and subtitles. — MARY CARBINE

Georges Franju’s savage parody ‘Eyes Without a Face’ is wildly fantastical and infused with lyrical dread. Sat, Apr 3, 7pm, 2h, Club Majestic ORDER CODE: FCE With filmmaker Bertha Bay-Sa Pan in person. (WISCONSIN PREMIERE) The conflict between traditional ethnic values and the pressures of urban American life are central to Face, the story of a mother and daughter, raised in Queens, N.Y. by the family’s Chinese-American matriarch. Acclaimed actor Bai Ling plays Kim, who in the ’70s finds herself caught between her traditional family and modern surroundings. Forced into a hellish marriage, Kim flees New York, leaving her mother to raise her infant, Genie. In the ’90s, Genie matures into a streetwise young woman, loyal to her grandmother yet unwilling to live within the strictures of Chinese tradition. When Kim resurfaces from Hong Kong and Genie falls in love with an African-American DJ (Treach of Naughty by Nature, who also performs on the soundtrack), all three women must confront a conflicted past and uncertain present. An official selection of the 2001 Sundance Film Festival. “Compelling… her actors are exceptional.” – Hollywood Reporter. — MARY CARBINE

Fakers Fri, Apr 2, 5pm, 1h45, Orpheum Main ORDER CODE: FAK With filmmaker Todd Kleparski in person. (MIDWEST PREMIERE) This thoroughly entertaining entry in the Wisconsin’s Own competition hails from… London, of course. Fakers is an off-beat crime caper set in the London art world. Con artist Nick Edwards has four days to find £50,000 to pay off the seriously smooth crime lord Foster Wright, as well as find some romance on the side. Edwards constructs a race-against-time scam to sell five forgeries of an infamous “lost sketch” before the London art world uncovers the truth. Kleparski grew up in Marathon, Wis., and attended UWStevens Point. — MARY CARBINE

Actress Bai Ling, and Treach, of Naughty by Nature, perform in Face.

Thu, Apr 1, 7pm, 1h30, Orpheum Main ORDER CODE: FEX (MIDWEST PREMIERE) In the summer of 1970, the Festival Express carried the biggest names in rock music across Canada on a legendary train ride from one music festival to the next. Young promoters Ken Walker and Thor Eaton assembled one of the greatest traveling concert bills of all time, including Janis Joplin, the Grateful Dead, The Band, The Flying Burrito Brothers, Eric Andersen, Buddy Guy, Great Speckled Bird, and many more. When these headliners weren’t performing in front of Canadian “Woodstocks” each night, they were partying, feasting, drinking, and jamming in what they deemed the “party to end all parties.” The footage of this historic train ride was mired in legal proceedings for years, but 90 hours of raw negative and 40 hours of uncut sound recordings made their way to the National Archive of Canada. Bob Smeaton, the director of the ABC series “The Beatles Anthology,” truly captures the spirit of the times as a new decade in music and culture dawned. — TONY CIPPOLLE

Joe Louis and Max Schmeling square off in The Fight.

The Five Obstructions is a journey into the human psyche.

Fri, Apr 2, 7pm, 1h45, Bartell Theatre ORDER CODE: FGT With filmmaker Barak Goodman in person. (MIDWEST PREMIERE) In 1938, during the depths of the Great Depression, African-American Joe Louis and German Max Schmeling squared off in the heavyweight championship of the world in Yankee Stadium in New York. More than ninety thousand people crowded the stadium to watch it, and the largest radio audience in history tuned in. Each fighter faced enormous pressures. Joe Louis, who held the aspirations of black America in his fists, must uphold the honor of a nation in which he is a second-class citizen. Schmeling entered the ring under the pretense that the fight would prove Hitler’s racial theories. Filmmaker Barak Goodman (Scottsboro: An American Tragedy) weaves archival footage with commentary from former boxers and trainers to create a riveting portrait of this monumental match and of two athletes. The Fight will make its national broadcast premiere as part of American Experience on PBS next year.

Sun, Apr 4, 7:30pm, 1h30, Cinematheque ORDER CODE: OBS (WISCONSIN PREMIERE) In November 2000, director Lars von Trier gave an assignment to his “hero,” the great Danish filmmaker Jørgen Leth, a veteran experimentalist. Together, they would watch Leth’s eccentric short, The Perfect Human (1967), a document on human behavior. Von Trier claims deep admiration for the short (“a little gem that we are going to ruin”), but demands that Leth remake the film five times, with von Trier imposing a series of increasingly outrageous obstructions. In the meetings where Leth “reports back” to von Trier, the old master proves a wily opponent for the cunning young provocateur. At once documentary, fiction, avant-garde essay and vicious game, The Five Obstructions is a journey into the human psyche and the phenomenon of filmmaking. — MARY CARBINE