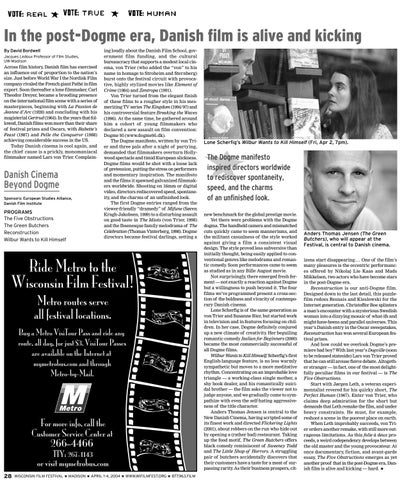 In the post-Dogme era, Danish film is alive and kicking By David Bordwell Jacques Ledoux Professor of Film Studies, UW-Madison

Across film history, Danish film has exercised an influence out of proportion to the nation’s size. Just before World War I the Nordisk Film company rivaled the French giant Pathé in film export. Soon thereafter a lone filmmaker, Carl Theodor Dreyer, became a brooding presence on the international film scene with a series of masterpieces, beginning with La Passion de Jeanne d’Arc (1928) and concluding with his magisterial Gertrud (1964). In the years that followed, Danish films won more than their share of festival prizes and Oscars, with Babette’s Feast (1987) and Pelle the Conqueror (1988) achieving considerable success in the US. Today Danish cinema is cool again, and the chief cause is a prickly, monomaniacal filmmaker named Lars von Trier. Complain-

ing loudly about the Danish Film School, government film funding, and the cultural bureaucracy that supports a modest local cinema, von Trier (who added the “von” to his name in homage to Stroheim and Sternberg) burst onto the festival circuit with provocative, highly stylized movies like Element of Crime (1984) and Zentropa (1991). Von Trier turned from the elegant finish of these films to a rougher style in his mesmerizing TV series The Kingdom (1994/97) and his controversial feature Breaking the Waves (1996). At the same time, he gathered around him a cohort of young filmmakers who declared a new assault on film convention: Dogme 95 (www.dogme95.dk). The Dogme manifesto, written by von Trier and three pals after a night of partying, demanded that filmmakers overturn Hollywood spectacle and timid European slickness. Dogme films would be shot with a loose lack of pretension, putting the stress on performers and momentary inspiration. The manifesto and the films it spawned galvanized filmmakers worldwide. Shooting on 16mm or digital video, directors rediscovered speed, spontaneity, and the charms of an unfinished look. The first Dogme entries ranged from the viewer-friendly “dramedy” of Mifune (Søren Kragh-Jakobsen, 1999) to a disturbing assault on good taste in The Idiots (von Trier, 1998) and the Ibsenesque family melodrama of The Celebration (Thomas Vinterberg, 1998). Dogme directors became festival darlings, setting a

The Dogme manifesto inspired directors worldwide to rediscover spontaneity, speed, and the charms of an unfinished look. new benchmark for the global prestige movie. Yet there were problems with the Dogme dogma. The handheld camera and mismatched cuts quickly came to seem mannerisms, and the militant casualness of the style worked against giving a film a consistent visual design. The style proved less subversive than initially thought, being easily applied to conventional genres like melodrama and romantic comedy. Soon performances came to seem as studied as in any Bille August movie. Not surprisingly, there emerged fresh ferment — not exactly a reaction against Dogme but a willingness to push beyond it. The four films we’ve programmed present a cross-section of the boldness and vivacity of contemporary Danish cinema. Lone Scherfig is of the same generation as von Trier and Susanne Bier, but started work in television and in features focusing on children. In her case, Dogme definitely conjured up a new climate of creativity. Her beguiling romantic comedy Italian for Beginners (2000) became the most commercially successful of all Dogme films. Wilbur Wants to Kill Himself, Scherfig’s first English-language feature, is no less warmly sympathetic but moves to a more meditative rhythm. Concentrating on an improbable love triangle — a working-class single mother, a shy book dealer, and his romantically suicidal brother — the film asks the viewer not to judge anyone, and we gradually come to sympathize with even the self-hating aggressiveness of the title character. Anders Thomas Jensen is central to the New Danish Cinema, having scripted some of its finest work and directed Flickering Lights (2001), about robbers on the run who hide out by opening a (rather bad) restaurant. Taking up the food motif, The Green Butchers offers black comedy reminiscent of Sweeney Todd and The Little Shop of Horrors. A struggling pair of butchers accidentally discovers that their customers have a taste for a meat of surpassing rarity. As their business prospers, cit-

Anders Thomas Jensen (The Green Butchers), who will appear at the Festival, is central to Danish cinema. izens start disappearing…. One of the film’s many pleasures is the eccentric performances offered by Nikolaj Lie Kaas and Mads Mikkelsen, two actors who have become stars in the post-Dogme era. Reconstruction is our anti-Dogme film. Designed down to the last detail, this puzzlefilm redoes Resnais and Kieslowski for the Internet generation. Christoffer Boe splinters a man’s encounter with a mysterious Swedish woman into a dizzying mosaic of what-ifs and might-have-beens and parallel universes. This year’s Danish entry in the Oscar sweepstakes, Reconstruction has won several European festival prizes. And how could we overlook Dogme’s premiere bad boy? With last year’s Dogville (soon to be released stateside) Lars von Trier proved that he can still arouse fierce debate. Altogether stranger — in fact, one of the most delightfully peculiar films in our festival — is The Five Obstructions. Start with Jørgen Leth, a veteran experimentalist revered for his quirky short, The Perfect Human (1967). Enter von Trier, who claims deep admiration for the short but demands that Leth remake the film, and under heavy constraints. He must, for example, reshoot a scene in the poorest place on earth. When Leth improbably succeeds, von Trier orders another remake, with still more outrageous limitations. As this folie à deux proceeds, a weird codependency develops between the old master and the young provocateur. At once documentary, fiction, and avant-garde essay, The Five Obstructions emerges as yet another proof that in the post-Dogme era, Danish film is alive and kicking — hard. ★