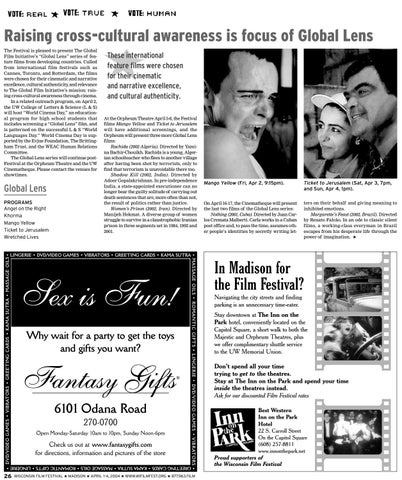 Raising cross-cultural awareness is focus of Global Lens The Festival is pleased to present The Global Film Initiative’s “Global Lens” series of feature films from developing countries. Culled from international film festivals such as Cannes, Toronto, and Rotterdam, the films were chosen for their cinematic and narrative excellence, cultural authenticity, and relevance to The Global Film Initiative’s mission: raising cross-cultural awareness through cinema. In a related outreach program, on April 2, the UW College of Letters & Science (L & S) will host “World Cinema Day,” an educational program for high school students that includes screening a “Global Lens” film, and is patterned on the successful L & S “World Languages Day.” World Cinema Day is supported by the Evjue Foundation, The Brittingham Trust, and the WEAC Human Relations Committee. The Global Lens series will continue postFestival at the Orpheum Theatre and the UW Cinematheque. Please contact the venues for showtimes.

These international feature films were chosen for their cinematic and narrative excellence, and cultural authenticity. At the Orpheum Theatre April 5-8, the Festival films Mango Yellow and Ticket to Jerusalem will have additional screenings, and the Orpheum will present three more Global Lens films: Rachida (2002 Algeria). Directed by Yamina Bachir-Chouikh. Rachida is a young, Algerian schoolteacher who flees to another village after having been shot by terrorists, only to find that terrorism is unavoidable there too. Shadow Kill (2002, India). Directed by Adoor Gopalakrishnan. In pre-independence India, a state-appointed executioner can no longer bear the guilty solitude of carrying out death sentences that are, more often than not, the result of politics rather than justice. Women’s Prison (2002, Iran). Directed by Manijeh Hekmat. A diverse group of women struggle to survive in a claustrophobic Iranian prison in three segments set in 1984, 1992 and 2001.

On April 16-17, the Cinematheque will present the last two films of the Global Lens series: Nothing (2001, Cuba). Directed by Juan Carlos Cremata Malberti. Carla works in a Cuban post office and, to pass the time, assumes other people’s identities by secretly writing let-

ters on their behalf and giving meaning to inhibited emotions. Margarette’s Feast (2002, Brazil). Directed by Renato Falcão. In an ode to classic silent films, a working-class everyman in Brazil escapes from his desperate life through the power of imagination. ★

Sex is Fun! Why wait for a party to get the toys and gifts you want?

Check us out at www.fantasygifts.com for directions, information and pictures of the store

In Madison for the Film Festival? Navigating the city streets and finding parking is an unnecessary time-eater.

Stay downtown at The Inn on the Park hotel, conveniently located on the Capitol Square, a short walk to both the Majestic and Orpheum Theatres, plus we offer complimentary shuttle service to the UW Memorial Union. Don’t spend all your time trying to get to the theatres. Stay at The Inn on the Park and spend your time inside the theatres instead. Ask for our discounted Film Festival rates Best Western Inn on the Park Hotel 22 S. Carroll Street On the Capitol Square (608) 257-8811 www.innonthepark.net Proud supporters of the Wisconsin Film Festival