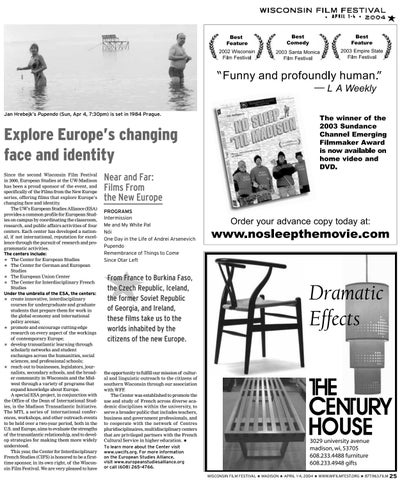 Explore Europe’s changing face and identity Since the second Wisconsin Film Festival in 2000, European Studies at the UW-Madison has been a proud sponsor of the event, and specifically of the Films from the New Europe series, offering films that explore Europe’s changing face and identity. The UW’s European Studies Alliance (ESA) provides a common profile for European Studies on campus by coordinating the classroom, research, and public affairs activities of four centers. Each center has developed a national, if not international, reputation for excellence through the pursuit of research and programmatic activities.

Under the umbrella of the ESA, the centers: ★ create innovative, interdisciplinary courses for undergraduate and graduate students that prepare them for work in the global economy and international policy arenas; ★ promote and encourage cutting-edge research on every aspect of the workings of contemporary Europe; ★ develop transatlantic learning through scholarly networks and student exchanges across the humanities, social sciences, and professional schools; ★ reach out to businesses, legislators, journalists, secondary schools, and the broader community in Wisconsin and the Midwest through a variety of programs that expand knowledge about Europe. A special ESA project, in conjunction with the Office of the Dean of International Studies, is the Madison Transatlantic Initiative. The MTI, a series of international conferences, workshops, and other outreach events to be held over a two-year period, both in the U.S. and Europe, aims to evaluate the strengths of the transatlantic relationship, and to develop strategies for making them more widely understood. This year, the Center for Interdisciplinary French Studies (CIFS) is honored to be a firsttime sponsor, in its own right, of the Wisconsin Film Festival. We are very pleased to have

Near and Far: Films From the New Europe PROGRAMS Intermission Me and My White Pal Nói One Day in the Life of Andrei Arsenevich Pupendo Remembrance of Things to Come Since Otar Left

From France to Burkina Faso, the Czech Republic, Iceland, the former Soviet Republic of Georgia, and Ireland, these films take us to the worlds inhabited by the citizens of the new Europe.

the opportunity to fulfill our mission of cultural and linguistic outreach to the citizens of southern Wisconsin through our association with WFF. The Center was established to promote the use and study of French across diverse academic disciplines within the university, to serve a broader public that includes teachers, business and government professionals, and to cooperate with the network of Centres pluridisciplinaires, multidisciplinary centers that are privileged partners with the French Cultural Service in higher education. ★ To learn more about the Center visit www.uwcifs.org. For more information on the European Studies Alliance, visit www.europeanstudiesalliance.org or call (608) 265-4766. WISCONSIN FILM FESTIVAL ★ MADISON ★ APRIL 1-4, 2004 ★ WWW.WIFILMFEST.ORG ★ 877.963.FILM 25