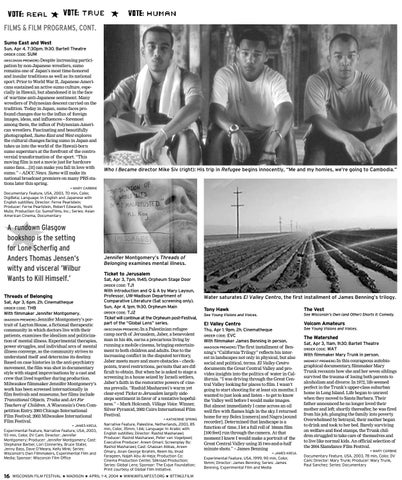 FILMS & FILM PROGRAMS, CONT. Sumo East and West Sun, Apr 4, 7:30pm, 1h30, Bartell Theatre ORDER CODE: SUM (WISCONSIN PREMIERE) Despite increasing participation by non-Japanese wrestlers, sumo remains one of Japan’s most time-honored and insular traditions as well as its national sport. Prior to World War II, Japanese-Americans sustained an active sumo culture, especially in Hawaii, but abandoned it in the face of wartime anti-Japanese sentiment. Many wrestlers of Polynesian descent carried on the tradition. Today in Japan, sumo faces profound changes due to the influx of foreign images, ideas, and influences – foremost among them, the influx of Polynesian-American wrestlers. Fascinating and beautifully photographed, Sumo East and West explores the cultural changes facing sumo in Japan and takes us into the world of the Hawaii-born sumo superstars at the forefront of the controversial transformation of the sport. “This moving film is not a movie just for hardcore sumo fans....[it] can make you fall in love with sumo.” – ADCC News. Sumo will make its national broadcast premiere on many PBS stations later this spring.

Who I Became director Mike Siv (right): His trip in Refugee begins innocently, “Me and my homies, we’re going to Cambodia.”

A rundown Glasgow bookshop is the setting for Lone Scherfig and Anders Thomas Jensen‘s witty and visceral ‘Wilbur Wants to Kill Himself.’ Threads of Belonging Sat, Apr 3, 6pm, 2h, Cinematheque ORDER CODE: THB With filmmaker Jennifer Montgomery. (MADISON PREMIERE) Jennifer Montgomery’s portrait of Layton House, a fictional therapeutic community in which doctors live with their patients, examines the idealism and politicization of mental illness. Experimental therapies, power struggles, and individual arcs of mental illness converge, as the community strives to understand itself and determine its destiny. Based on case histories in the anti-psychiatry movement, the film was shot in documentary style with staged improvisations by a cast and crew that lived together during production. Milwaukee filmmaker Jennifer Montgomery’s work has been screened internationally in film festivals and museums; her films include Transitional Objects, Troika and Art For Teachers of Children. A Wisconsin’s Own Competition Entry. 2003 Chicago International Film Festival; 2003 Milwaukee International Film Festival. — JAMES KREUL

See Wisconsin’s Own (and Other) Shorts II: Comedy.

Thu, Apr 1, 9pm, 2h, Cinematheque ORDER CODE: EVC With filmmaker James Benning in person. (MADISON PREMIERE) The first installment of Benning’s “California Trilogy” reflects his interest in landscapes not only in physical, but also social and political, terms. El Valley Centro documents the Great Central Valley and provides insights into the politics of water in California. “I was driving through the Great Central Valley looking for places to film. I wasn’t going to start shooting for at least six months; I wanted to just look and listen – to get to know the Valley well before I would make images. But almost immediately I came across an oil well fire with flames high in the sky. I returned home for my Bolex [camera] and Nagra [sound recorder]. Determined that landscape is a function of time, I let a full roll of 16mm film [100 feet] run through the camera. At that moment I knew I would make a portrait of the Great Central Valley using 35 two-and-a-half minute shots.” – James Benning

The Watershed Sat, Apr 3, 11am, 1h30, Bartell Theatre ORDER CODE: WAT With filmmaker Mary Trunk in person. (MIDWEST PREMIERE) In this courageous autobiographical documentary, filmmaker Mary Trunk recounts how she and her seven siblings survived the trauma of losing both parents to alcoholism and divorce. In 1972, life seemed perfect in the Trunk’s upper-class suburban home in Long Island. Life began to unravel when they moved to Santa Barbara. Their father announced he no longer loved their mother and left; shortly thereafter, he was fired from his job, plunging the family into poverty. Overwhelmed by betrayal, their mother began to drink and took to her bed. Barely surviving on welfare and food stamps, the Trunk children struggled to take care of themselves and to live like normal kids. An official selection of the 2004 Slamdance Film Festival. — MARY CARBINE