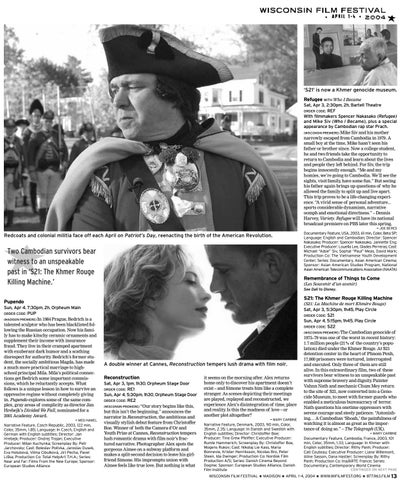 ‘S21’ is now a Khmer genocide museum. Refugee WITH Who I Became Sat, Apr 3, 2:30pm, 2h, Bartell Theatre ORDER CODE: REF With filmmakers Spencer Nakasako (Refugee) and Mike Siv (Who I Became), plus a special appearance by Cambodian rap star Prach. (WISCONSIN PREMIERE) Mike Siv and his mother narrowly escaped from Cambodia in 1979. A small boy at the time, Mike hasn’t seen his father or brother since. Now a college student, he and two friends take the opportunity to return to Cambodia and learn about the lives and people they left behind. For Siv, the trip begins innocently enough. “Me and my homies, we’re going to Cambodia. We’ll see the sights, visit family, have some fun.” But seeing his father again brings up questions of why he allowed the family to split up and live apart. This trip proves to be a life-changing experience. “A vivid sense of personal adventure... sports considerable dynamism, narrative oomph and emotional directness.” – Dennis Harvey, Variety. Refugee will have its national broadcast premiere on PBS later this spring. — JOE BERES

Redcoats and colonial militia face off each April on Patriot’s Day, reenacting the birth of the American Revolution.

Two Cambodian survivors bear witness to an unspeakable past in ‘S21: The Khmer Rouge Killing Machine.’

Pupendo Sun, Apr 4, 7:30pm, 2h, Orpheum Main ORDER CODE: PUP (MADISON PREMIERE) In 1984 Prague, Bedrich is a talented sculptor who has been blacklisted following the Russian occupation. Now his family has to make kitschy ceramic ornaments and supplement their income with insurance fraud. They live in their cramped apartment with exuberant dark humor and a scathing disrespect for authority. Bedrich’s former student, the socially ambitious Magda, has made a much more practical marriage to highschool principal Míla. Míla’s political connections get Bedrich some important commissions, which he reluctantly accepts. What follows is a unique lesson in how to survive an oppressive regime without completely giving in. Pupendo explores some of the same complex, gray areas of complicity as director Jan Hrebejk’s Divided We Fall, nominated for a 2001 Academy Award. — MEG HAMEL

it seems on the morning after. Alex returns home only to discover his apartment doesn’t exist – and Simone treats him like a complete stranger. As scenes depicting their meetings are played, replayed and reconstructed, we experience Alex’s disintegration of time, place and reality. Is this the madness of love – or another plot altogether? — MARY CARBINE

Sat, Apr 3, 5:30pm, 1h45, Play Circle ORDER CODE: S21 Sun, Apr 4, 5:15pm, 1h45, Play Circle ORDER CODE: S22 (WISCONSIN PREMIERE) The Cambodian genocide of 1975–79 was one of the worst in recent history: 1.7 million people (21% of the country’s population) died under the Khmer Rouge. At S21 detention center in the heart of Phnom Penh, 17,000 prisoners were tortured, interrogated and executed. Only three of them are still alive. In this extraordinary film, two of these survivors bear witness to an unspeakable past with supreme bravery and dignity. Painter Vahnn Nath and mechanic Chum Mey return to the site of S21, now converted into a Genocide Museum, to meet with former guards who enabled a meticulous bureaucracy of terror. Nath questions his onetime oppressors with serene courage and steely patience. “Astonishing… A Cambodian ‘Shoah,’ the painfulness of watching it is almost as great as the importance of doing so.” – The Telegraph (UK). — MARY CARBINE