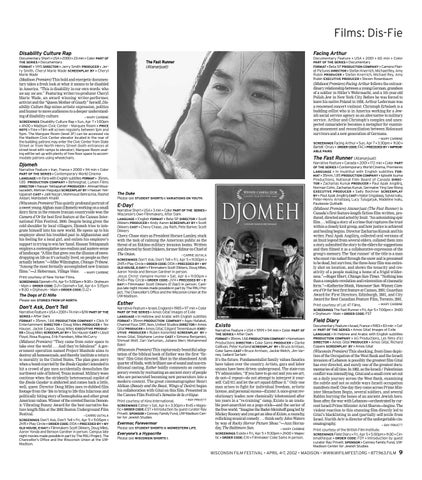 (Madison Premiere) This bold and energetic documentary takes a fresh look at what it means to be disabled in America. “This is disability in our own words: who we say we are.” Featuring writer/co-producer Cheryl Marie Wade, an award winning writer-performer, activist and the “Queen Mother of Gnarly” herself, Disability Culture Rap mixes artistic expression, politics and humor to move audiences to a deeper understanding of disability culture. — MARY CARBINE

(Midwest Premiere) Facing Arthur follows the extraordinary relationship between a young German, grandson of a soldier in Hitler’s Wehrmacht, and a 101-year-old Polish Jew in New York City. Before he was forced to leave his native Poland in 1938, Arthur Lederman was a renowned concert violinist. Christoph Erbsloeh is a budding cellist who is in America working for a Jewish social service agency as an alternative to military service. Arthur and Christoph’s complex and unexpected camaraderie becomes a metaphor for examining atonement and reconciliation between Holocaust survivors and a new generation of Germans.

5pm. The Marquee Room (level 3F) can be accessed via the Madison Civic Center elevator located in the rear of the building; patrons may enter the Civic Center from State Street or from North Henry Street (both entrances at street level with ramps to elevator). Marquee Room seating will be set up with plenty of free floor space to accommodate patrons using wheelchairs.

(Wisconsin Premiere) This quietly profound portrait of a sweet young Afghan man (Djomeh) working on a small dairy farm in the remote Iranian countryside won the Camera d’Or for best first feature at the Cannes International Film Festival, 2000. Despite being given the cold shoulder by local villagers, Djomeh tries to integrate himself into his new world. He opens up to his employer about his troubled past in Afghanistan and his feeling for a local girl, and enlists his employer’s support in trying to win her hand. Hassan Yektapanah employs a contemplative neo-realism and austere sense of landscape. “A film that gives you the illusion of eavesdropping on life as it’s actually lived, on people as they actually behave.”—Mike Wilmington, Chicago Tribune. “Among the most formally accomplished new Iranian films.”—J. Hoberman, Village Voice. — MARY CARBINE Print courtesy of New Yorker Films. SCREENINGS Djomeh > Fri, Apr 5 > 5:00pm > 1h30 > Orpheum - Main > ORDER CODE: DJ1 > Djomeh > Sat, Apr 6 > 5:15pm > 1h30 > Orpheum - Main > ORDER CODE: DJ2 >

The Dogs of El Niño Please see STORIES FROM UP NORTH.

(Midwest Premiere) “They came from outer space to take over the world . . . And they’re fabulous!” A government operation named Project Manhole aims to destroy all homosexuals, and thereby institute a return to morality in the United States. The plan goes awry when a bomb (carried by the Enola Gaydar) intended to hit a crowd of gay men accidentally demolishes the northwest side of Inbred, Texas instead. Military woes continue when the stridently heterosexual copilot of the Enola Gaydar is abducted and comes back a little, well, queer. Director Doug Miles uses re-dubbed film footage from the ‘50s to bring to life this hilarious and politically biting story of homophobia and other great American values. Winner of the coveted Baccus Demonic Vibrating Bunny Award for the best narrative feature length film at the 2002 Boston Underground Film Festival. – CARRIE UUTALA SCREENINGS Don’t Ask, Don’t Tell > Fri, Apr 5 > 11:00pm > 2h15 > Play Circle > ORDER CODE: DOA > PRECEDED BY > MY OLD HOUSE, E-DAY! > Filmmakers Scott Dikkers, Doug Miles,

Aaron Yonda and Benson Gardner in person. Campus late night movies made possible in part by The RWJ Project, The Chancellor’s Office and the Wisconsin Union at the UWMadison.

The Duke Please see STUDENT SHORTS I: VARIATIONS ON YOUTH.

(Midwest Premiere) Atanarjuat (The Fast Runner) is Canada’s first feature-length fiction film written, produced, directed and acted by Inuit. “An astonishing epic film . . . telling a story of a crime that ruptures the trust within a closely knit group, and how justice is achieved and healing begins. Director Zacharias Kunuk and his writer, Paul Apak Angilirq, collected oral versions of an Inuit legend from several elders, collated them into a story, submitted the story to the elders for suggestions and then filmed it as a collaborative expression of the group’s memory. The ‘fast runner’ of the title is a man who must run naked through the snow and is presumed to be dead, but survives; the three-hour film was entirely shot on location, and shows the tenacity and creativity of a people making a home of a frigid wilderness.”—Roger Ebert, Chicago Sun-Times. “Nothing less than a complete revelation and reinvention of cinematic form.”—Katherine Monk, Vancouver Sun. Winner, Camera d’Or for best first feature at Cannes, 2001; Guardian Award for First Directors, Edinburgh, 2001, and City Award for Best Canadian Feature Film, Toronto, 2001.

It’s the future. Fundamentalist family values fanatics have taken over the country. Artists, gays and labor unions have been driven underground. The state-run TV admonishes, “If you have to go out and you see art, do not—I repeat—do not attempt to interpret it yourself. Call 911 and let the art squad diffuse it.” Only one man arises to fight for individual freedom, artistic license, and personal excess—Existo! A once-great revolutionary leader, now chemically lobotomized after ten years in a “re-training” camp, Existo is an unstable poet-anarchist on a pogo stick—and the savior of the free world. “Imagine the Bader-Meinhoff gang led by Mickey Rooney and you get an idea of Existo, a raunchy, rollicking musical comedy . . . think early John Waters by way of Rocky Horror Picture Show.”—Ann Hornaday, The Baltimore Sun. — MARY CARBINE SCREENINGS Existo > Fri, Apr 5 > 11:30pm > 2h00 > Majestic > ORDER CODE: EXI > Filmmaker Coke Sams in person.

(Wisconsin Premiere) This shocking, front-lines depiction of the Occupation of the West Bank and the Israeli invasion of Lebanon is possibly the greatest film Gitaï has ever directed, and surely one of the greatest documentaries of all time. In 1982, as the Israeli / Palestinian conflict was intensifying, Gitaï and a small crew set out on a daily journey across the West Bank, examining the subtle and not so subtle ways Israeli occupation manifests itself. One day they come across Prime Minister Menachem Begin, several soldiers, and several Rabbis burying the bones of an ancient Jewish hero. Soon after, the war with Lebanon—orchestrated by current Israeli Prime Minister Ariel Sharon—begins. The violent reaction to this stunning film directly led to Gitaï’s blacklisting in and (partially self-)exile from Israel. Nurith Aviv is director of the unforgettable cinematography. — RAY PRIVETT Print courtesy of the British Film Institute. SCREENINGS Field Diary > Fri, Apr 5 > 5:00pm > 1h30 > Cinematheque > ORDER CODE: FDY > Introduction by guest curator Ray Privett. SPONSOR > Conney Family Fund, UWMadison Center for Jewish Studies