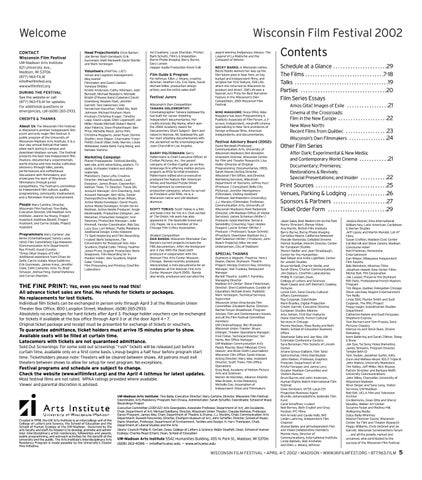 Festival Jurors Wisconsin’s Own Competition: TAMARA GOLDSWORTHY: Cinematographer Tamara Goldsworthy has built her career shooting independent documentaries. Her credits include Big Mama, which won the 2000 Academy Award for Documentary Short Subject. Born and raised in Monroe, WI, Goldsworthy got her start shooting documentaries with the acclaimed veríte cinematographer Joan Churchill in Los Angeles. BARRY POLTERMANN: Barry Poltermann is Chief Executive Officer of Civilian Pictures, Inc., the parent company of Civilian Capital, an on-line brokerage firm offering motion picture projects as IPOs to retail investors. Poltermann edited and co-executive produced the feature film American Movie, and founded Purple Onion Entertainment (a commercial production company), where he served as President until 1996. He is a Wisconsin native and UW-Madison alumnus. SCOTT TOBIAS: Scott Tobias is a film and book critic for the A.V. Club section of The Onion. His work has also appeared in The Nashville Scene and City Pages. He is a member of the Chicago Film Critics Association. Student Competition: DAN BANDA: Wisconsin filmmaker Dan Banda’s current projects include the PBS documentary After the Immigrant and A Day With the Dead, both produced in cooperation with the Mexican Fine Arts Center Museum, Chicago. Banda recently produced Mexicanidad, a mini-docu/drama for an installation at the Mexican Fine Arts Center Museum (April 2001). Banda also wrote, produced and narrated the

THE FINE PRINT: Yes, even you need to read this! All advance ticket sales are final. No refunds for tickets or packages. No replacements for lost tickets. Individual film tickets can be exchanged in person only through April 3 at the Wisconsin Union Theater Box Office, 800 Langdon Street, Madison, (608) 265-2933. Absolutely no exchanges for hard tickets after April 3. Package holder vouchers can be exchanged for tickets if available at the box office through April 3 or at the door April 4 – 7. Original ticket package and receipt must be presented for exchange of tickets or vouchers.

To guarantee admittance, ticket holders must arrive 15 minutes prior to show. Available seats will be filled at curtain time. Latecomers with tickets are not guaranteed admittance. Sold Out Screenings: For some sold out screenings “rush” tickets will be released just before curtain time, available only on a first come basis. Lineup begins a half hour before program start time. Ticketholders please note: Theaters will be cleared between shows. All patrons must exit theaters between shows to allow for setup for next program. No exceptions.

Festival programs and schedule are subject to change. Check the website (www.wifilmfest.org) and the April 4 Isthmus for latest updates. Most festival films are not rated. MPAA ratings provided where available. Viewer and parental discretion is advised.

Created in 1998, the UW Arts Institute is an intercollege unit of the College of Letters and Science, the School of Education and the School of Human Ecology at the UW-Madison. Governed by the arts faculty and staff, its mission is to develop, promote and administer interdisciplinary artist residencies, fellowships and awards, public programming, and outreach activities for the benefit of the university and the public. The Arts Institute’s Interdisciplinary Arts Residency Program is made possible by the University’s Cluster Hire Initiative.

award-winning Indigenous Always: The Legend of La Malinche and the Conquest of Mexico. BECKY BANKS: A Wisconsin native, Becky Banks worked her way up the film totem pole in New York, on big budget and independent films, and scripted her first feature, Still Life, which she returned to Wisconsin to produce and direct. Still Life won a Special Jury Prize for Best Narrative Feature in the Wisconsin’s Own Competition, 2001 Wisconsin Film Festival. MIKE MAGGIORE: Since 1994, Mike Maggiore has been Programming & Publicity Associate of Film Forum, a 3screen, independent, nonprofit cinema specializing in New York premieres of foreign arthouse films, American independents, and documentaries.