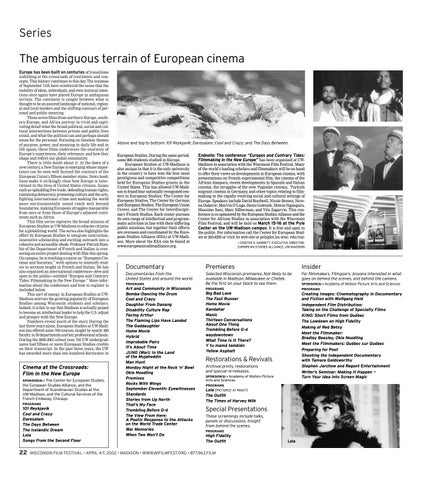 Series The ambiguous terrain of European cinema Europe has been built on centuries of transitions unfolding at the crossroads of continents and concepts. This history continues to this day. The traumas of September 11th have reinforced the sense that the mobility of ideas, individuals, and even inimical intentions once again have placed Europe in ambiguous terrain. The continent is caught between what is thought to be an assured landscape of national, regional and local borders and the shifting contours of personal and public meaning. These seven films from northern Europe, southern Europe, and Africa portray in vivid and captivating detail what the broad political, social and cultural intersections between private and public lives entail, and what the political can and perhaps should mean for the personal. Focusing on timeless themes of purpose, power, and meaning in daily life and in life spans, these films underscore the enormity of Europe’s experiences, their relevance, and how they shape and reflect our global community. There is little doubt about it: At the dawn of a new century, a New Europe is emerging whose importance can be seen well beyond the contours of the European Union’s fifteen member states. News headlines make it strikingly clear how Europe is intertwined in the lives of United States citizens. Issues such as upholding free trade, defending human rights, sustaining democracy, promoting culture and the arts, fighting international crime and making the world more environmentally sound reach well beyond boundaries, making European struggles inseparable from ours or from those of Europe’s adjacent continents such as Africa. This film series captures the broad mission of European Studies at UW-Madison to educate citizens for a globalizing world. The series also highlights the effort by European Studies to integrate instruction, innovative scholarship and exciting outreach into a cohesive and accessible whole. Professor Patrick Rumble of the Department of French and Italian is overseeing an entire project dealing with film this spring. On campus, he is teaching a course on “European Cinemas and Societies,” with options to intensify studies in sections taught in French and Italian. He has also organized an international conference—free and open to the public—entitled “Europes and Contrary Tides: Filmmaking in the New Europe.” More information about the conference and how to register is included below. This sort of energy in European Studies at UWMadison mirrors the growing popularity of European Studies among Wisconsin students and scholars. Indeed, it is fair to say that Madison is actually poised to become an intellectual leader to help the U.S. adjust and prosper with the New Europe. Numbers reveal much of the story. During the last three years alone, European Studies at UW-Madison has offered some 700 courses, taught by nearly 300 faculty in 50 departments and ten professional schools. During the 2000-2001 school year, 750 UW undergraduates had fifteen or more European Studies credits on their transcript. In the past three years, the UW has awarded more than one hundred doctorates in

Cinema at the Crossroads: Film in the New Europe SPONSOR(S) > The Center for European Studies,

the European Studies Alliance, and the Department of Scandinavian Studies at the UW-Madison, and the Cultural Services of the French Embassy, Chicago. PROGRAMS

Endnote: The conference “Europes and Contrary Tides: Filmmaking in the New Europe” has been organized at UWMadison in association with the Wisconsin Film Festival. Many of the world’s leading scholars and filmmakers will be on hand to offer their views on developments in European cinema, with presentations on French experimental film, the cinema of the African diaspora, recent developments in Spanish and Italian cinema, the struggles of the new Yugoslav cinema, Turkish migrant cinema in Germany, and other topics relating to filmmaking in the rapidly evolving social and cultural settings of Europe. Speakers include David Bordwell, Nicole Brenez, Nevena Dakovic, Marvin D’Lugo, Deniz Gokturk, Mweze Ngangura, Massimo Sani, Marc Silberman, and Vito Zagarrio. This conference is co-sponsored by the European Studies Alliance and the Center for African Studies in association with the Wisconsin Film Festival, and will be held on March 15-16 at the Pyle Center on the UW-Madison campus. It is free and open to the public. For information call the Center for European Studies at 265-6295 or visit its web-site at polyglot.lss.wisc. edu/eur. — CRISTER S. GARRETT, EXECUTIVE DIRECTOR, EUROPEAN STUDIES ALLIANCE, UW-MADISON

Documentaries from the United States and around the world.

Selected Wisconsin premieres. Not likely to be available in Madison, Milwaukee or Chetek. Be the first on your block to see them.

For filmmakers. Filmgoers. Anyone interested in what goes on behind the scenes, and behind the camera.

Art and Community in Wisconsin Bomba-Dancing the Drum Cool and Crazy Daughter From Danang Disability Culture Rap Facing Arthur The Flaming Lips Have Landed The Goddaughter Home Movie Hybrid Improbable Pairs It’s About Time JUNG (War): In the Land of the Mujaheddin Man Hunt Monday Night at the Rock ‘n’ Bowl Okie Noodling Promises Rocks With Wings September Eleventh: Eyewitnesses Standards Stories from Up North That’s My Face Trembling Before G-d The View From Here: A Poetic Response to the Attacks on the World Trade Center War Memories When Two Won’t Do

The Outfit The Times of Harvey Milk

Special Presentations These screenings include talks, panels or discussions. Insight from behind the scenes. PROGRAMS