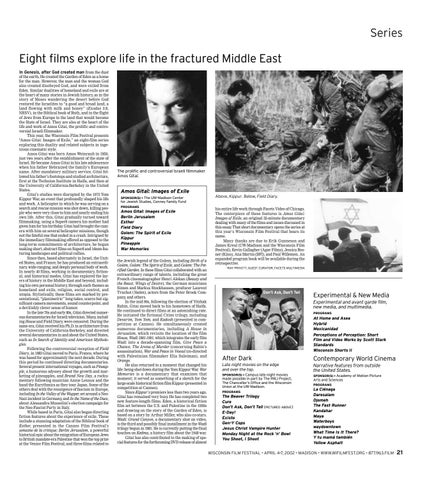 Series Eight films explore life in the fractured Middle East In Genesis, after God created man from the dust of the earth, He created the Garden of Eden as a home for the man. However, the man and the woman God also created disobeyed God, and were exiled from Eden. Similar dualities of homeland and exile are at the heart of many stories in Jewish history, as in the story of Moses wandering the desert before God restored the Israelites to “a good and broad land, a land flowing with milk and honey” (Exodus 3:8, NRSV), in the Biblical book of Ruth, and in the flight of Jews from Europe to the land that would become the State of Israel. They are also at the heart of the life and work of Amos Gitai, the prolific and controversial Israeli filmmaker. This year, the Wisconsin Film Festival presents “Amos Gitai: Images of Exile,” an eight-film series exploring this duality and related subjects in ingenious cinematic style. Amos Gitai was born Amos Weinraub in 1950, just two years after the establishment of the state of Israel. He became Amos Gitai in his late adolescence when his father Hebraized the family’s European name. After mandatory military service, Gitai followed his father’s footsteps and studied architecture, first at the Technion Institute in Haifa, and then at the University of California-Berkeley in the United States. Gitai’s studies were disrupted by the 1973 Yom Kippur War, an event that profoundly shaped his life and work. A helicopter in which he was serving on a search and rescue mission was shot down, killing people who were very close to him and nearly ending his own life. After this, Gitai gradually turned toward filmmaking, using a Super8 camera his mother had given him for his birthday. Gitai had brought the camera with him on several helicopter missions, though not the fateful one that ended in a crash. Intrigued by the immediacy filmmaking offered as opposed to the long-term commitments of architecture, he began making short, abstract films on Super8 and 16mm featuring landscapes and political rallies. Since then, based alternately in Israel, the United States, and France, he has produced an extraordinary, wide-ranging, and deeply personal body of work. In nearly 40 films, working in documentary, fictional, and historical modes, Gitai has explored the layers of history in the Middle East and beyond, including his own personal history, through such themes as homeland and exile, religion, social control, and utopia. Stylistically, these films are marked by presentational, “planimetric” long takes, scarce but significant camera movements, sound counterpoint, and a devilishly clever sense of humor. In the late 70s and early 80s, Gitai directed numerous documentaries for Israeli television. Many, including House and Field Diary, were censored. During the same era, Gitai received his Ph.D. in architecture from the University of California-Berkeley, and directed several documentaries in and about the United States, such as In Search of Identity and American Mythologies. Following the controversial reception of Field Diary, in 1983 Gitai moved to Paris, France, where he was based for approximately the next decade. During this period he continued directing documentaries. Several present international voyages, such as Pineapple, a humorous odyssey about the growth and marketing of pineapples, and Brand New Day, a rockumentary following musician Annie Lennox and the band the Eurythmics as they tour Japan. Some of the others deal with the resurgence of fascism in Europe, including In the Valley of the Wupper, set around a NeoNazi incident in Germany, and In the Name of the Duce, about Alessandra Mussolini’s election campaign for the Neo-Fascist Party in Italy. While based in Paris, Gitai also began directing fiction features about the experience of exile. These include a stunning adaptation of the Biblical book of Esther, presented in the Cannes Film Festival’s semaine de la critique; Berlin Jerusalem, a powerful historical epic about the emigration of European Jews to British mandate-era Palestine that won the top prize at the Venice Film Festival; and three films related to

Amos Gitaï: Images of Exile Berlin Jerusalem Esther Field Diary Golem: The Spirit of Exile Kippur Pineapple War Memories the Jewish legend of the Golem, including Birth of a Golem, Golem: The Spirit of Exile, and Golem: The Petrified Garden. In these films Gitai collaborated with an extraordinary range of talents, including the great French cinematographer Henri Alekan (Beauty and the Beast, Wings of Desire), the German musicians Simon and Markus Stockhausen, producer Laurent Truchot (Yeelen), actors from the Peter Brook Company, and others. In the mid 90s, following the election of Yitzhak Rabin, Gitai moved back to his hometown of Haifa. He continued to direct films at an astonishing rate. He initiated the fictional Cities trilogy, including Devarim, Yom Yom, and Kadosh (presented in competition at Cannes). He simultaneously created numerous documentaries, including A House in Jerusalem, which revisits the location of the film House, Wadi 1981-1991, which integrates the early film Wadi into a decade-spanning film, Give Peace a Chance, The Arena of Murder (concerning Rabin’s assassination), War and Peace in Vesoul (co-directed with Palestinian filmmaker Elia Suleiman), and Orange. He also returned to a moment that changed his life: being shot down during the Yom Kippur War. War Memories is a documentary that examines that moment; it served as something of a sketch for the large-scale historical fiction film Kippur (presented in competition at Cannes). Since Kippur’s premiere less than two years ago, Gitai has remained very busy. He has completed two new feature-length films. Eden, a historical fiction film set between the U.S. and Palestine in the 1930s and drawing on the story of the Garden of Eden, is based on a story by Arthur Miller, who also co-stars. Wadi: Grand Canyon, a documentary shot on video, is the third and possibly final installment in the Wadi trilogy begun in 1981. He is currently putting the final touches on Kedma, a history film about the 1948 war. Gitai has also contributed to the making of special features for the forthcoming DVD release of almost

Above, Kippur. Below, Field Diary. his entire life work through Facets Video of Chicago. The centerpiece of these features is Amos Gitai: Images of Exile, an original 32-minute documentary dealing with many of the films and issues discussed in this essay. That short documentary opens the series at this year’s Wisconsin Film Festival that bears its name. Many thanks are due to Erik Gunneson and James Kreul (UW-Madison and the Wisconsin Film Festival), Kevin Gallagher (Agav Films), Jessica Rosner (Kino), Ana Martin (BFI), and Paul Willemen. An expanded program book will be available during the retrospective. -RAY PRIVETT, GUEST CURATOR, FACETS MULTIMEDIA

Late night movies on the edge and over the top.

Narrative features from outside the United States.

made possible in part by The RWJ Project, The Chancellor’s Office and the Wisconsin Union at the UW-Madison. PROGRAMS