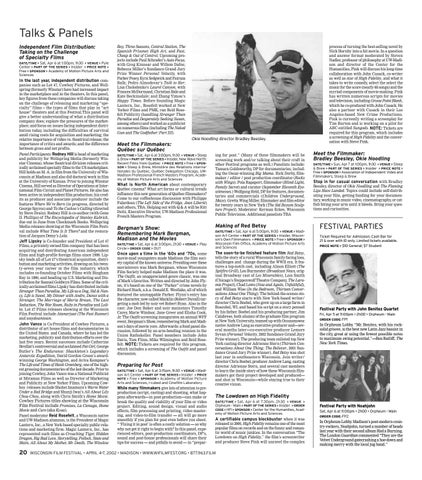 In the last year, independent distribution companies such as Lot 47, Cowboy Pictures, and Wellspring (formerly Winstar) have had increased impact in the marketplace and in the theaters. In this panel, key figures from these companies will discuss taking on the challenge of releasing and marketing “specialty” films – the types of films that play in “art house” theaters and at this Festival.This panel will give a better understanding of what a distribution company does; explore the pressures of the marketplace; and focus on issues facing independent distribution today, including the difficulties of survival amid rising costs for acquisition and marketing; the relative importance of video vs. theatrical release; the importance of critics and awards; and the difference between gross and net profits. Panel Participants: Rodney Hill is head of marketing and publicity for Wellspring Media (formerly Winstar Cinema), whose theatrical division releases critically acclaimed specialty films to the US marketplace. Hill holds an M. A. in film from the University of Wisconsin at Madison and also did doctoral work in film at the University of Kansas. Prior to joining Winstar Cinema, Hill served as Director of Operations at International Film Circuit and Planet Pictures. He also has been active in independent film production; his credits as producer and associate producer include the features Where We’re Born (in progress, directed by George Spyros) and To the Cuckoo’s Calling (directed by Steve Drain). Rodney Hill is co-author (with Gene D. Phillips) of The Encyclopedia of Stanley Kubrick, due out in June from Checkmark Books. Wellspring Media releases showing at the Wisconsin Film Festival include What Time Is It There? and the restoration of Jacques Demy’s Lola. Jeff Lipsky is Co-founder and President of Lot 47 Films, a privately owned film company that has been acquiring and distributing American independent films and high-profile foreign films since 1999. Lipsky leads all of Lot 47’s theatrical acquisition, distribution and marketing activities, drawing on his twenty-seven year career in the film industry, which includes co-founding October Films with Bingham Ray in 1990, and heading up U.S. Marketing and Distribution for Samuel Goldwyn Films. Some of the critically-acclaimed films Lipsky has distributed include Stranger Than Paradise, My Life as a Dog, Sid & Nancy, Life is Sweet, My Dinner with Andre, Dance with a Stranger, The Marriage of Maria Braun, The Last Seduction, The War Room, Ruby in Paradise and Lolita. Lot 47 Films releases showing at the Wisconsin Film Festival include Atanarjuat (The Fast Runner) and waydowntown. John Vanco is Co-President of Cowboy Pictures, a distributor of art house films and documentaries in the United States and Canada, where he has led the marketing, publicity and distribution efforts over the last five years. Recent successes include Catherine Breillat’s controversial and acclaimed Fat Girl, George Butler’s The Endurance: Shackleton’s Legendary Antarctic Expedition, David Gordon Green’s awardwinning George Washington, and Aviva Kempner’s The Life and Times of Hank Greenberg, one of the highest grossing documentaries of the last decade. Prior to joining Cowboy, John Vanco was a National Publicist at Miramax Films as well as Director of Marketing and Publicity at New Yorker Films. Upcoming Cowboy releases include Shohei Imamura’s Warm Water Under a Red Bridge and Shunji Iwai’s All About Lily Chou-Chou, along with Chris Smith’s Home Movie.

What is North American about contemporary Québec cinema? What art forms or cultural trends influence this new generation of Québec filmmakers? Come to our coffeehouse discussion with Philippe Falardeau (The Left Side of the Fridge, Jean Liberté) and others, TBA. Helping out with Q & A will be Ritt Deitz, Executive Director, UW-Madison Professional French Masters Program.

movie-mad youngsters made Madison the film society capital of the known universe. Presiding over these movielovers was Mark Bergman, whose Wisconsin Film Society helped make Madison the place it was. The Outfit, an unappreciated genre classic, was one of Mark’s favorites. Written and directed by John Flynn, it’s based on one of the “Parker” crime novels by Richard Stark, a.k.a. Donald E. Westlake, all of which featured the unstoppable Parker. Flynn’s entry has the character, now called Macklin (Robert Duvall) targeting a mob led by noir vet Robert Ryan. Also in the cast: Joe Don Baker and noir mainstays Timothy Carey, Marie Windsor, Jane Greer and Elisha Cook, Jr. The Outfit screening inaugurates an annual WFF event, Bergman’s Show, remembering Mark and Madison’s days of movie yore. Afterwards: a fond panel discussion, followed by an arm-bending reunion in the Union Rathskeller. Panel members include John Davis, Tom Flinn, Mike Wilmington and Reid Rosefelt. NOTE: Tickets are required for this program, which includes a screening of The Outfit and panel discussion.

While many filmmakers give lots of attention to preproduction (script, casting) and shooting, what happens afterwards—in post-production—can make or break the quality and viability of your film or video project. Editing, sound design, visual and audio effects, film processing and printing, video mastering, and video-to-film transfer — all will go more smoothly if you plan for post even before you shoot. “ ‘Fixing it in post’ is often a costly solution — so why why not get it right to begin with? In this panel, experienced editors, post-production coordinators, DP’s, sound and post-house professionals will share their tips for success — and pitfalls to avoid — in “prepar-

process of turning the best-selling novel by Nick Hornby into a hit movie. In a question and answer format moderated by Steven Nadler, professor of philosophy at UW-Madison and director of the Center for the Humanities, Pink will discuss his long-time collaboration with John Cusack, co-writer as well as star of High Fidelity, and what it takes to write comedy, select the select the music for the score (nearly 60 songs) and the myriad components of movie-making. Pink has written numerous scripts for movies and television, including Grosse Point Blank, which he co-produced with John Cusack. He also a partner with Cusack in their Los Angeles-based New Crime Productions. Pink is currently writing a screenplay for Tim Burton and is working on a pilot for ABC entitled Sungods. NOTE: Tickets are required for this program, which includes a screening of High Fidelity and the conversation with Steve Pink.

Stop in for casual conversation with Bradley Beesley, director of Okie Noodling and The Flaming Lips Have Landed. Topics could include self-distributing your film, getting funding for your documentary, working in music video, cinematography, or catfish biting your arm until it bleeds. Bring your questions and curiosities.

In Orpheum Lobby. “Mr. Benitez, with his rocksolid groove, is the best new Latin Jazz bassist in the city, great at using the fewest possible notes to maximum swing potential.”—Ben Ratliff, The New York Times.

A certifiable campus blockbuster when it was released in 2000, High Fidelity remains one of the most popular films on records and on the funny and romantic world of music junkies. In the conversation “The Lowdown on High Fidelity,” the film’s screenwriter and producer Steve Pink will unravel the complex

In Orpheum Lobby. Madison’s post-modern country-rockers, Noahjohn, turned a number of heads last year with their second album Had a Burning. The London Guardian commented “They are the Velvet Underground gatecrashing a hoe-down and making merry with the local jug band.”