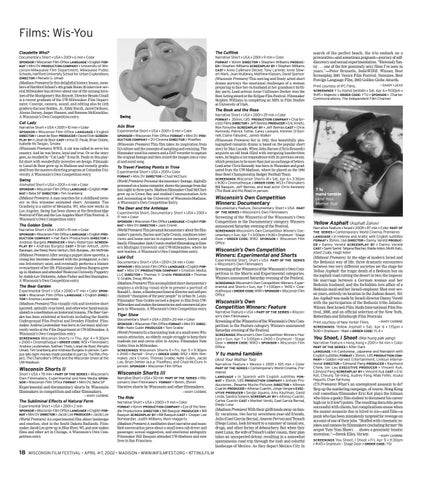 Aüs Blue Experimental Short > USA > 2001 > 5 min > Color SPONSOR > Wisconsin Film Office FORMAT > Mini DV PRODUCTION COMPANY > DV-Cinema DIRECTOR > Pixelflex (Wisconsin Premiere) This film takes its inspiration from DJ culture and the concepts of sampling and remixing. The filmmaker used his camera and a DAT recorder to capture the original footage and then mixed the images into a visual and aural song.

Experimental and documentary shorts by Wisconsin filmmakers in competition and other filmmakers.

Narative shorts by Wisconsin and other filmmakers.

The Book and the Rose Swing

Y tu mamá también (And Your Mother Too)

Narrative Feature > USA > PART OF THE SERIES > Wisconsin’s Own Filmmakers

(Midwest Premiere) At the edge of modern Israel and the Bedouin way of life, three dramatic encounters between two very different societies set the stage for Yellow Asphalt: the tragic death of a Bedouin boy on the asphalt road cutting the desert in two; the impossible marriage between a German woman and her Bedouin husband; and the forbidden love affair of a Bedouin maid and her Israeli employer. Shot over seven years, entirely on location in the Judean desert, Yellow Asphalt was made by Israeli director Danny Vereté with the participation of the Beduoin tribe Jahalin. Winner, Best Israeli Film, Haifa International Film Festival, 2000, and an official selection of the New York, Rotterdam and Edinburgh Film Festivals.

Screening of the Winner(s) of the Wisconsin’s Own Competition in the Feature category. Winners announced Saturday evening of the Festival.

(US Premiere) What’s an unemployed assassin to do? Step up the marketing campaign, of course. Hong Kong cult comedian/filmmaker Eric Kot plays the hitman who hires a geeky film student to document his career high (or is it low?) points. The resulting docu-hits prove successful with clients, but complications ensue when the auteur-assassin duo is hired to ice—and film—a punk who has been mistakenly targeted for revenge on account of one of their jobs. “Stuffed with cinematic injokes and cameos by filmmakers (including former 70s sexpot Yum Yum Shaw) . . . shows a genuinely lunatic invention.”—Derek Elley, Variety. — MARY CARBINE SCREENINGS You Shoot, I Shoot > Fri, Apr 5 > 11:30pm > 1h45 > Orpheum - Stage Door > ORDER CODE: YSI