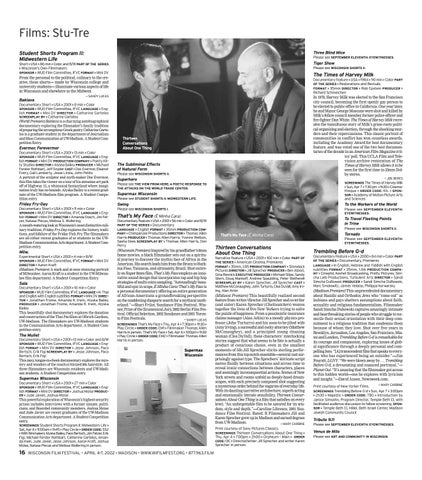 The Times of Harvey Milk

From the personal to the political, culinary to the creative, these shorts— made by Wisconsin college and university students— illuminate various aspects of life in Wisconsin and elsewhere in the Midwest.

In 1978, Harvey Milk was elected to the San Francisco city council, becoming the first openly gay person to be elected to public office in California. One year later, he and Mayor George Moscone were shot and killed by Milk’s fellow council member, former police officer and fire fighter Dan White. The Times of Harvey Milk recreates the tumultuous story of Milk’s grass-roots political organizing and election, through the shocking murders and their repercussions. This classic portrait of communities in conflict has won countless awards, including the Academy Award for best documentary feature, and was voted one of the two best documentaries of the decade in an American Film Magazine critics’ poll. This UCLA Film and Television archive restoration of The Times of Harvey Milk allows it to be seen for the first time in 35mm Dolby stereo.

Thirteen Conversations About One Thing

Superhero Please see THE VIEW FROM HERE: A POETIC RESPONSE TO THE ATTACKS ON THE WORLD TRADE CENTER.

To the Workers of the World

(Midwest Premiere) This beautifully realized second feature from writer/director Jill Sprecher and co-writer (and sister) Karen Sprecher (Clockwatchers) weaves together the lives of five New Yorkers trying to solve the puzzle of happiness. From a pessimistic insurance claims manager (Alan Arkin) to a moody physics professor (John Turturro) and his soon-to-be-jilted wife (Amy Irving), a successful and cocky attorney (Matthew McConaughey), and a principled young cleaning woman (Clea DuVall), these characters’ interlocking stories suggest that what seems to be fate is actually a product of conscious choice, even in the smallest moments of life.Jill Sprecher elicits sterling performances from this top-notch ensemble—several cast surprisingly against type. The Sprechers’ intricate script moves fluidly between situations and across time to reveal ironic connections between characters, places and seemingly inconsequential actions. Scenes of New York streets and rooms unfold as deeply-hued dreamscapes, with each precisely composed shot suggesting a mysterious order behind the vagaries of everyday life. With its dazzling narrative architecture, superb acting and emotionally literate sensibility, Thirteen Conversations About One Thing is a film that satisfies on every level. “An unforgettable film to be savored for its wisdom, style and depth.”—Caroline Libresco, 2001 Sundance Film Festival. Rated: R Filmmakers Jill and Karen Sprecher grew up in Madison and earned degrees from UW-Madison. — MARY CARBINE Print courtesy of Sony Pictures Classics. SCREENINGS Thirteen Conversations About One Thing > Thu, Apr 4 > 7:00pm > 2h00 > Orpheum - Main > ORDER CODE: 13C > Director/writer Jill Sprecher and writer Karen Sprecher in person.

(Madison Premiere) This unprecedented documentary about Hasidic and Orthodox Jews who “come out” as lesbians and gays shatters assumptions about faith, sexuality and religious fundamentalism. Filmmaker Sandi Simcha Dubowski captures amazingly intimate and heartbreaking stories of people who struggle to reconcile their sexual orientation with their deep commitment to a religious tradition that condemns them because of whom they love. Shot over five years in Brooklyn, Jerusalem, Los Angeles, San Francisco, Miami and London, Trembling Before G-d is remarkable for its courage and compassion, exploring issues of global significance through a deeply personal and compelling lens. “[A] transcendent film that speaks to everyone who has experienced being an outsider.”—Jim Fouratt, LGNY. “We were blown away by . . . Trembling Before G-d, a devastating and nuanced portrayal.”— Planet Out. “It’s amazing that the filmmaker got access to this hidden world—one he explores with lyricism and insight.”—David Ansen, Newsweek.com. — MARY CARBINE Print courtesy of New Yorker Films. SCREENINGS Trembling Before G-d > Sun, Apr 7 > 3:00pm > 2h30 > Majestic > ORDER CODE: TBG > Introduction by Janice Simsohn, Program Director, Temple Beth El, with facilitated audience discussion to follow screening. SPONSOR > Temple Beth El, Hillel, Beth Israel Center, Madison Jewish Community Council