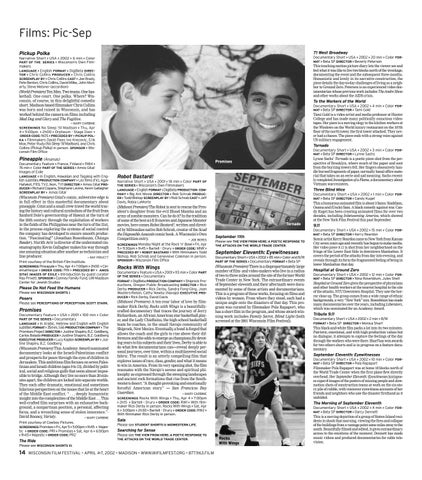 Documentary Short > USA > 2002 > 20 min > Color FORMAT > Beta SP DIRECTOR > Beverly Peterson This touching motion picture diary lets the viewer see and feel what it was like to live two blocks north of the wreckage, documenting the event and the subsequent three months. Humanistic and lovely in its narrative construction, the piece details the day-to-day challenges of living as a neighbor to Ground Zero. Peterson is an experienced video documentarian whose previous work includes The Andre Show and other works about the AIDS crisis.

(World Premiere) Ten Men. Two teams. One basketball. One court. One polka. Where? Wisconsin, of course, in this delightful comedic short. Madison-based filmmaker Chris Collins was born and raised in Wisconsin, and has worked behind the camera on films including Mad Dog and Glory and The Fugitive.

To the Workers of the World Documentary Short > USA > 2002 > 4 min > Color FORMAT > Beta SP DIRECTOR > Tami Gold Tami Gold is a video artist and media professor at Hunter College and has made many politically conscious videotapes. Her piece is a moving elegy to the kitchen workers at the Windows on the World luxury restaurant on the 107th floor of the north tower, the first tower attacked. They never had a chance. The piece ends with a strong voice against US military engagement.

(Wisconsin Premiere) Gitaï’s comic, subversive edge is in full effect in this masterful documentary about pineapple. Gitaï and a small crew travel the world tracing the history and cultural symbolism of the fruit from Sanford Dole’s governorship of Hawaii at the turn of the 20th century through the exploitation of workers in the fields of the Philippines near the turn of the 21st, in the process exploring the systems of social control the company has developed to ensure smooth production. “Fascinating!” (Jonathan Rosenbaum, Chicago Reader). Nurith Aviv is director of the understated cinematography. Kevin Gallagher makes his way through one amusing situation after another as technician and line producer. — RAY PRIVETT Print courtesy of the British Film Institute. SCREENINGS Pineapple > Thu, Apr 4 > 7:00pm > 2h00 > Cinematheque > ORDER CODE: PIN > PRECEDED BY > AMOS GITAÏ: IMAGES OF EXILE > Introduction by guest curator Ray Privett. SPONSOR > Conney Family Fund, UW-Madison Center for Jewish Studies

Please Do Not Feed the Humans Please see WISCONSIN SHORTS I.

(Wisconsin Premiere) This Academy Award-nominated documentary looks at the Israeli-Palestinian conflict and prospects for peace through the eyes of children in Jerusalem. This ambitious film focuses on seven Palestinian and Israeli children (ages 9 to 13), divided by political, social and religious gulfs that seem almost impossible to bridge. Although they live no more than 20 minutes apart, the children are locked into separate worlds. They each offer dramatic, emotional and sometimes hilarious perspectives on the issues that lie at the heart of the Middle East conflict. “ . . . deeply humanistic insight into the complexities of the Middle East . . . This well-crafted film surprises with an exhaustive background, a nonpartisan position, a personal, affecting focus, and a wrenching sense of stolen innocence.”David Rooney, Variety. — MARY CARBINE Print courtesy of Cowboy Pictures. SCREENINGS Promises > Fri, Apr 5 > 5:00pm > 1h45 > Majestic > ORDER CODE: PR1 > Promises > Sat, Apr 6 > 6:00pm > 1h45 > Majestic > ORDER CODE: PR2

(Midwest Premiere) The Robot is sent to rescue the President’s daughter from the evil Blood Mamba and an army of zombie monsters. Can he do it? In the tradition of some of the best sci-fi B-movies and Japanese Monster movies, here comes Robot Bastard!, written and directed by Milwaukee native Rob Schrab, creator of the Scud the Disposable Assassin comic book. A Wisconsin’s Own Competition entry. — JOE BERES SCREENINGS Monday Night at the Rock ‘n’ Bowl > Fri, Apr 5 > 11:30pm > 1h45 > Bartell - Drury > ORDER CODE: MNR > PRECEDED BY > ROBOT BASTARD! > With filmmakers Todd

(Midwest Premiere) A ten-year labor of love by filmmaker Rick Derby, Rocks with Wings is a beautifullycrafted documentary that traces the journey of Jerry Richardson, an African American star basketball player, and the Lady Chieftains, the high school basketball team he coaches, in the small Navajo community of Shiprock, New Mexico. Eventually, a bond is forged that allows the coach and the girls to rise above their differences and the odds to emerge as champions.By devoting years to his subjects and their lives, Derby is able to do what few documentarians can—reveal deeply personal journeys, over time, within a multilayered social fabric. The result is an utterly compelling film that explores issues of race, class, gender, and what it means to win in America. From its very opening shot, the film resonates with the Navajo’s serene and spiritual philosophy as expressed through the sweeping landscapes and ancient rock formations that rise from the Southwestern desert. “A thought-provoking and emotionally forceful American story.” — San Francicso Bay Guardian. — MARY CARBINE

Tornado September 11th Please see THE VIEW FROM HERE: A POETIC RESPONSE TO THE ATTACKS ON THE WORLD TRADE CENTER.

(Wisconsin Premiere) There is a disproportionately large number of film- and video-makers who live in a radius of two to three miles around the site of the former World Trade Center in New York. The extraordinary events of September eleventh and their aftermath were documented by some of these artists and documentarians. This is a program of these works, focusing on films and videos by women. From where they stood, each had a unique angle onto the disasters of that day. This program was curated by filmmaker Pola Rapaport, who has a short film in the program, and whose award-winning work includes Family Secret, Blind Light (both screened at the 2001 Wisconsin Film Festival).

Scenic artist Kerry Reardon came to New York from Kansas City seven years ago and recently has begun to make media. Her video piece 9.11 is shot from her neighborhood on the fringe of the Lower East Side in downtown Manhattan. It covers the period of the attacks from day into evening, and reveals through its form the fragmented feeling of being in lower Manhattan that day.

Hospital at Ground Zero Documentary Short > USA > 2002 > 12 min > Color FORMAT > Beta SP DIRECTOR > Nina Rosenblum, Jules Shell Hospital at Ground Zero gives the perspective of physicians and other health workers at the nearest hospital to the site of the attacks, NYU Downtown Hospital. They saw the horror close up. The group comes from a wide range of ethnic backgrounds, a very “New York” mix. Rosenblum has made many documentaries over the years, including Liberators, which was nominated for an Academy Award.

Tribute 9.11 Documentary Short > USA > 2002 > 2 min > B/W FORMAT > Beta SP DIRECTOR > Monica Sharf This black-and-white film packs a lot into its two minutes. Patriotic, emotional, and with high production values but no dialogue, it attempts to capture the feelings of the day through the workers who were there. Sharf has won awards for two others shorts and is in progress on a feature documentary.

The Morning of September Eleventh

Documentary Short > USA > 2002 > 10 min > Color FORMAT > Beta SP DIRECTOR > Pola Rapaport Filmmaker Pola Rapaport was at home 18 blocks north of the World Trade Center when the first plane flew directly overhead. Her September Eleventh: Eyewitnesses juxtaposes super-8 images of the posters of missing people and slowmotion shots of construction teams at work on the six-story pile of rubble, with voiceover eyewitness accounts of her friends and neighbors who saw the disaster firsthand as it unfolded.

With filmmaker Rick Derby in person.

Please see THE VIEW FROM HERE: A POETIC RESPONSE TO THE ATTACKS ON THE WORLD TRADE CENTER.

Documentary Short > USA > 2002 > 3 min > Color FORMAT > Beta SP DIRECTOR > Lynne Sachs Lynne Sachs’ Tornado is a poetic piece shot from the perspective of Brooklyn, where much of the paper and soot from the burning towers fell. Her fingers obsessively handle burned fragments of paper, normally banal office material that takes on an eerie and sad meaning. Sachs recently completed Investigation of a Flame, a documentary about Vietnam war-resisters.

Documentary Short > USA > 2002 > 4 min > Color FORMAT > Beta SP DIRECTOR > Darcy Dennett This is a moving depiction of a group of Staten Island residents in shock that morning, viewing the fires and collapse of the buildings from a vantage point some miles away to the south. Beautifully filmed and edited, it gives extraordinary access to the emotions of the moment. Dennett has made music videos and produced documentaries for cable television.