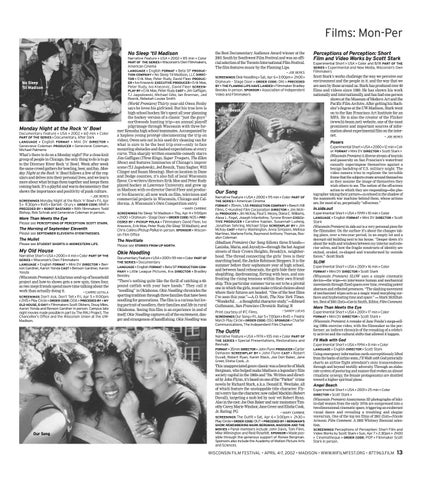 Films: Mon-Per No Sleep ‘til Madison

No Sleep ‘til Madison

What’s there to do on a Monday night? For a close-knit group of people in Chicago, the only thing to do is to go to the Diversey River Rock ‘n’ Bowl. Week after week the same crowd gathers for bowling, beer, and fun. Monday Night at the Rock ‘n’ Bowl follows a few of the regulars and delves into their personal lives, and we learn more about what brings them together and keeps them coming back. It’s a playful and warm documentary that shows the importance and positivity of punk culture. — JOE BERES SCREENINGS Monday Night at the Rock ‘n’ Bowl > Fri, Apr 5 > 11:30pm > 1h45 > Bartell - Drury > ORDER CODE: MNR > PRECEDED BY > ROBOT BASTARD! > With filmmakers Todd

The Morning of September Eleventh

Aaron Yonda and Benson Gardner in person. Campus late night movies made possible in part by The RWJ Project, The Chancellor’s Office and the Wisconsin Union at the UWMadison.

Please see STORIES FROM UP NORTH.

“There’s nothing quite like the thrill of catching a 60pound catfish with your bare hands.” They call it “noodling” in Oklahoma. Okie Noodling chronicles the sporting tradition through three families that have been noodling for generations. The film is a curious but loving portrait of noodlers, their families and life in rural Oklahoma. Seeing this film is an experience in and of itself; Okie Noodling captures all of the excitement, danger and strangeness of handfishing. Okie Noodling was

Scott Stark’s works challenge the way we perceive our environment and the people in it, and the way that we are seen by those around us. Stark has produced over 60 films and videos since 1980. He has shown his work nationally and internationally, and has had one-person shows at the Museum of Modern Art and the Pacific Film Archive. After getting his Bachelor’s degree at the UW-Madison, Stark went on to the San Francisco Art Institute for an MFA. He is also the creator of the Flicker (www.hi-beam.net) website, one of the most prominent and important sources of information about experimental film on the internet. — JOE BERES

(Madison Premiere) Our Song follows three friends— Lanisha, Maria, and Joycelyn—through the hot August streets of their Crown Heights, Brooklyn, neighborhood. The thread connecting the girls’ lives is their marching band, the Jackie Robinson Steppers. It is the summer before their sophomore year of high school, and between band rehearsals, the girls bide their time shoplifting, daydreaming, flirting with boys, and confronting the rising tensions within their own friendship. This particular summer turns out to be a pivotal one in which the girls, must make critical choices about where their futures are headed. “One of the best films I’ve seen this year.”—A.O. Scott, The New York Times. “Wonderful . . . a thoughtful character study.”—Edward Guthmann, San Francisco Chronicle. Rating: R — SANDY LUCAS Print courtesy of IFC Films. SCREENINGS Our Song > Fri, Apr 5 > 7:00pm > 1h45 > Fredric March Play Circle > ORDER CODE: OSG SPONSOR > Charter Communications, The Independent Film Channel

This unappreciated genre classic was a favorite of Mark Bergman, who helped make Madison a legendary film society capital in the 1960s and ‘70s. Written and directed by John Flynn, it’s based on one of the “Parker” crime novels by Richard Stark, a.k.a. Donald E. Westlake, all of which feature the unstoppable title character. Flynn’s entry has the character, now called Macklin (Robert Duvall), targeting a mob led by noir vet Robert Ryan. Also in the cast: Joe Don Baker and noir mainstays Timothy Carey, Marie Windsor, Jane Greer and Elisha Cook, Jr. Rating: PG — MARY CARBINE

sible through the generous support of Ronee Bergman. Sponsors also include the Academy of Motion Picture Arts and Sciences.

Experimental Short > USA > 2000 > 12 min > Color FORMAT > Mini DV DIRECTOR > Scott Stark > (Wisconsin Premiere) A diverse stream of tourists and passersby on San Francisco’s waterfront casually superimpose themselves against a benign backdrop of U.S. military might. The video camera tries to replicate the invisible frame that the subjects create around themselves as they assume the image of themselves they wish others to see. The notion of the off-screen action to which they are responding—the photographer taking their picture—is echoed in the shadow of the mammoth war machine behind them, whose actions are, for most of us, perpetually “off-screen.”

in.side.out Experimental Short > USA > 1999 > 10 min > Color LANGUAGE > English FORMAT > Mini DV DIRECTOR > Scott Stark (Wisconsin Premiere) in.side.out is a very personal piece for the filmmaker. On the surface it’s about the changes taking place, over a two-year period, in an empty lot and a decrepit old building next to his house. “Deeper down it’s about the walls and windows between my interior and exterior selves, and how the fragile constructs of identity are etched, eroded, re-shaped and transformed by outside forces.” -Scott Stark

More Than Meets the Eye Experimental Short > USA > 2001 > 17 min > Color FORMAT > Mini DV DIRECTOR > Scott Stark > (Wisconsin Premiere) A remake of Jane Fonda’s mega-selling 1980s exercise video, with the filmmaker as the performer; an indirect chronicle of the remaking of a celebrity activist and the cultural shifts that allowed it happen.