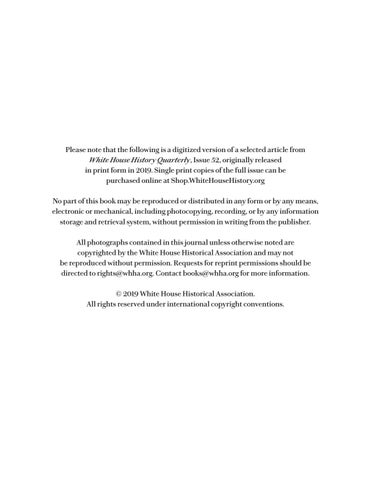 Please note that the following is a digitized version of a selected article from White House History Quarterly, Issue 52, originally released in print form in 2019. Single print copies of the full issue can be purchased online at Shop.WhiteHouseHistory.org No part of this book may be reproduced or distributed in any form or by any means, electronic or mechanical, including photocopying, recording, or by any information storage and retrieval system, without permission in writing from the publisher. All photographs contained in this journal unless otherwise noted are copyrighted by the White House Historical Association and may not be reproduced without permission. Requests for reprint permissions should be directed to rights@whha.org. Contact books@whha.org for more information. ÂŠ 2019 White House Historical Association. All rights reserved under international copyright conventions.

Mid-Century Fashion and the First Ladies: From Ready-to-Wear to Haute Couture

In this issue of White House History Quarterly we highlight the fashions of the first ladies during the middle of the twentieth century. Eleanor Roosevelt, Mamie Eisenhower, Jacqueline Kennedy, Betty Ford: each took a different approach, for different reasons. Their choices—from ready-to-wear to haute couture—reflect their times and what they saw as their role, as well as, of course, their personal taste. Our cover features sketches by designer Oleg Cassini for an evening dress and a daytime dress for Jacqueline Kennedy ( front cover) and a wool suit designed by Cassini for Mrs. Kennedy (above) on display at the Metropolitan Museum of Art. Cassini’s appreciation for the first lady’s regal bearing is realized in an attached train on the gown, a playfully imperial touch for a first lady who knew great popularity in her time.

Board of Directors CHAIRMAN

morgan blattenberg is a technician in the Collection Management Services Department of the National Museum of American History, Smithsonian Institution. an n h and is the founder and CEO of the jewelry design firm Ann Hand, LLC, based in the Georgetown neighborhood of Washington, D.C. She has designed pieces for every first lady since Jacqueline Kennedy. kr i st en a . h unt er is the senior editorial and production manager at the White House Historical Association. haley m. rivero is the director of external relations and special projects at the White House Historical Association.

kr i st i n s ki n ner is a decorative arts historian. She is currently a collections technician at the Edsel and Eleanor Ford House in Gross Point Shores, Michigan. lonn taylor is a native of Spartanburg, South Carolina. He retired from the Smithsonian Institution, where he was a historian at the National Museum of American History, in 2002 and now lives in Fort Davis, Texas.

THE EDITOR WISHES TO THANK

The Office of the Curator, The White House

TEARDROPS OF THE MOON: Memories of Designing Jewelry for the First Ladies

an n h and

They bring to mind our first first lady, “Lady Washington” as she was sometimes called. In her portraits she may look the antithesis of style in her time, when an informal, French taste for muslin dominated. But she still, in the utmost chic, donned her domino—the same mask the Lone Ranger usurped 150 years later—when she and the president attended the theater, nor did she remove it. Their choices and the reasons for them mirror the first ladies themselves.

The White House presents a kaleidoscope of images relevant to the presidency, while the central image, the White House itself, remains the same. All the other images are transitory and rearranged in time by those who live in the White House. It is these ancillary images that personalize the presidency, administration by administration, and help to define a particular era. Among these are the fashions espoused by the first ladies. In this issue of White House History Quarterly we learn about first ladies’ tastes and choices in the twentieth century, in the decades that today’s collectors call “Mid-Century Modern.” There is great variety. All wanted to look good, good,look lookappropriate, appropriate,and andeach eachone onetook took a different a different approach, approach, for different for different reasons. reasons. Their public Their public attitudes attitude toward toward thethe world worldand and their times, as well as the importance of their own roles, are reflected in their distinctive styles. 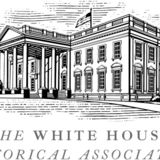