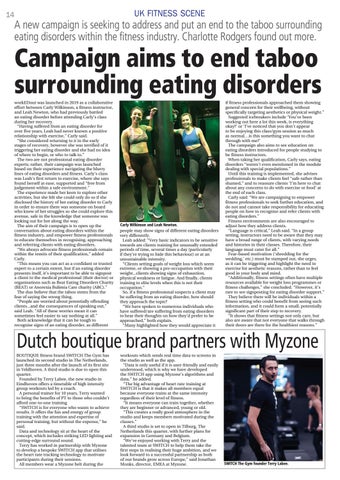 A new campaign is seeking to address and put an end to the taboo surrounding eating disorders within the fitness industry. Charlotte Rodgers found out more.

Campaign aims to end taboo surrounding eating disorders workEDout was launched in 2019 as a collaborative effort between Carly Wilkinson, a fitness instructor, and Leah Newton, who had previously battled an eating disorder before attending Carly’s class during her recovery. “Having suffered from an eating disorder for over five years, Leah had never known a positive relationship with exercise,” Carly said. “She considered returning to it in the early stages of recovery, however she was terrified of it triggering her eating disorder and she had no idea of where to begin, or who to talk to.” The two are not professional eating disorder experts; rather, their campaign was launched based on their experience navigating the blurry lines of eating disorders and fitness. Carly’s class was Leah’s first return to exercise, where she says found herself at ease, supported and “free from judgement within a safe environment.” The experience made her keen to explore other activities, but she felt she could only do so if she disclosed the history of her eating disorder to Carly in order to ensure there was someone on board who knew of her struggles so she could explore this avenue, safe in the knowledge that someone was looking out for her along the way. The aim of their campaign is to open up the conversation about eating disorders within the fitness industry, and empower fitness professionals to educate themselves in recognising, approaching and referring clients with eating disorders. “We always advocate fitness professionals remain within the remits of their qualification,” added Carly. “This means you can act as a confidant or trusted expert to a certain extent, but if an eating disorder presents itself, it’s important to be able to signpost a client to the medical professional (their doctor) or organisations such as Beat Eating Disorders Charity (BEAT) or Anorexia Bulimia Care charity (ABC).” The duo believe that the taboo stems from the fear of saying the wrong thing. “People are worried about potentially offending clients...and the consequences of speaking out,” said Leah. “All of these worries mean it can sometimes feel easier to say nothing at all.” Both acknowledge that it can be tough to recognise signs of an eating disorder, as different

Carly Wilkinson and Leah Newton. people may show signs of different eating disorders very differently. Leah added: “Very basic indicators to be sensitive towards are clients training for unusually extended periods of time, several times a day (particularly if they’re trying to hide this behaviour) or at an unsustainable intensity. “Clients setting goals of weight loss which seem extreme, or showing a pre-occupation with their weight...clients showing signs of exhaustion, physical weakness or fatigue. And finally, clients training to elite levels when this is not their occupation.” So, if a fitness professional suspects a client may be suffering from an eating disorder, how should they approach the topic? “We have spoken to numerous individuals who have suffered/are suffering from eating disorders to hear their thoughts on how they’d prefer to be approached,” both explain. “Many highlighted how they would appreciate it

if fitness professionals approached them showing general concern for their wellbeing, without specifically targeting aesthetics or physical weight.” Suggested icebreakers include ‘You’ve been working out here a lot this week, is everything okay?’ or ‘I’ve noticed that you don’t appear to be enjoying this class/gym session as much as normal…is this something you want to chat through with me?’ The campaign also aims to see education on eating disorders introduced for people studying to be fitness instructors. When taking her qualification, Carly says, eating disorders “weren’t even mentioned in the module dealing with special populations.” Until this training is implemented, she advises professionals to make clients feel “safe rather than shamed,” and to reassure clients ‘I’m here to chat about any concerns to do with exercise or food’ at the end of each class. Carly said: “We are campaigning to empower fitness professionals to seek further education, and do not and cannot take responsibility for educating people on how to recognise and refer clients with eating disorders.” Fitness environments are also encouraged to adjust how they address clients. “Language is critical,” Leah said. “In a group setting, instructors need to be aware that they may have a broad range of clients, with varying needs and histories in their classes. Therefore, their language must cater for all.” Fear-based motivation (‘shredding for the wedding,’ etc.) must be stamped out, she urges, as it can be triggering and highlight the need to exercise for aesthetic reasons, rather than to feel good in your body and mind. “Additionally, fitness settings often have multiple resources available for weight loss programmes or fitness challenges,” she concluded. “However, it’s rare to see signposting for eating disorder support.” They believe there will be individuals within a fitness setting who could benefit from seeing such information, and it could form a small, potentially significant part of their step to recovery. “It shows that fitness settings not only care, but also are aware that not everyone that walks through their doors are there for the healthiest reasons.”

Dutch boutique brand partners with Myzone BOUTIQUE fitness brand SWITCH The Gym has launched its second studio in The Netherlands, just three months after the launch of its first site in Veldhoven. A third studio is due to open this quarter. Founded by Terry Labee, the new studio in Eindhoven offers a timetable of high intensity group workouts led by a coach. A personal trainer for 10 years, Terry wanted to bring the benefits of PT to those who couldn’t afford one-to-one training “SWITCH is for everyone who wants to achieve results. It offers the fun and energy of group training with the attention and expertise of personal training, but without the expense,” he said. Data and technology sit at the heart of the concept, which includes striking LED lighting and cutting-edge surround sound. Terry has worked in partnership with Myzone to develop a bespoke SWITCH app that utilises the heart rate tracking technology to motivate participants during their sessions. All members wear a Myzone belt during the

workouts which sends real time data to screens in the studio as well as the app. “Data is only useful if it is user-friendly and easily understood, which is why we have developed the SWITCH app using Myzone’s algorithms and data,” he added. “The big advantage of heart rate training at SWITCH is that it makes all members equal because everyone trains at the same intensity regardless of their level of fitness. “It means everyone can train together, whether they are beginner or advanced, young or old. “This creates a really good atmosphere in the studio and keeps members motivated during the classes.” A third studio is set to open in Tilburg, The Netherlands this quarter, with further plans for expansion in Germany and Belgium. “We’ve enjoyed working with Terry and the talented team at SWITCH to help them take the first steps in realising their huge ambition, and we look forward to a successful partnership as both of our brands grow across Europe,” said Jonathan Monks, director, EMEA at Myzone. 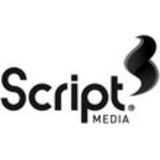