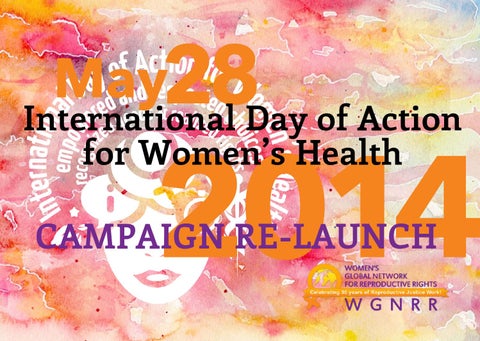 understood within a limited and narrow understanding of “maternal health,” neglecting our human right to freely and fully decide upon all aspects of our body, our sexuality and our lives.

With the re-launch of the May 28 campaign we are calling on governments, UN bodies, and the international community to ensure a holistic, inclusive, and human rights-based approach to women and girlsâ&amp;#x20AC;&amp;#x2122; SRHR in the Post-2015 Development Agenda.

MAY 28 AT THE GLOBAL LEVEL:

to serve as an information hub for campaign materials (May 28 toolkit, posters, stickers, logos) as well as a collaborative platform from which partners and allies highlighted key SRHR challenges, concerns and priorities

WGNRR launched a massive May 28 shout out through Thunderclap

Campaign partners, participants and allies worldwide ran a 24hour May 28 Tweet-a-thon across continents and time zones.

In collaboration with May 28 partners, WGNRR launched a comprehensive Call for Action which received

MAY 28 AT THE GROUND LEVEL:

HERE ARE SOME OF THE HIGHLIGHTS! In Romania the International Research &amp; Exchanges Board (IREX) launched SEXUL vs. BARZA (Sex vs. Stork), an online sexuality education video platform and held a real life sexuality education class for high school students. “Interesting and pleasant experience” “This sort of session something very normal that all schools in Romania should adopt”

In Sierra Leone, Ipas invited 150 women living in the rural area of Freetown to a dinner to candidly discuss women’s health issues in a safe space.. ….rape….teenage pregnancy...abortion… menopause and sex… Pledge: provide support to an abortion law review in Sierra Leone

In Nicaragua, Collectivo Feminista Panteras Rojas informed commuters at a transit point near the Central American University in Managua about May 28 and the importance of women-centric services.

400 people reached Realizing change one chat at a time

In the Philippines, WGNRR in collaboration with Upstart Productions staged a dramatic reading of the thought-provoking â&amp;#x20AC;&amp;#x153;Baby Danceâ&amp;#x20AC;? by Jan Anderson, a play exploring complex issues surrounding surrogacy, inequality, and reproductive choices and rights.

In France, Médecins du Monde continued to promote its International campaign for women’s right to decide and for universal access to contraception and abortion.

NAMES NOT NUMBERS Médecins du Monde urges States to guarantee improved access to contraception as well as safe and legal abortion in order to respect and ensure women’s right to decide the course of their own lives.

In the county of Mombasa, Kenya, Pwani Gender Based Violence Network celebrated May 28 by mobilizing 280 people from the community and disseminating information on policies and laws that protect womenâ&amp;#x20AC;&amp;#x2122;s basic rights of deciding what to do with their own bodies.

More in Kenya Dandelion Kenya in partnership with Family Health Options Kenya invited 47 young people for a dialogue centered around women and girls’ health needs, sexual and reproductive rights, and the role men can play in order to support the realization of SRHR.

Question: What should governments focus on in terms of women’s health in the post-2015 development agenda? Adequate Resource Allocation for SRHR Develop Women’s health friendly policies Bring an end to obstetric violence Address the needs of differently abled women

More in Kenya Fortress of Hope Africa organized a community dialogue in rural Kilifi CountyChonyi District, aimed at initiating a dialogue on womenâ&amp;#x20AC;&amp;#x2122;s health and rights among women and community leaders

250 participants Taking a stand against maternal mortality and obstetric violence.

In Tanzania, the Womenâ&amp;#x20AC;&amp;#x2122;s Promotion Centre together with the Western Zone based partners in the TSAA Project held a public event that raised the concerns of women and illustrated the challenges they face when seeking SRHR services and information

200 newly educated citizens 100 signatures to the Ministry of Health

In Uganda, Empowered at Dusk Womenâ&amp;#x20AC;&amp;#x2122;s Association (EDWA) held a community debate on the failure of states to recognize sexual and reproductive rights.

Abortions happen for a reason, not for the lack of reason.

In Peru, CLACAI and La Mesa por la Vida y la Salud de las Mujeres launched DIGNA campaign advocating the right for women to interrupt pregnancy resulting from rape. The campaign was promoted as part of the May 28 Campaign on behalf of the International Campaign of Womenâ&amp;#x20AC;&amp;#x2122;s Right to Safe Abortion.

As a woman I am able to get pregnant, carry it under my heart and give birth but this is my body and I have the right to decide when it happens.

In the gynaecologistâ&amp;#x20AC;&amp;#x2122;s office I want to be treated, not humiliated

If men could get pregnant contraception would be subsidized

I have the right to childbirth in dignified conditions

I have the right to a free home birth

Prochoice or no choice

Over 30 partners across the globe came together to support the relaunch of May 28 International Day of Action for Women's Health in 2014. Here are some highlights of the campaign in pictures, numbers and quotes. A more detailed account of each activity will follow in a narrative report shortly.