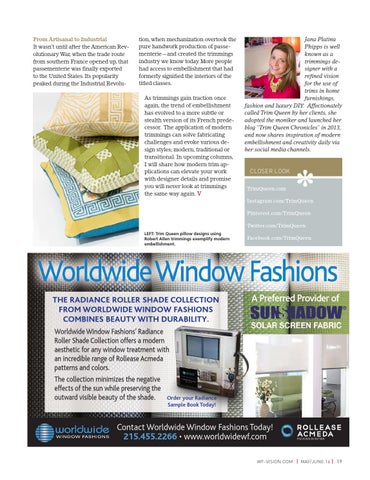 From Artisanal to Industrial It wasn’t until after the American Revolutionary War, when the trade route from southern France opened up, that passementerie was finally exported to the United States. Its popularity peaked during the Industrial Revolu-

tion, when mechanization overtook the pure handwork production of passementerie—and created the trimmings industry we know today. More people had access to embellishment that had formerly signified the interiors of the titled classes. As trimmings gain traction once again, the trend of embellishment has evolved to a more subtle or stealth version of its French predecessor. The application of modern trimmings can solve fabricating challenges and evoke various design styles; modern, traditional or transitional. In upcoming columns, I will share how modern trim applications can elevate your work with designer details and promise you will never look at trimmings the same way again. V

Jana Platina Phipps is well known as a trimmings designer with a refined vision for the use of trims in home furnishings, fashion and luxury DIY. Affectionately called Trim Queen by her clients, she adopted the moniker and launched her blog &quot;Trim Queen Chronicles&quot; in 2013, and now shares inspiration of modern embellishment and creativity daily via her social media channels.

A Preferred Provider of

Worldwide Window Fashions’ Radiance Roller Shade Collection offers a modern aesthetic for any window treatment with an incredible range of Rollease Acmeda patterns and colors. The collection minimizes the negative effects of the sun while preserving the outward visible beauty of the shade. Order your Radiance Sample Book Today!

A special focus on the incredible expertise of workrooms featuring winners from the 2016 Ingenuity Workroom competition, as well as highlights from the Construction Zone at IWCE, with the Window Fashion Artisan Project installations. This issue also includes top designs from the 2016 Budget Blinds Inspired Drapes competition. 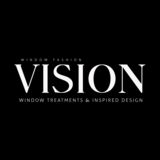