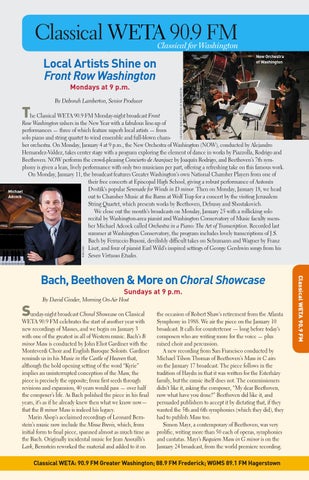 he Classical WETA 90.9 FM Monday-night broadcast Front Row Washington ushers in the New Year with a fabulous line-up of performances — three of which feature superb local artists — from solo piano and string quartet to wind ensemble and full-blown chamber orchestra. On Monday, January 4 at 9 p.m., the New Orchestra of Washington (NOW), conducted by Alejandro Hernandez-Valdez, takes center stage with a program exploring the element of dance in works by Piazzolla, Rodrigo and Beethoven. NOW performs the crowd-pleasing Concierto de Aranjuez by Joaquín Rodrigo, and Beethoven’s 7th symphony is given a lean, lively performance with only two musicians per part, offering a refreshing take on this famous work. On Monday, January 11, the broadcast features Greater Washington’s own National Chamber Players from one of their free concerts at Episcopal High School, giving a robust performance of Antonín Dvorˇák’s popular Serenade for Winds in D minor. Then on Monday, January 18, we head Michael Adcock out to Chamber Music at the Barns at Wolf Trap for a concert by the visiting Jerusalem String Quartet, which presents works by Beethoven, Debussy and Shostakovich. We close out the month’s broadcasts on Monday, January 25 with a rollicking solo recital by Washington-area pianist and Washington Conservatory of Music faculty member Michael Adcock called Orchestra in a Piano: The Art of Transcription. Recorded last summer at Washington Conservatory, the program includes lovely transcriptions of J.S. Bach by Ferruccio Busoni, devilishly difficult takes on Schumann and Wagner by Franz Liszt, and four of pianist Earl Wild’s inspired settings of George Gershwin songs from his Seven Virtuoso Etudes.

unday-night broadcast Choral Showcase on Classical WETA 90.9 FM celebrates the start of another year with new recordings of Masses, and we begin on January 3 with one of the greatest in all of Western music. Bach’s B minor Mass is conducted by John Eliot Gardiner with the Monteverdi Choir and English Baroque Soloists. Gardiner reminds us in his Music in the Castle of Heaven that, although the bold opening setting of the word “Kyrie” implies an uninterrupted conception of the Mass, the piece is precisely the opposite; from first seeds through revisions and expansion, 40 years would pass — over half the composer’s life. As Bach polished the piece in his final years, it’s as if he already knew then what we know now— that the B minor Mass is indeed his legacy. Marin Alsop’s acclaimed recordings of Leonard Bernstein’s music now include the Missa Brevis, which, from initial form to final piece, spanned almost as much time as the Bach. Originally incidental music for Jean Anouilh’s Lark, Bernstein reworked the material and added to it on

the occasion of Robert Shaw’s retirement from the Atlanta Symphony in 1988. We air the piece on the January 10 broadcast. It calls for countertenor — long before today’s composers who are writing more for the voice — plus mixed choir and percussion. A new recording from San Francisco conducted by Michael Tilson Thomas of Beethoven’s Mass in C airs on the January 17 broadcast. The piece follows in the tradition of Haydn in that it was written for the Esterházy family, but the music itself does not. The commissioners didn’t like it, asking the composer, “My dear Beethoven, now what have you done?” Beethoven did like it, and persuaded publishers to accept it by dictating that, if they wanted the 5th and 6th symphonies (which they did), they had to publish Mass too. Simon Mayr, a contemporary of Beethoven, was very prolific, writing more than 50 each of operas, symphonies and cantatas. Mayr’s Requiem Mass in G minor is on the January 24 broadcast, from the world premiere recording.

The WETA program guide features TV schedules, Classical WETA highlights, and updates on special events and more for the month ahead. 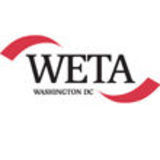