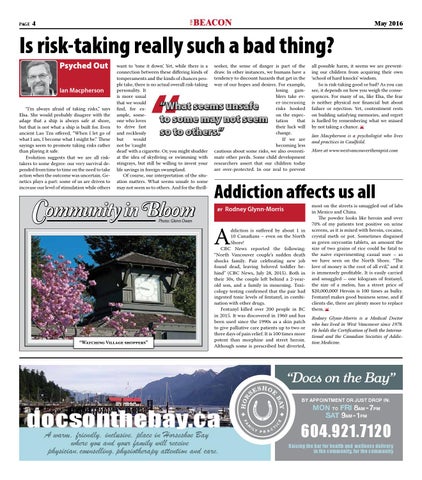 Is risk-taking really such a bad thing? Psyched Out Ian Macpherson “I’m always afraid of taking risks,” says Elsa. She would probably disagree with the adage that a ship is always safe at shore, but that is not what a ship is built for. Even ancient Lao Tzu offered, “When I let go of what I am, I become what I might be.” These sayings seem to promote taking risks rather than playing it safe. Evolution suggests that we are all risktakers to some degree: our very survival depended from time to time on the need to take action when the outcome was uncertain. Genetics plays a part: some of us are driven to increase our level of stimulation while others

want to ‘tone it down’. Yet, while there is a connection between these differing kinds of temperaments and the kinds of chances people take, there is no actual overall risk-taking personality. It is more usual that we would find, for example, someone who loves to drive fast and recklessly but would not be ‘caught dead’ with a cigarette. Or, you might shudder at the idea of skydiving or swimming with stingrays, but still be willing to invest your life savings in foreign swampland. Of course, our interpretation of the situation matters. What seems unsafe to some may not seem so to others. And for the thrill-

“What seems unsafe to some may not seem so to others.”

seeker, the sense of danger is part of the draw. In other instances, we humans have a tendency to discount hazards that get in the way of our hopes and desires. For example, losing gamblers take ever-increasing risks hooked on the expectation that their luck will change. If we are becoming less cautious about some risks, we also overestimate other perils. Some child development researchers assert that our children today are over-protected. In our zeal to prevent

all possible harm, it seems we are preventing our children from acquiring their own ‘school of hard knocks’ wisdom. So is risk-taking good or bad? As you can see, it depends on how you weigh the consequences. For many of us, like Elsa, the fear is neither physical nor financial but about failure or rejection. Yet, contentment rests on building satisfying memories, and regret is fuelled by remembering what we missed by not taking a chance. Ian Macpherson is a psychologist who lives and practices in Caulfeild. More at www.westvancouvertherapist.com

Addiction affects us all by

ddiction is suffered by about 1 in 10 Canadians – even on the North Shore! CBC News reported the following: “North Vancouver couple’s sudden death shocks family. Pair celebrating new job found dead, leaving beloved toddler behind” (CBC News, July 28, 2015). Both in their 30s, the couple left behind a 2-yearold son, and a family in mourning. Toxicology testing confirmed that the pair had ingested toxic levels of fentanyl, in combination with other drugs. Fentanyl killed over 200 people in BC in 2015. It was discovered in 1960 and has been used since the 1990s as a skin patch to give palliative care patients up to two or three days of pain relief. It is 100 times more potent than morphine and street heroin. Although some is prescribed but diverted,

docsonthebay.ca A warm, friendly, inclusive, place in Horseshoe Bay where you and your family will receive physician,counselling, physiotherapy attention and care.

most on the streets is smuggled out of labs in Mexico and China. The powder looks like heroin and over 70% of my patients test positive on urine screens, as it is mixed with heroin, cocaine, crystal meth or pot. Sometimes disguised as green oxycontin tablets, an amount the size of two grains of rice could be fatal to the naive experimenting casual user – as we have seen on the North Shore. “The love of money is the root of all evil,” and it is immensely profitable. It is easily carried and smuggled – one kilogram of fentanyl, the size of a melon, has a street price of $20,000,000! Heroin is 100 times as bulky. Fentanyl makes good business sense, and if clients die, there are plenty more to replace them.

Rodney Glynn-Morris is a Medical Doctor who has lived in West Vancouver since 1978. He holds the Certification of both the International and the Canadian Societies of Addiction Medicine.

BY APPOINTMENT OR JUST DROP IN: 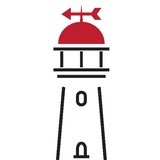