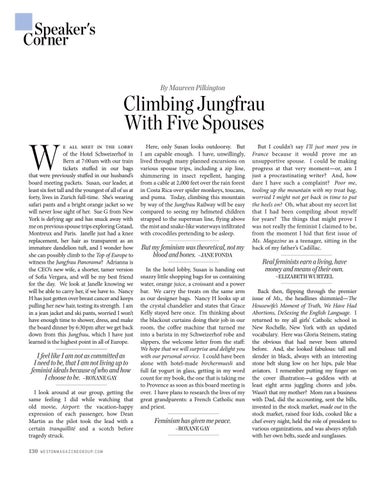 e all meet in the lobby of the Hotel Schweizerhof in Bern at 7:00am with our train tickets stuffed in our bags that were previously stuffed in our husband’s board meeting packets. Susan, our leader, at least six feet tall and the youngest of all of us at forty, lives in Zurich full-time. She’s wearing safari pants and a bright orange jacket so we will never lose sight of her. Sue G from New York is defying age and has snuck away with me on previous spouse trips exploring Gstaad, Montreux and Paris. Janelle just had a knee replacement, her hair as transparent as an immature dandelion tuft, and I wonder how she can possibly climb to the Top of Europe to witness the Jungfrau Panorama? Adrianna is the CEO’s new wife, a shorter, tamer version of Sofia Vergara, and will be my best friend for the day. We look at Janelle knowing we will be able to carry her, if we have to. Nancy H has just gotten over breast cancer and keeps pulling her new hair, testing its strength. I am in a jean jacket and ski pants, worried I won’t have enough time to shower, dress, and make the board dinner by 6:30pm after we get back down from this Jungfrau, which I have just learned is the highest point in all of Europe.

I feel like I am not as committed as I need to be, that I am not living up to feminist ideals because of who and how I choose to be. –ROXANE GAY I look around at our group, getting the same feeling I did while watching that old movie, Airport: the vacation-happy expression of each passenger, how Dean Martin as the pilot took the lead with a certain tranquillité and a scotch before tragedy struck. 130

Here, only Susan looks outdoorsy. But I am capable enough. I have, unwillingly, lived through many planned excursions on various spouse trips, including a zip line, shimmering in insect repellent, hanging from a cable at 2,000 feet over the rain forest in Costa Rica over spider monkeys, toucans, and puma. Today, climbing this mountain by way of the Jungfrau Railway will be easy compared to seeing my helmeted children strapped to the superman line, flying above the mist and snake-like waterways infiltrated with crocodiles pretending to be asleep.

But my feminism was theoretical, not my blood and bones. –JANE FONDA In the hotel lobby, Susan is handing out snazzy little shopping bags for us containing water, orange juice, a croissant and a power bar. We carry the treats on the same arm as our designer bags. Nancy H looks up at the crystal chandelier and states that Grace Kelly stayed here once. I’m thinking about the blackout curtains doing their job in our room, the coffee machine that turned me into a barista in my Schweizerhof robe and slippers, the welcome letter from the staff: We hope that we will surprise and delight you with our personal service. I could have been alone with hotel-made birchermuesli and full fat yogurt in glass, getting in my word count for my book, the one that is taking me to Provence as soon as this board meeting is over. I have plans to research the lives of my great grandparents: a French Catholic nun and priest.

Feminism has given me peace. –ROXANE GAY

But But II couldn’t couldn’t say say I’ll I’ll just just meet meet you you in in France France because because itit would would prove prove me me an an unsupportive unsupportive spouse. spouse. II could could be be making making progress progress at at that that very very moment—or, moment—or, am am II just just aa procrastinating procrastinating writer? writer? And, And, how how dare dare II have have such such aa complaint? complaint? Poor Poor me, me, tooling tooling up up the the mountain mountain with with my my treat treat bag, bag, worried worried II might might not not get get back back in in time time to to put put the the heels heels on? on? Oh, Oh, what what about about my my secret secret list list that that II had had been been compiling compiling about about myself myself for for years? years? The The things things that that might might prove prove II was was not not really really the the feminist feminist II claimed claimed to to be, be, from from the the moment moment II hid hid that that first first issue issue of of Ms. Ms. Magazine Magazine as as aa teenager, teenager, sitting sitting in in the the back back of of my my father’s father’s Cadillac. Cadillac.

Back Back then, then, flipping flipping through through the the premier premier issue issue of of Ms., Ms., the the headlines headlines shimmied—The shimmied—The Housewife’s Housewife’s Moment Moment of of Truth, Truth, We We Have Have Had Had Abortions, Abortions, DeSexing DeSexing the the English English Language. Language. II returned returned to to my my all all girls’ girls’ Catholic Catholic school school in in New New Rochelle, Rochelle, New New York York with with an an updated updated vocabulary. vocabulary. Here Here was was Gloria Gloria Steinem, Steinem, stating stating the the obvious obvious that that had had never never been been uttered uttered before. before. And, And, she she looked looked fabulous: fabulous: tall tall and and slender slender in in black, black, always always with with an an interesting interesting stone stone belt belt slung slung low low on on her her hips, hips, pale pale blue blue aviators. aviators. II remember remember putting putting my my finger finger on on the the cover cover illustration—a illustration—a goddess goddess with with at at least least eight eight arms arms juggling juggling chores chores and and jobs. jobs. Wasn’t Wasn’t that that my my mother? mother? Mom Mom ran ran aa business business with with Dad, Dad, did did the the accounting, accounting, sent sent the the bills, bills, invested invested in in the the stock stock market, market, made made out out in in the the stock stock market, market, raised raised four four kids, kids, cooked cooked like like aa chef chef every every night, night, held held the the role role of of president president to to various various organizations, organizations, and and was was always always stylish stylish with with her her own own belts, belts, suede suedeand andsunglasses. sunglasses. 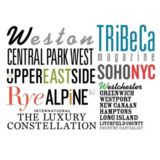